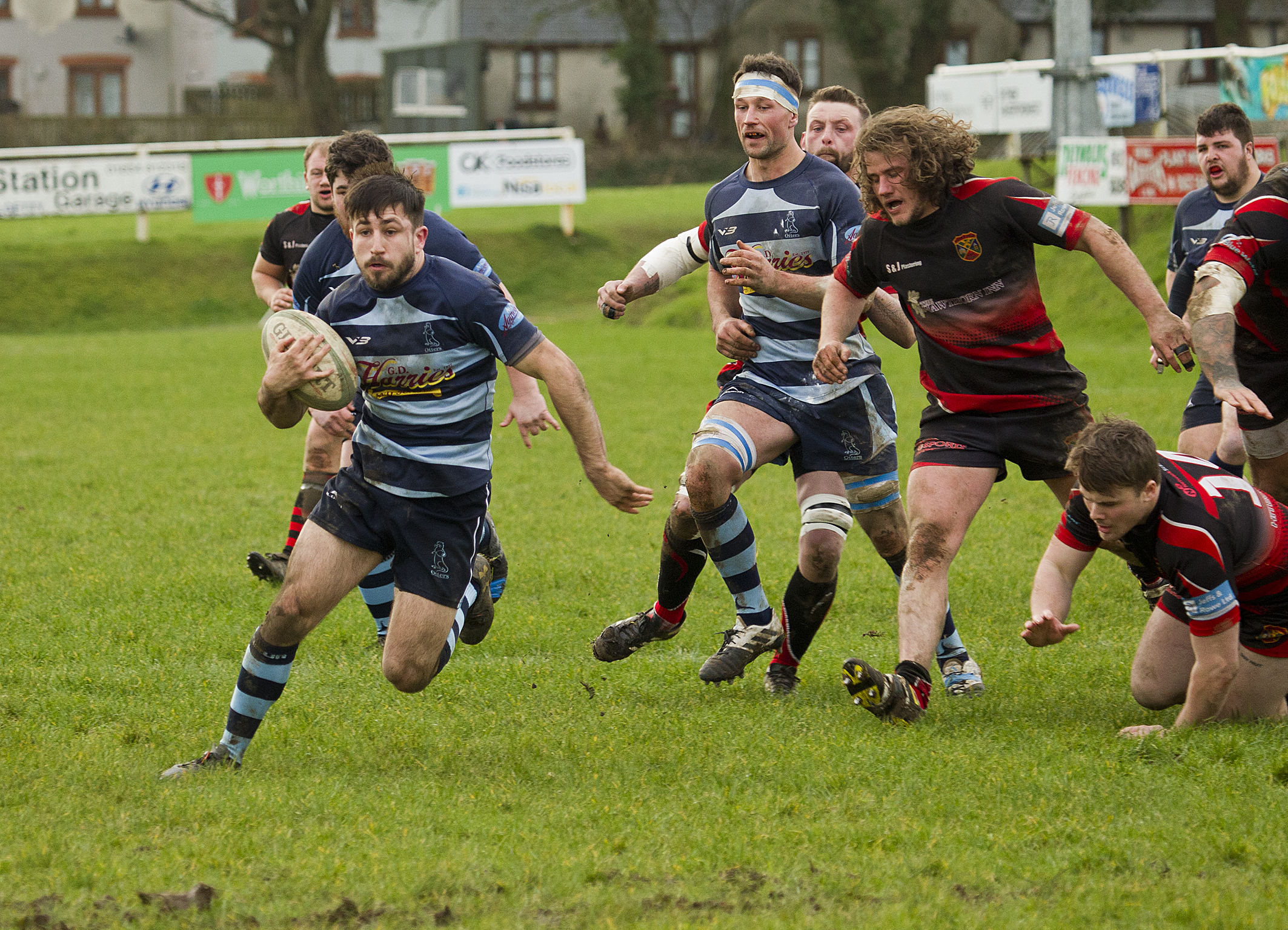 AFTER this emphatic, seven-try win over visiting Rhydyfelin on Saturday (Feb 9), Narberth climbed to third place in the WRU Championship and are still targeting second.

With just six games to go, Narberth have now won 13 of their 16 matches this season and are on course for yet another excellent campaign.

It was a double celebration for the Club on the day that local hero Jonathan Davies, who played all his junior rugby with the Otters, captained Wales for the first time in the victory over Italy in Rome.

The pitch was in remarkably good condition despite the battering it took in the rain of two weeks ago but the high winds that had dogged the Tata fixture were again evident. Narberth won the toss and again elected to play into the wind in the first half.

Narberth came into the game after a short break because of the calling off of their game at Maesteg Quins the previous Saturday. The postponement might well have been a blessing in disguise as it allowed the team to recover after the bruising encounters with Pontypool and Tata Steel.

Certainly, the Otters flew out of the blocks from the Rhydyfelin kick-off which was gathered by Richie Rees inside the Narberth 25 and moved slickly to the left. Fluent passing between forwards and backs and a strong run by wing Yannic Parker took the home side into the opposition 22. A neat chip by centre Jake Jenkins was gathered by flanker Tom Powell who scored unopposed in only the first minute. Against a gale force wind, Ianto Griffiths’ conversion attempt was just wide.

Rhydyfelin were stung into action and came back strongly and for the following 15 minutes, it was like Ground-hog Day with a stream of penalties – mostly in the visitors’ favour each leading to a five metre lineout. From the first of them, Rhydyfelin captain and outside half Ross Lucas kicked immaculately into the corner and the Otters were penalised for collapsing the ensuing rolling maul. Again, the visitors went to the corner but knocked on in trying to force the maul over the line and Narberth cleared the danger.

The driving maul seemed to be Rhydyfelin’s only attacking ploy as, in the 10th minute, they were awarded a penalty on the 22 metre line directly in front of the posts and to everyone’s surprise, they again kicked to the corner.

This time, in a smart move, prop Chris Phillips crashed over in the corner but the try was disallowed as the referee Steffan Edwards had spotted that Phillips’ path had been cleared of Narberth defenders by Rhydyfelin players and penalised them for obstruction.

In the 15th minute, the Otters were rather harshly penalised for a high tackle and yet again the visitors opted to go to the corner. When Rhydyfelin openside flanker Luke Studley knocked on, Narberth had weathered the storm of four successive five-metre lineouts and Rhydyfelin never again threatened.

The Otters’ lineout has not been at its best in recent weeks and again lost some of its clockwork accuracy on Saturday but, even against the strong wind, they gradually took complete control of the game and in the 29th minute, flanker Powell crashed over near the posts for his second try after a spell of sustained pressure and some excellent approach work by Richie Rees and Jake Jenkins.  Griffiths converted.

Five minutes later, Jenkins was again involved in a smart handling move and made a powerful run before being taken down just short of the line. The Otters regained the ball and Jenkins popped up to dive over and touch down just inside the corner flag.

The missed conversion meant Narberth went into half-time with a well-deserved 17-nil lead.

The whole game was peppered with penalty awards and in total, the home side were awarded 16 penalties against 10 for the visitors. Most of them were for niggly technical infringements and either side of half time referee Edwards issued yellow cards to second row Josh Hawkins for persistent offside offences and left wing Gavin Close for a deliberate knock-on.

For a couple of minutes early in the second half, Rhydyfelin were reduced to 13 men after replacement prop Callum Jones who had only been on the field six minutes was sin-binned when he was at the centre of a touchline fracas. There were a number of heated moments in the game as Rhydyfelin’s frustration boiled over but further trouble was avoided by the firm and decisive action by the young referee.

It took just six minutes of the second half for the home side to gain their bonus point try, this time from young scrum half Lewys Gibby. Receiving the ball from a lineout outside the Rhydyfelin 22, Gibby wrong-footed the back row with a cheeky dummy and sprinted in, completely unopposed. Again Griffiths converted.

The tide was now running fast against the visiting side and the two yellow card dismissals meant they were in some disarray, but they still tackled determinedly.

Their grit was not enough to prevent a 58th minute try when Jack Price, playing on the wing at the time, proved Rhydyfelin were suckers for the dummy as he showed fullback Chris Tottle the ball before stepping inside him to score at the posts. Ianto Griffiths duly completed his third conversion.

Two minutes later, it was two-try hero Tom Powell’s turn to see Narberth’s only yellow card of the game, this time for what the referee adjudicated was a deliberate knock on. Two tries in the last five minutes rounded off the game for Narberth. The first, from a five metre scrum was made by a pickup by number eight Richie Rees who broke to the blind side and passed to Gibby.

The scrum half’s diagonal run brought him his second try of the game and then right on time, an elegant chip by full back Ianto Griffiths over the top of the approaching defence was kicked ahead by replacement wing Nick Gale just inside the left touchline and he neatly gathered to score in the corner.

The Otters completed the double over mid-table Rhydyfelin and in their two encounters this season, have amassed 77 points against the side from Pontypridd.

It was also a game in which the replacements also made a real impact, with props Dan Jacobs and young Ryan Rees making major contributions in both the tight and loose when they came on. Second row Roy Osborne made a robust and very promising debut for the Otters.

The Otters are home again on Saturday (Feb 16) with the visit of Trebanos, the Swansea Valley side who boast Justin Tipuric, the Welsh flanker as one of their coaching advisers. Trebanos always play an open style of rugby so it promises to be an attractive game to watch.