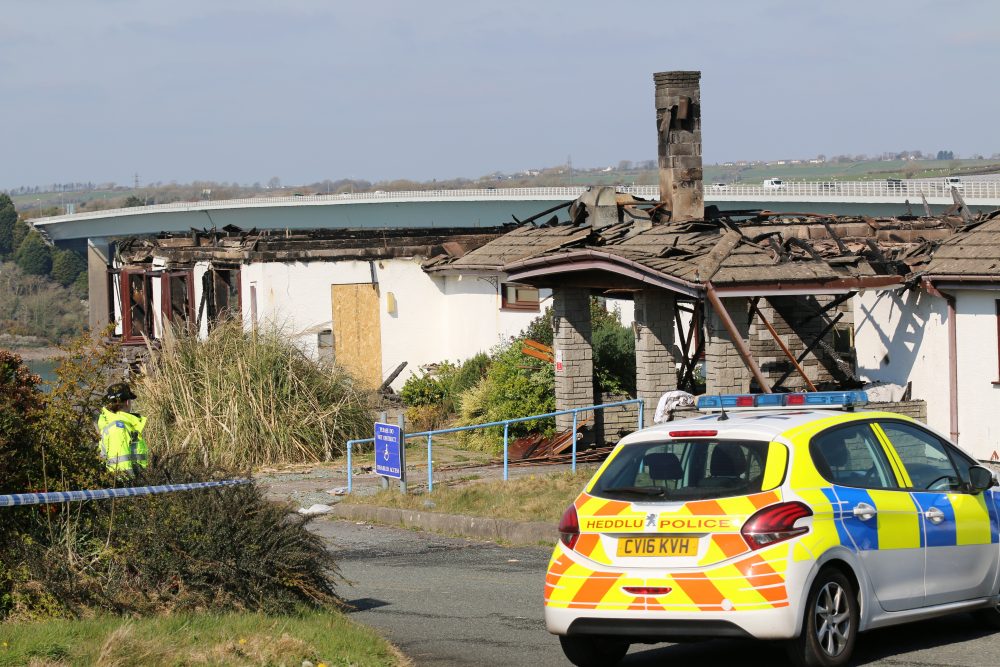 A PEMBROKESHIRE county councillor has called on the police and fire investigators looking into a hotel fire to leave no stone unturned to find the true cause.

The major blaze broke out at the Cleddau Bridge Hotel in Pembroke Dock over the weekend, with emergency services in attendance from 2.49am on Saturday Morning (Mar 30).

Cllr Joshua Beynon, whose ward area includes the hotel, said that anyone reading the history of the hotel “could rightly ask themselves whether or not this is just one big coincidence.”

His comments come after over a hundred people took to Facebook to say that they thought that the fire was an ‘insurance job’.

There is absolutely no suggestion that there is anything to substantiate these allegations.

Mr David Hancock Mid and West Wales Fire and Rescue group manager said: “It is too early to tell at the moment what the cause was.”

“A full investigation will be conducted with police and fire later on with a view to establish what happened”, he added.

The hotel suddenly closed on January 2 last year, with some 40 members of staff losing their jobs. Creditors including Pembrokeshire County Council and HM Revenue & Customs, were owed nearly £130,000 by the Kullar Hotel Group which owned the premises. Speaking to The Herald, Cllr Joshua Beynon said: “It is a sad moment when a once busy and looked after hotel is first abandoned and then burnt to the ground in the middle of the night. I am extremely interested in making sure that the fire is investigated and if it is found that arson is in fact the cause of the fire, that the perpetrator(s) are brought to justice.”

He added: “The building has a long and complicated history which started when the owners, the Kullar family gave staff a bear 6 days notice at the end of 2017 and did not pay them any redundancy pay or for their notice period, which they are of course legally entitled to.

“The building then was subject to a planning application during the summer of 2018 which was approved to turn the former hotel into a care home. As a residence of Llanion, I have witnessed and had numerous phone-calls about the mess in the grounds of the hotel as over the past few weeks, anything of value has been removed from the hotel as the rooms and building were cleared of assets. “This was clear from the debris in the grounds which was everything from furniture to pots and pans from the kitchen.

“Whilst it would be wrong for me to categorically conclude one way or another what started the fire, anyone reading the history of the hotel could rightly ask themselves whether or not this is just one big coincidence.

“The people of Pembroke Dock are now left with a half burnt building that serves as a sad reminder of its recent history.

“I will be following the investigation closely and I would urge anyone who saw anything in the early hours of the morning on Saturday 30th March to contact the Police.”

How the fire investigation will work

In common with many forensic disciplines, one of the early tasks of fire investigation is often to determine whether or not a crime has been committed. The difficulty of determining whether arson has occurred arises because fire often destroys the key evidence of its origin.

Many fires are caused by defective equipment, such as shorting of faulty electrical circuits. Car fires can be caused by faulty fuel lines, and spontaneous combustion is possible where organic wastes are stored.

A fire investigator looks at the fire remains, and obtains information to reconstruct the sequence of events leading up to the fire.

One of the challenging aspects of fire investigation is the multi-disciplinary basis of the investigator’s job. As fires can be caused by or involve many ignition sources and fuels, fire investigators need to know not only the science of fire behavior, but also to have a working understanding of many different areas of study including construction, electricity, human behavior, and mechanical devices. For example, if there is a gas appliance at the origin of the fire, an investigator should know enough about appliances to either include or exclude it as a possible cause of the fire.

The building in question was empty and was formerly used as a hotel. The fire had affected the ground, first floor and roof space of the building and had damaged approximately half of the buildings structure.

Firefighters contained the fire, to the north and west elevations of the building, before extinguishing the fire using three hose reel jets, two main jets and a ground monitor. An aerial rescue platform and a drone were also deployed to the incident by the Fire Service.

The Fire Service left the incident at 09:53am.

This incident is being investigated by the Police and Fire Service.