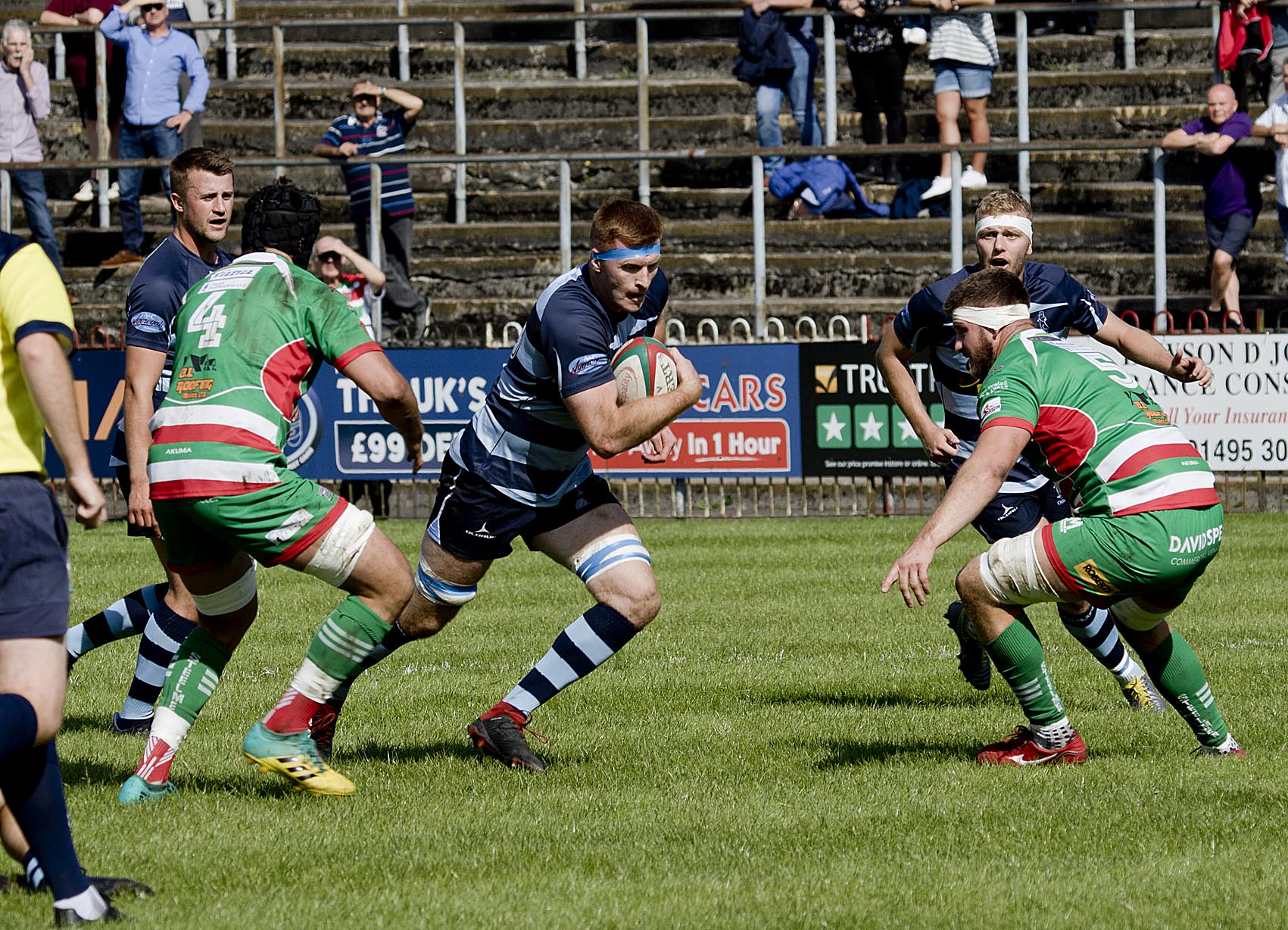 THE Otters made 10 changes to the starting line up following their successful win the previous week.

In the pre-match warm up it was noticeable how more muscular the Premiership players were compared to the Otters squad.

Ianto Griffiths kicked off and immediately the Steelmen showed their intent to cross the gain line but were penalised at the breakdown. Ebbw Vale scored 10 points in 8 minutes, the Steelmen scored their first try when full back Dan Haymond scored near the corner having stretched the Otters defence after play moved quickly across from left to right. Haymond failed to convert his try.

Two minutes later they scored again this time via wing Paul King. It seemed as though the Otters were giving Ebbw Vale too much respect. Again Haymond failed with the conversion. From the restart we saw Otters wing Yannick Parker sprint forward. The Otters were defending bravely but offended at a breakdown infront of the posts which gave Haymond an easy penalty kick bringing the score to 13-0 after 10 minutes.

Otters debut winger Josh Davies received the ball and raced diagonally to cross the try line taking a defender with him. Nick Gale stepped up to convert which brought the score to 13-7 on 13 minutes.

This gave the Otters heart and they began to turn the pressure onto Ebbw Vale.

For 16 minutes Ebbw Vale were pinned down on several occasions with both Ianto Griffiths and Nick Gale landing some strategic kicks whenever the Steelmen attempted to apply pressure back on the Otters.

Eventually the phased play saw the Otters win a penalty which Nick Gale converted with the score now 13-10 which rewarded the Otters determination to pressure Ebbw Vale. Then the Otters were penalised twice for breakdown infringements at the ruck. The second occasion on 33 minutes resulted in captain Alex Jenkins being yellow carded. This was a blow since he was leading the Otters well, especially in their defensive cover and urging the pack forward.

Now the Otters began to be stretched in their defensive system as Ebbw Vale turned on the pressure.

This saw some frantic defensive work but the Otters were eventually undone, when from a ruck scrum half Sam Ireland moved right and across passing on then running around to receive the final pass to score an unconverted try on 39 minutes.

Play went on into injury time and on 43 minutes flanker David Rubusniak scored when Ebbw Vale set up a rolling maul from a lineout. The conversion was kicked again by Dan Haymond. The score at half time was 25-10.

The second half restarted with Alex Jenkins still in the sin bin. Taking advantage Ebbw Vale scored again within 5 minutes. It came from a lineout on the Otters 22. The Steelmen safely controlled possession. They then set up a rolling maul, releasing the ball, they moved to the far corner where second row Lance Randall charged over the line for a try which Dan Haymond converted.

Alex Jenkins returned and no sooner was he on the field than Jake Baker was sent to the sin bin, yellow carded for a an adjudged deliberate knock on. This seemed a harsh decision since he intercepted a pass whose forceful travel caused the ball to bounce forward as it hit the second row’s hands.

Once again Ebbw Vale stepped up the pressure to take advantage of the situation. but the Otters refused to fold under the pressure.

The Otters supporters spirits were lifted when new wing Josh Davies almost broke through the Ebbw Vale defence. Ebbw Vale kicked to touch 10 metres from the line. Winning the lineout they set up another rolling maul. The maul collapsed but second row Dan Hill picked up the ball and using all his strength forced himself over the line for a try converted by Dan Haymond, at 67 minutes which took the score to 39-10.

On 75 minutes, Ebbw Vale suffered a yellow card with their inside centre having to take his place in the sin bin. Ebbw Vale defended strongly after sustained pressure and were now scrabbling to clear the ball as the tables turned. The sustained Otters pressure told when on 78 minutes Tom Powell went over for a try which Nick Gale converted. A few minutes later the referee blew for full time with the score 39-17.

Looking back the yellow cards amounted to over 20 minutes play with 14 men who could not control the increased pressure exerted by a strong Ebbw Vale side. This had a telling effect on the result.

Later Director of Rugby Sean Gale stated: “As a game of rugby it was excellent for the neutral observer. We scored some fantastic tries but the intensity between the Premiership and the Championship League is a bit different.

“When we were on the ball, we played some really good rugby but lost a little bit of concentration. We went down 10 points in about 10 minutes. So, the way we bounced back was really very good. Then when we had the yellow cards through which we gave them 26 points. We have got to be a little bit tighter and the concentration levels and intensity just lacked a little bit but the way my boys played today, I was really proud of their attempt to play.

“When we had our defensive patterns in place, we really shook Ebbw Vale up and really frightened them. In the set piece lineout, we lost too many lineouts but our scrum was as good as theirs and that was a big plus. We had a lot of youngsters out there today, we made 10 changes from the Tata Steel game, and the way in which some of those boys put their hands up was absolutely fantastic. It bodes well for the future of Narberth Rugby Club.

“It is difficult these days with the pressure of league rugby to give these lads an opportunity but they had a go today, up against a very strong Ebbw Vale side and did themselves proud, especially Alex Codd who did a good job and I thought Josh Davies in his first competitive game for the club was excellent. Harry Phillips was on one of his first starts and he was very positive. Then in the last 20 minutes we brought senior players on. Overall, the result was not good but the performance and grit within the team was excellent.”

Vikings too strong for Wizards

Quins put All Blacks to the sword