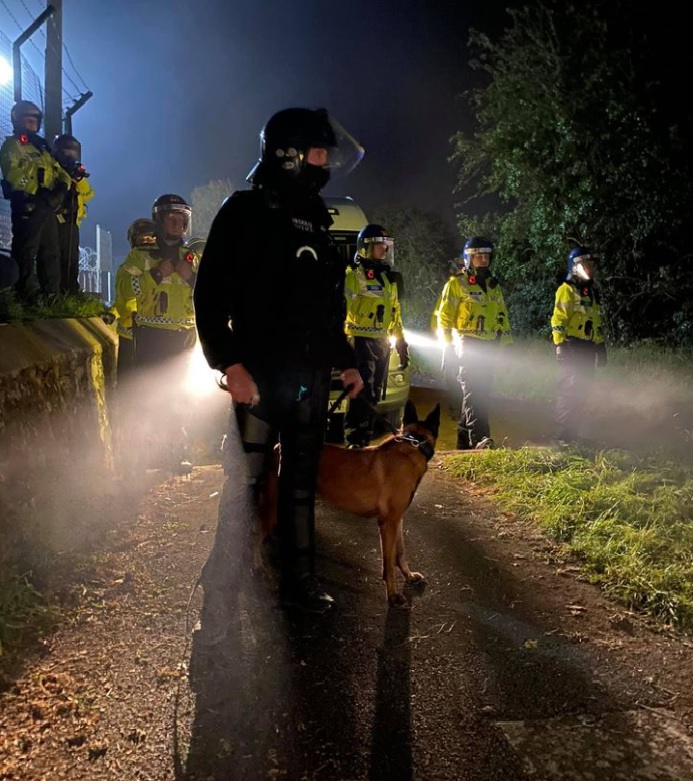 A FURTHER protest is planned for tonight in Penally. It follows a similar protest last night which saw demonstrators clash with police over the plan to use Penally Army Camp as a holding centre for 250 male asylum seekers.

Following last nights events, described by the Superintendent in charge of Pembrokeshire as dangerous, Anthony Evans said: “Dyfed-Powys Police is a service that relies on co-operation with our communities and we will always work to ensure that everyone’s voices are heard, in a peaceful and safe way. We understand that tensions are running high in the community, but last night’s scenes endangered everyone and caused understandable alarm. Police and protestors in stand off in Penally on Monday night (Pic: Herald)

“We are actively reviewing a significant amount of footage extracted from our officers’ body worn cameras, from footage shared to social media and intelligence obtained from other sources. Those identified committing criminal offences will be prosecuted – last night’s policing priority was to ensure the safety of everyone at the scene.

“We are in conversation with our partners across Pembrokeshire and are grateful to those in Penally and the surrounding community who are engaging with our officers on the ground and sharing concerns and information with us. Our history as a service is one of co-operation and we are working with partners across the county and the Home Office to get the support residents are asking for.”

Darren Edmundson, one of the protestors, told The Herald that there will be a huge protest tonight at Penally Camp.

He said: “We are expecting a large turnout of protestors tonight – many more than at previous protests.”

“We are expecting the protest to start at 6pm.”

“I am doing this because I am concerned for the safety of our family and our children as we don’t know the background of the asylum seekers. It has been confirmed that is just 250 men. Why not woman and children as well?

“There was a lack of communication prior to the protest. We wanted to know the facts etc.

“It was so disappointed to not see the council or any MPs turn up to answer any questions. Simon Hart should have been there.

“We feel that the camp should have been used to benefit the community especially the homeless.

“Wales has struggled for homelessness for years.”

In a further development, the local Police and Crime Commissioner, Dafydd Llywelyn has said that he attended a further meeting with Home Office officials and partner agencies today (Sept 22) to discuss the planned housing of approximately 250 asylum seekers at a military base in Pembrokeshire.

Mr Llywelyn said: “I am totally frustrated that the finer details involving numbers and timescales are being kept from local leaders and residents. There is a complete lack of ownership and leadership being shown by Ministers at the Home Office on this issue and this is disrespectful to the local community”.

The Crime Commissioner has actively been involved in ensuring adequate resources and planning is in place within Dyfed Powys Police since learning of the plans last week highlighting that the response by local leaders of service has been phenomenal. “I am grateful to the Home Office’s operational team in Wales who have supported the planning and I will continue to personally support this activity”.

Last week he wrote an open letter to the Home Secretary, noting local concerns of apparent lack of strategic planning.
The letter stated: “I reiterate once again what I emphasised in my letter to the Home Secretary last week, that greater strategic planning and engagement is needed to ensure we support and safeguard these vulnerable individuals and respond to local concerns.”

Penally County Councillor, Jon Preston, is urging Simon Hart MP to do more. He told The Herald that he has contacted the local MP saying the following: “As our representative at Westminster, you are the only one in any position to request that this location is re-considered. We have proven in the past that as a community we can rise to most challenges, however riots on the doorsteps of an elderly community is totally unacceptable.”

“The Home Office have breached their own guidelines placing these asylum seekers here in every respect and some of the threats of planned violence and criminal damage that I have heard being talked about by some outsiders in the protests is a matter of real concern.

“Can you please do all you can to get this awful decision by the UK government/ Home Office reversed as a matter of urgency. The situation is already having a bad effect on the physical and mental health of some Penally residents, myself included.

“I have not had one proper night’s sleep since this decision became known about to the local community last Monday. I have had no sleep at all last night because of the events described.”

Commenting on the clashes at Penally overnight local Member of the Welsh Parliament, Angela Burns MS said: “I was appalled to see the scenes overnight outside Penally Camp.

“I have been working closely with the County Council, Local Health Board and representatives from the UK and Welsh Government to try and find the best way to accommodate the Asylum Seekers whilst causing a minimal impact on the local community.

“Mistakes have been made and communication from the Home Office has been poor, but the scenes last night were upsetting and disgraceful and not the way to help resolve this issue.

“I am worried that the legitimate concerns of local people have been hijacked by people from outside of the area to make extreme political points. The videos demonstrated not only a total disregard for the rule of law, but a lack of respect for authority and for other human beings. It is not acceptable for mob rule to guide decisions taken by Government.

“I have already written to the Home Secretary to seek assurances and clarity on a number of concerns that both I and local people have about the location of the camp and whether the local community has the resources provide services for residents housed in the Penally Camp. I will be raising the matter later today with the First Minster in questions in the Welsh Parliament.”