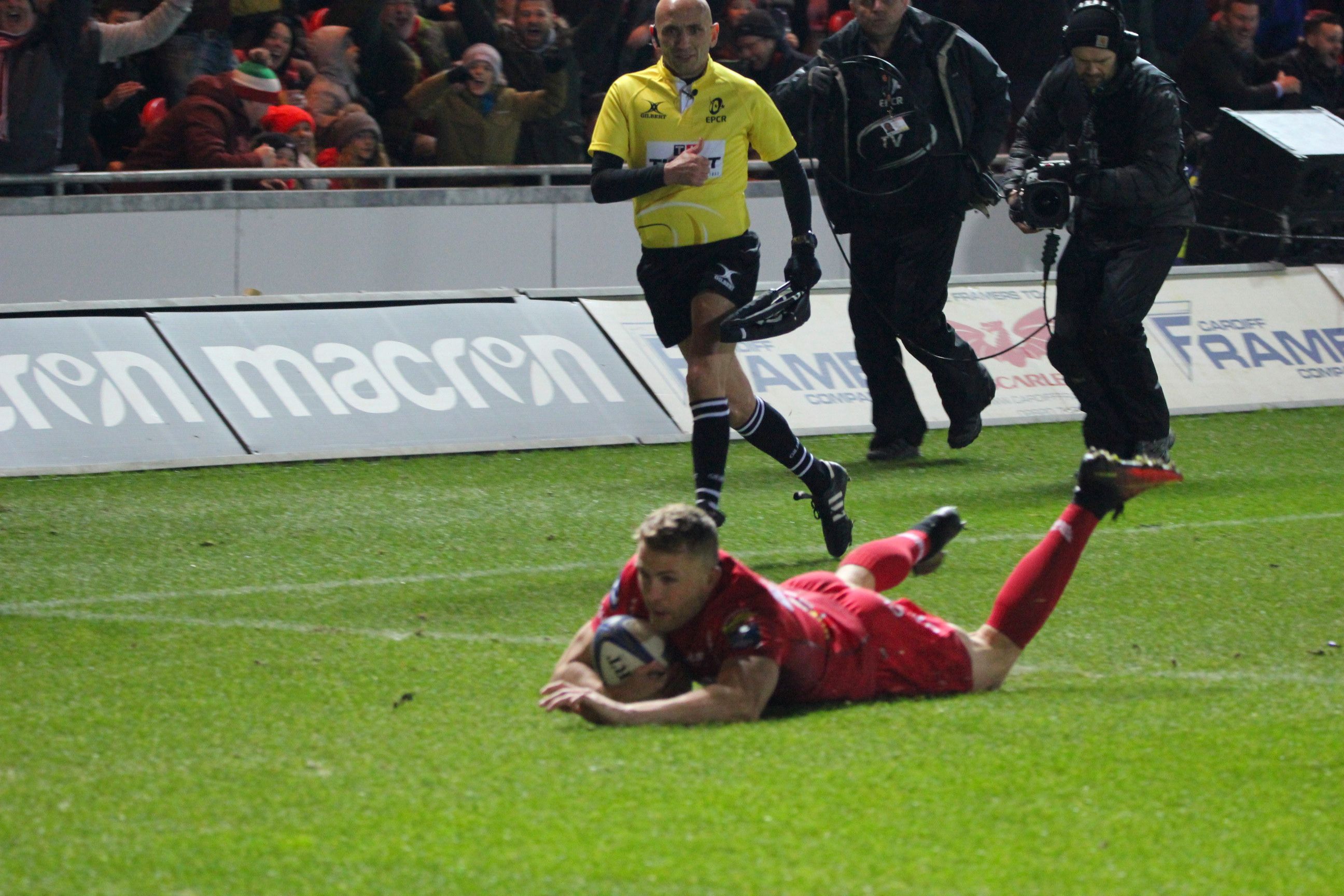 FOR the first time in 11 years the Scarlets have reached the European Cup quarter finals having secured a 30-27 victory on Saturday (Jan 20), over Toulon and in doing so replace them at the top of the group 5, which included Benetton Treviso and Bath.

It was not only the belief achieved from the victory the previous at the Recreation Ground Bath which set the barometer for Wayne Pivac’s men but the way it was won.

The game against Toulon was one which envigored all the sleeping giants from their slumber and Parc Y Scarlets became a cauldron of emotion as the weeks build up reached a crescendo.

The French visitor didn’t arrive just to enjoy the party and for long periods held the upper hand requiring the home side to search for some much need water for life. It came majestically from the Hydro North Stand, with a choral rendition worthy of any ‘Twmpath’ where the rousing beat echoed around a near full house capacity of 14,476.

The first half began where the Bath encounter had ended against Toulon, the three times winners who are also through to the knockout stages as one of the best runners up.

Free flowing rugby, utilising the space created from the impact runners led by skipper Ken Owens resulted in New Zealand winger Tom Prydie racing over in the third minute for try created by full back Rhys Patchell’s long pass, converted by outside half Dan Jones, who also converted a charged down effort from centre Hadleigh Parks before crossing himself under the posts to establish a 27-16 lead.

Toulon displayed the form which made them European kings as they responded immediately to Pyrdies opening try when a throw to the back of the line out by hooker Guilhem Guirado led to a disciplined drive from his fellow forwards, for Springbok number 8 Duane Vermeulan to touch down. Jones extended the lead to 10-5 as English referee Wayne Barnes whistle became centre of attention as he was consistently punishing indiscretions at the gain line, with outside half Anthony Belleau responding in kind and atoning for his earlier missed conversion.

The lead switched away from the Scarlets when England winger Chris Ashton intercepted Patchell’s loose pass in midfield to race 65 metres for a converted try. Bellau was at fault when the adopted ‘Kiwi’ centre Parkes scored, as his clearance kick was charged down by flanker Aaron Shingler who showed ‘Giggs’ like footballing skills for Jones to also add a penalty, before Bellau did the same.

The action was non stop, end to end and at times close to the knuckle with neither side wilting under the enormity of the prize for victory. The Scarlets game didn’t change with prop Rob Evans and a subdued Irish second row Thaig Beirne appearing in midfield to create chances.

Parkes was also instrumental in the third try as he cleared his lines, with Wales newest squad member James ‘Cubby’ Davies harrying to set up a prime front foot attacking position. The line out was secured, and quick hands allowed Jones to ghost in unopposed with Bellau ending the first half action with a penalty and 27-21 scoreboard in favour of the Scarlets.

The standard set in the first half was so high the following forty minutes would have done well to live up to it and such was the case, as it became like the day after the Lord Mayor’s Show. A positive for the home throng’s voices was the reappearance after injury for former Toulon full back Leigh Halfpenny, the Gorseinon born international content to ease himself back in with an accomplished final fifteen minute.

Absorbing the black tide was important; Davies with 23 and Owens with 21 led the troops into battle as the ‘billy cans brewed’ in the background, the side making a thumping 134 tackles.

Substitutions as is the norm in rugby at present played their part in a grinding second half. The Scarlets showed they could ‘dog it out’ to muster the required win, with the only points coming from the boot of replacement play maker Francois Trinh-Duc with the difference being a strike from 45 metres from Patchell on fifty minutes, although Trinh-Duc’s overtime drop kick from 30 metres came within a whisker of spoiling an ‘epic’ occassion.

Pivac would look at the replays for the game, noting with some concern the ease in which the French flair broke tackles and made good yardage. Toulon will be a tough opponent in the later stages of the competition as they arrived with out suspended international centre Mathieu Bastareaud but it will be the defence display which Pivac can take pride.

In the space of eight days the West Walians have shown their steel and panache, making the Easter weekend quarter final showdown with La Rochelle, travelling from the South West of France a potential blockbuster at Parc Y Scarlets.

Could this be the highest profile game witnessed in the modern rugby era? Rest assured it is the most important in over a decade.