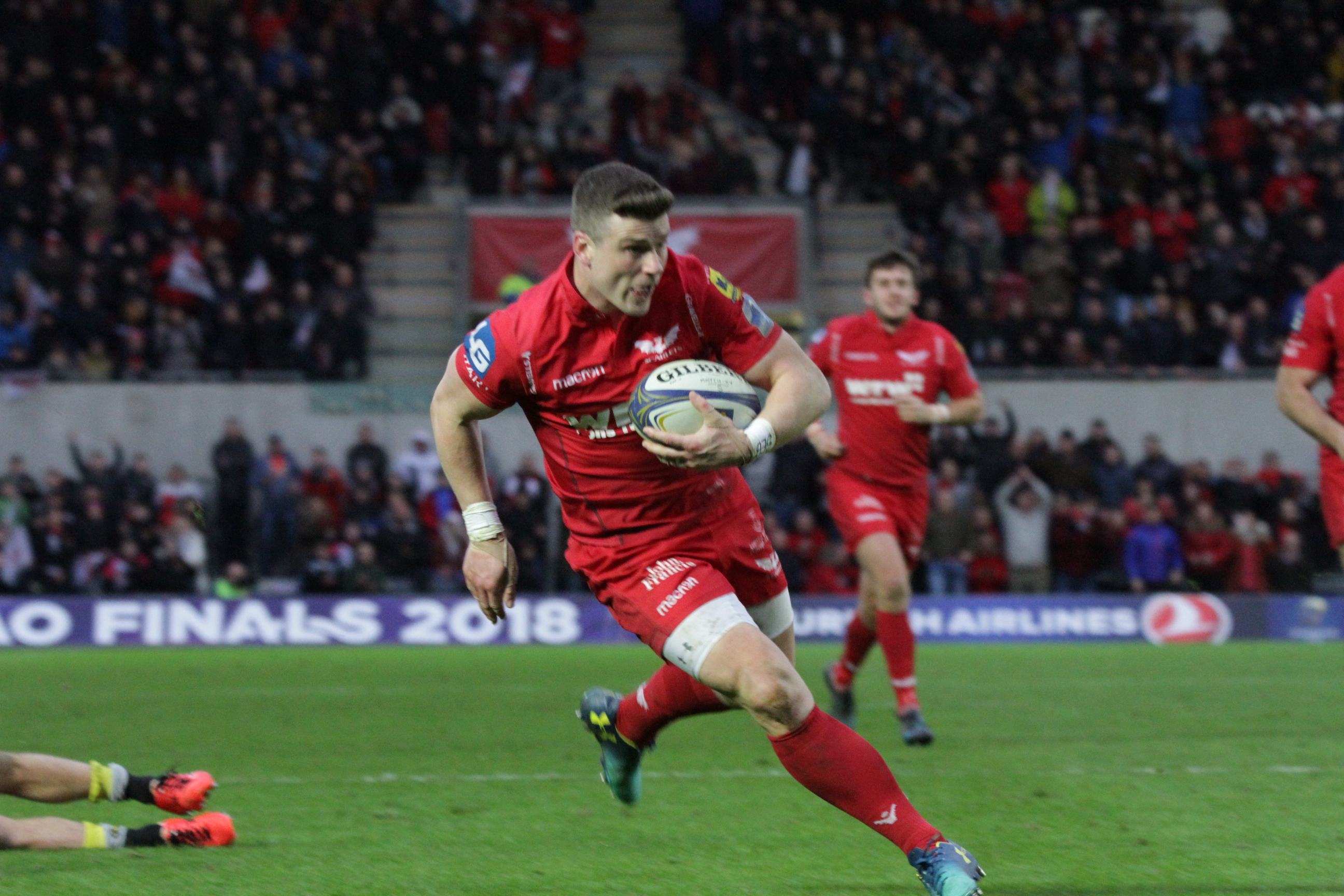 SUCH a magnificent occasion on Friday (Mar 30), a Quarter Final of the Heinekein European Cup in the depth of West Wales at Parc Y Scarlets, French giants, metaphorically and physically La Rochelle in town; reminiscent of King William in 1066, to conquer, greeted by a capacity 16,000 natives.

A warm message of welcome from European Rugby’s Chairman Simon Halliday, a flying England winger from the last millennium his roots stretched with longevity to his birth place, Haverfordwest in Pembrokeshire.

Like King William, having conquered the struggle for La Rochelle was to consolidate their assets, something they failed to do after securing an early 7-3 lead after six minutes, through a converted try by second row Romain Sazy.

Full back Leigh Halfpenny had struck with not five minutes played, a penalty for offside and reduced the lead a minute after the western based side on the Bay of Biscay’s touchdown, with an immaculate reproduction, this time from just inside his opponent’s half.

The Scarlets are a team of Samson Lees, the props uncompromising style making him a fans favourite, anchoring the choral Hymns and Arias at crescendo level. Prop Uini Atonio was stopped in his tracks likewise number 8 Afa Amosa, the Scarlets also winning the crucial first engagement at the scrum set piece, against a heavyweight eight, looking then to play their open game. ‘Try of the round in this seasons Champions Cup for the Scarlets’ Halliday had pronounced, not once but on two occasions. That is no mean feat looking at the quality on show in this seasons tournament, where Wayne Pivac’s charges have a skills set to crunch the shells of any snail in its way; able to up their game to push unseen boundaries making the Easter date of 2018 on par with 1066 for notability.

The fringes were rough and ready, robust tackling and yardage measured in centimetres on the gain line, drawing a mistake, Halfpenny obliging on 17 minutes for a 9-7 lead. Enter a new gladiator, Pontyberem junior Josh Mcloed to the amphitheatre for an injured Paul Asquith, feeding the crowd their ‘bread of heaven’ destructive if the truck and trailer before them, which would last all through the night.

‘Freestyle’ rugby witnessed in the cauldron a throwback to the ‘billy can’ victories over Bath at the Rec and Toulon acted as catalysts, the home side with a full complement internationals back in harness, awash with history from eleven years ago, Munster the fall guys, hooker Ken Owens the only player to have witnessed such an occasion before.

Kiwi centre Hadleigh Parkes couldn’t release a scoring pass as the outside cover closed in the twilight, the crowd aware that the breeze would favour the home side in the second half. Rhys Patchell at outside half was dictating direction as players lay strewn across the hallowed turf, the intensity of the conflict taking its toll, with scrum half Alexi Bales slotting a penalty on the half time whistle, his second successful kick for score of 12-10.

Man of the match Owens, an unbloodied hero took not one step back, leading his forwards into the mix in the second half, Aaron Shingler and Tadgh Beirne standing like beacons atop of Snowdon. Crammed to the rafters, the atmosphere electric the crowd played their part as the visiting juggernaut was stopped in its tracks as the Dragon roared fire. Puff the magic dragon, lived by the sea but in this case, unlike little boys, the Dragon would live long as the air from the Lougor estuary built mountains of men. Halfpenny stretched the lead, centre Arthur Retiere sensing his team needed some gusto cleverly built a pathway to the Scarlets line, as his side searched a first victory away from home in 2018.

The penalty count rose quickly, the Scarlets defence holding firm, as did English referee Luke Pearce issuing warnings as try scorer Sazy catch and drive was stopped, wave after wave of French delivery succumbing and the Scarlets, who released the tension as Davies quick tap and go took play over the halfway line.

‘Escargots’ are usually served as a starter in France and it was the dynamic home back row who broke this snails shell, as the definition suggests ‘eating them alive’ a slow and absorbing feast, garlic emanating from within the broken mollusc. Expensive these French snails maybe, both as a delicacy where 500,000,000 are consumed annually and from their bank role, which saw centre Pierrre Aguillon and Steve Barry wear their black coloured jersey. Snails, 80% water and 15% protein are easily consumed from the tongue, but beware of a marine cone snail, able to paralyse a fish instantly; a new nickname perhaps for the newest Welsh cap James Davies, Cubby now anything but a young fox, developing a name in his own right.

The final quarter saw Carmarthen Quins former star Dan Jones replace Steff Evans, the back line were ‘mustard’ as the diminutive youngster plays with a Gaelic flamboyance. Beirne set a driving maul from the line out, Parkes made a 20 metre break and Patchell, now at full back strode over before Halfpenny, with no nerves and his side led by twelve points at 22-10.

Beirne was a culprit as the visitors tactics of five metre line outs were stopped illegally, referee Pearce lenient, before heroic defence saw the lines cleared, the crowd restored to full voice. Inexplicably Halfpenny blotted his copybook after Bullring and replacement Werner Kruger dug deep the game in its final throws of glory.

The French side were unable to invade Scarlets territory, Owens and Parkes making headway before McLoed burnt a furrow on the touchline, Williams taking up the mantle, crossing from 25 metres unopposed, Halfpenny resumed normal service and the party in the park bellowed loud and clear.

Following the other quarter finals, Scarlets will now play Leinster in Dublin’s Aviva stadium on Saturday (April 21), the heart and soul of Llanelli left many a head ‘felinfoel’ the following day. Rest assured, Llanelli and the whole region are ‘quite alright’ as they entertain Glasgow Warriors on Saturday (Apr 7), no thought yet of the semi-final date with destiny.