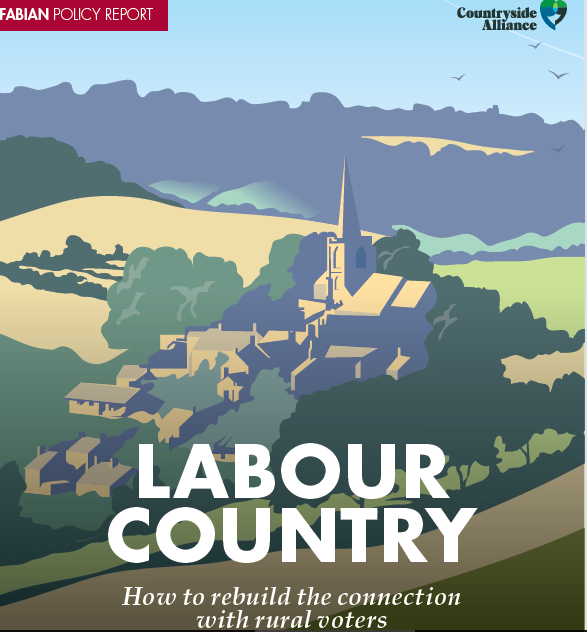 LABOUR must reconnect with the politics and culture of the countryside to be confident of winning the next general election, according to a new Fabian Society report published today. To secure a working majority the party will need to capitalise on the demise of Ukip and the decline of the Liberal Democrats and gain seats in both rural and semi-rural constituencies.

Labour Country, a new report from the Fabian Society, supported by the Countryside Alliance, shows Labour still has a way to go to win over rural voters. The report argues that to gain countryside seats Labour needs to be seen as ‘a natural party of the countryside’.

To win a UK majority, the party does not need to beat the Conservatives across all rural areas, but it does need to be competitive. Of Labour’s target seats ahead of the next general election, 16 are rural and a further 28 have at least 3,000 rural inhabitants. A YouGov/Fabian Society poll shows that as things stand:

But in better news for Labour, the party is ahead of the Conservatives in rural England and Wales among people aged under 50 (48 per cent to 36 per cent) and among those who voted remain in the EU referendum (45 per cent to 34 per cent). There are large numbers of both groups across rural England and Wales, despite the countryside being older and more Eurosceptic than the nation as a whole.

The report identifies the policy areas that are key to Labour rebuilding its connection with rural voters – including transport, housing and farming. But focus groups conducted for the report also show the party needs a shift in how it campaigns and organises to ‘rural-proof’ everything it does.

The report concludes that Labour’s next manifesto should set out an economic strategy that delivers for rural areas. It makes recommendations in four key policy areas:

“As the member of parliament for a rural constituency in West Cumbria, I know only too well how creaking Victorian infrastructure, rural poverty and a lack of employment opportunities for young people are leading to a growing disconnect between city and countryside. At the same time, austerity is leading to the steady erosion of the pubs and post offices, bank branches and local businesses that serve as the heart of so many of our small towns, villages and hamlets.

“This new report outlines positive recommendations for how to take on the Conservatives in their rural heartlands and deliver for rural communities across England and Wales.”

Andrew Harrop, general secretary at the Fabian Society said: “To win the next election Labour must gain seats with lots of rural voters and that will take a big shift in the way the party campaigns and organises. But there is room for optimism, with Labour now leading the Conservatives among rural voters under the age of 50.

“As a former Labour candidate in a rural seat, I know myself that the party is often dismissed as an ‘urban’ intruder that does not understand country life. Labour must prove to countryside voters that it is on their side with rural-friendly policies for saving banks, bus routes and countryside businesses.”

Baroness Ann Mallalieu, Labour peer and president of the Countryside Alliance said: “There is no doubt that there can be no future Labour government without improved support in the countryside, but this can only be achieved if the party gets serious about making a credible policy offer to the countryside. For too long Labour have conflated rural issues with animal issues, to the detriment of Labour’s vote in the countryside. This report lays out how Labour can correct this trend and challenge the Conservative party’s rural dominance, by speaking to the genuine concerns of people in the countryside.”