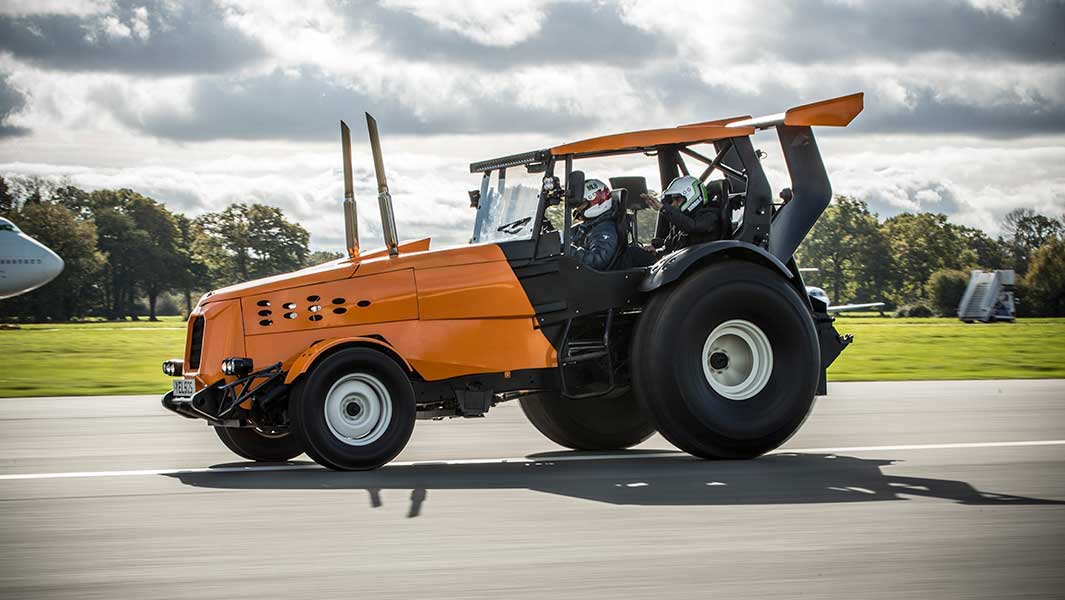 NO ONE wants to get stuck behind a tractor when they’re in a rush – but this customised Lamborghini-inspired farm vehicle is working to change that.

Built by engineers from British motoring TV show Top Gear, the ‘Track-tor’ has officially been named the world’s Fastest tractor (modified), after it was tested by the show’s tame racing driver, The Stig, in front of a Guinness World Records adjudicator.

The attempt took place at Bruntingthorpe Proving Ground – a former RAF aerodrome in Leicestershire, UK – where the 500-bhp tractor achieved 147.929 km/h (91.919 mph) on the first test run and 132.969 km/h (82.623 mph) on the return with an average taken of the two journeys to allow for potential advantages in either direction.

Top Gear presenter Matt LeBlanc was really excited about the unique vehicle, saying: “As the proud owner of no less than four tractors, you could say I’m a bit of an enthusiast. The theme of this week’s film is that tractors are blocking up Britain.

“When you get stuck behind one, you can’t go anywhere. So we’re trying to speed up farming. When Lewis Hamilton retires, this is what he’ll be driving!”

To hit this speed, the Top Gear team added a 5.7 litre Chevy V8 engine, 4-wheel brakes (typical tractors are only braked from the rear) and an adjustable air suspension system to the tractor.

Jack Brockbank, official Guinness World Records adjudicator commented: “To see The Stig hurtle past me in a tractor at 87mph was surreal, but hugely impressive. Equally as impressive is the engineering expertise of the Top Gear team that made this possible – the combination of their skills makes for brilliant record-breaking fun.”