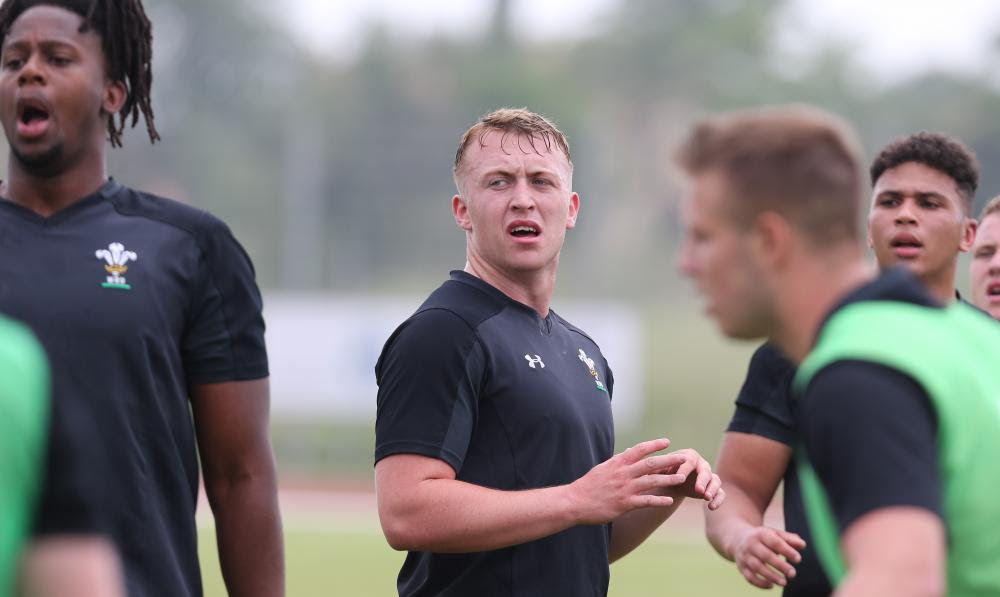 WALES have named their side to face Australia in this Wednesday’s (May 30) opening day of the World Rugby U20 Championship in Béziers (20:00 BST).

Cai Evans (Ospreys) starts at fullback, with Rio Dyer (Dragons) and Ryan Conbeer (Scarlets) on the wings. An all-Scarlet midfield features Ioan Nicholas at 12 and Corey Baldwin at 13, alongside a Cardiff Blues combination of fly-half Ben Jones and scrum-half Dane Blacker.

Loosehead Rhys Carre and hooker Iestyn Harris (both Cardiff Blues) are joined in the front row by tighthead Rhys Henry (Ospreys). There is considerable size in the second row, with Bath Rugby’s Rhys Davies and Dragons’ Max Williams each standing over 6’6” tall.

Blindside Tommy Reffell (Leicester Tigers, pictured) continues in the captaincy role he first took up during this year’s U20 Six Nations, with Dan Davis (Scarlets) and Taine Basham (Dragons) completing the energetic back row.

Three uncapped players are named on the bench: prop Rhys Davies (Scarlets), and two late call-ups to the squad in tighthead Will Davies-King (Cardiff Blues) and back rower Lewis Ellis-Jones (Scarlets).

“Selection has been very difficult, with the entire squad working hard and putting in lots of preparation for the World Rugby U20 Championship,” said head coach Geraint Lewis. “Competition for places is strong, but we’ve gone with the team which we feel is best suited to the challenge presented to us by Australia.”

“It’s quite an experienced team, with some players having enjoyed exposure to the Guinness Pro14 this year. Due to our approach during the Six Nations in giving opportunities to the entire squad, we’ve got a strong nucleus of players who are adept and happy at U20 level. Hopefully those experiences can hold them in good stead on Wednesday.”

The Junior Wallabies represent the first of three challenges in Wales’ pool, followed by New Zealand (June 3) and Japan (June 7). “Australia are a formidable rugby nation that always produce talented players,” Lewis said of a team Wales met in the pool stage last year in Georgia. “With the limited footage we’ve seen of them, we know they’re a big side, and from last year’s encounter we’re aware that they present a real challenge with ball in hand.”

Lewis accepted that the weather in the south of France might suit the Australian style of play, but insisted his team were equally looking forward to playing in such conditions. “It’s exciting for us to play southern hemisphere opposition, not least because it’s quite new for most of the squad. It’s what we’re here for: to test ourselves against the best.”

Wales U20 v Australia U20 at the Stade de la Méditerranée will be shown live on S4C, with coverage starting from 19:45 BST.

Wales U20 team to face Australia: