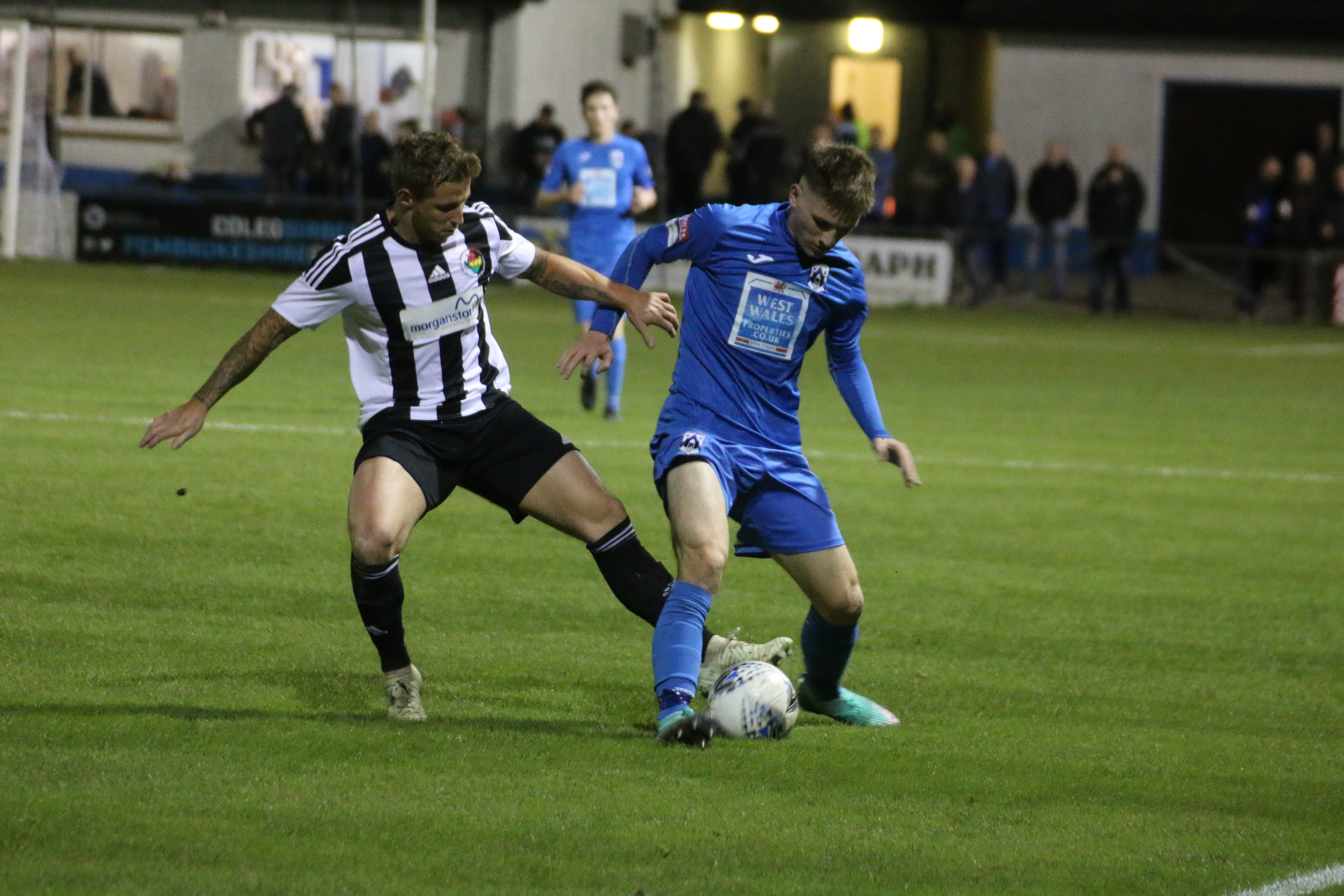 HAVERFORDWEST County closed the gap to Welsh League Division 1 leaders Penybont to just one point as they beat Ammanford 4-0 at the Bridge Meadow on Friday night (Oct 5).

A good crowd gathered to watch the game and they witnessed a slow start as both teams looked to gain the upper hand.

Both sides had early corners which came to nothing before the first real chance on seven minutes which saw Danny William flash the ball across the face of goal, just out of reach of the oncoming attackers.

With seventeen minutes gone the Bluebirds took the lead as Ricky Watts cut inside in the box before crossing to the back post for Ben Fawcett who fired the ball into the back of the net. Matthew Fisher then came close for Ammanford with a stinging shot that flew just wide of the left hand post.

Haverfordwest then won a series of corners but were unable to add to their lead.

From an Ammanford corner on the half hour mark the ball was not fully cleared and it came to Liam Samuel on the left hand edge of the box and his low effort bounced out off the base of the post and the danger was cleared.

Lee Trundle then curled an effort straight at Ammanford keeper Morris before Fawcett came within inches of doubling the Bluebird’s lead.

Trundle played the ball through for Fawcett to run on to and his effort was tipped wide into the side netting.

Danny Williams then beat the offside trap and with Ammanford still calling for offside he ran to the edge of the box before crossing to the back post for Trundle but his shot was pushed over the bar.

It remained 1-0 when the half time whistle went and Ammanford still had a chance of getting themselves back into the game.

The Bluebirds saw an effort go wide at the start of the second half before they did eventually double their lead ten minutes in. Trundle chested the ball down for Danny Williams who fired low into the corner.

Both sides had further chances but it was the home side who got the third goal when Trundle smashed the ball home from the edge of the box to all but seal the points with fifteen minutes to go.

Danny Williams then grabbed his second goal of the game with five minutes to go to make it 4-0.

Haverfordwest will be boosted by their win and their next game on Saturday (Oct 13) sees them travel to league leaders Penybont in what should be an excellent game.

Ammanford will look to get back to winning ways in their next game when they take on Llantwit Major.

Dragonhearts edged out by Serbia