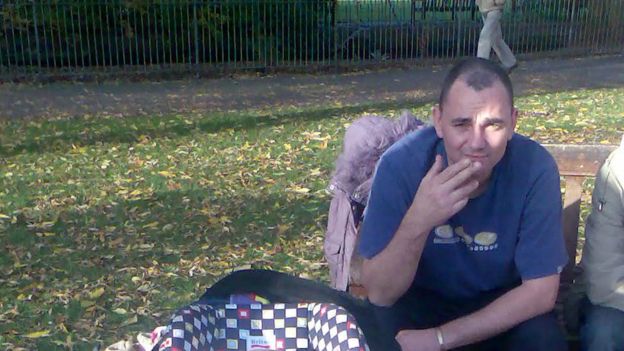 A HAVERFORDWEST woman says she feels she has been betrayed by the UK Government, after her partner died at the age of 40 in suspicious circumstances in India in April 2014.

Alison Barker, a mother of four, says the Foreign Office did not support her after she was told her partner, Andrew Raymond Rodick, was found ‘badly decomposed’ wrapped inside a bed sheet, blue plastic bags and carpet next to a marketplace in New Dehli.

He had been in India for two months, which included stays in Mumbai, Goa and New Dehli.

Following a post-mortem, it was found that Mr Rodick died from deep injuries on his head and face, which were inflicted by heavy objects. It was suspected he was tortured before he died, as he was found with his hands and feet tied together, and there were burns found on his arms, head and face, thought to have been caused by cigarette stubs and a lighter.

He was identified by his passport, which was found ‘badly damaged’ inside his pocket.

Indian police first treated his death as potentially drug related, however said they didn’t have ‘any clues’, except that they knew more than one person had been involved in his murder.

Ms Barker says that she felt pressured by the Foreign Office to agree to his cremation in India, stating they were ‘absolutely useless’. She also had to pay a £1,500 bill in order to have his body cremated, and have his ashes returned to the UK.

Speaking to the BBC, she said: “I was by myself with three children and there was no help, nobody came round and said ‘this is what you have to do now’. I was grieving and making an attempt to be strong for my children.”

Ms Barker found out about her partner’s death when two Dyfed-Powys Police officers attended her home address to inform her. She obtained a partial copy of the post-mortem report two years later, after appealing to local MP, Stephen Crabb to help her. However, it didn’t detail any toxicology results or the cause of his death.

She was sent the remaining details from the post-mortem last week – more than four years after her partner was murdered. However, it stated that Mr Rodick passed away after being poisoned by pregbalin: A drug used to treat epilepsy and anxiety.

The drug was found in Mr Rodick’s jeans pocket.

Ms Barker has said she does not accept the findings of the report given to her by the Foreign Office, and is upset and angry that it took her so long to receive the report in the first place.

At the time Mr Rodick died, Ms Barker was left with twin 9-year-old girls and a 7-year-old son. She had been in a relationship with Mr Barker for 12 years.

She said: “He loved his children. He was a family man, he loved walking the dog, music trips. He made my autistic son a bow and arrow out of sticks.

“He would take the kids swimming and took them to Legoland – he did a lot of ‘dad and son’ things, putting him on his shoulders and taking him to the park.”

A friend of Mr Rodick’s, Mr Tynan, added: “He was always really nice to me. We spoke on Facebook but I didn’t know why he had decided to go over to India. For this to happen to him is really disgusting. I can’t believe anyone would do anything to someone like that.

“When you don’t know someone and you hear news like this you think ‘how tragic, but when you know that person it hits you a lot harder.

A spokesperson from The Foreign Office said: “Where a death has occurred in violent circumstance, we will raise our interest with the local authority in the relevant country and request regular updates on any investigation or trial.

“We welcome feedback from British nationals who have received consular assistance and use that feedback to improve our services and staff training so we can provide the best possible assistance.”