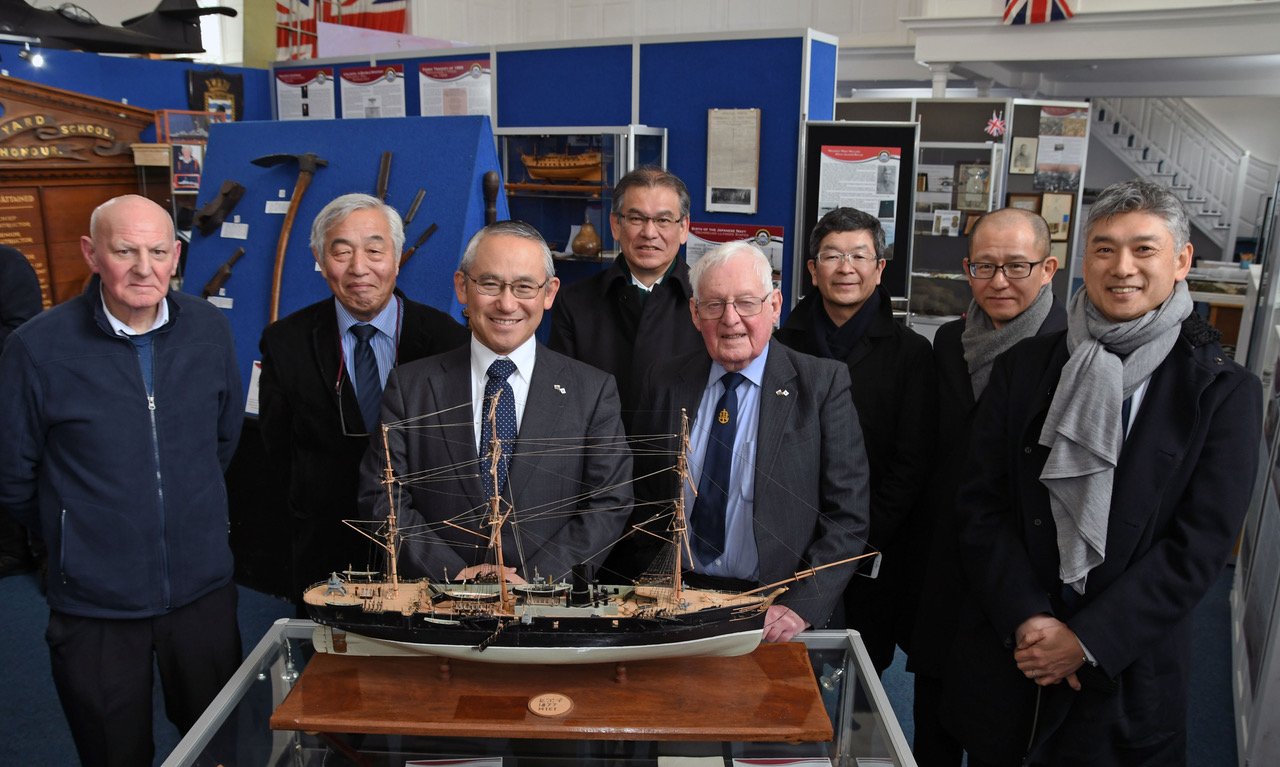 JAPANESE visitors have been given unique insights into their long naval and maritime heritage connections with Pembrokeshire.

In a visit arranged by David James, of the West Wales Maritime Heritage Society, the party braved the rain during a packed schedule which took them to Angle, Freshwater West and Pembroke Dock – special locations in Japan’s maritime story.

At Angle’s St Mary’s Churchyard they saw the recently dedicated memorial to members of the crew of the Japanese liner Hinaro Maru which was torpedoed by the German submarine UB91 in the Irish Sea on October 4, 1918 – just weeks before the end of the Great War. In several locations in Pembrokeshire the bodies of crew and passengers were washed ashore and the Angle
memorial replaces a long lost one from the 1920s. David James was instrumental in arranging for the new memorial to be placed at Angle last autumn.

At the invitation of John and Rosanna Allen-Mirehouse the group visited The Hall at Angle for coffee before travelling to a wet and windy Freshwater West beach. It was here that victims from the Hinaro Maru were washed ashore.

Final port of call was Pembroke Dock Heritage Centre were naval historian and volunteer Ted Goddard introduced the visitors to the remarkable connections with the Japanese Navy and the story of the warship Hiei – built locally forJapan and launched in 1877. A model of the Hiei – one of several made by David James – is on display at the Centre and was the focus of much interest.

Before leaving Pembroke Dock the visitors went to the former Master Shipwright’s House in the Royal Dockyard and viewed the Ginko tree which was given by the then Japanese Ambassador who attended the launching of the Hiei in 1877. The Ginko is now a huge and impressive tree in the garden.

Mr Keiji Kubota’s organisation, the Nippon Yusen Kaisha Line (one time owners of the Hirano Maru) had, together with local donors, funded the construction and erection of the Japanese War Memorial in St Mary’s Churchyard in Angle marking the last resting place of ten sailors from the Hirano Maru.
Mr Kubota is a close friend of Mr Isao Kano and so when the topic of the war grave and the Ginko tree project came up Mr Kano was very interested and wished to see the grave and the now famous Ginko tree; hence the visit was arranged.

Cuttings have been taken from the Ginko tree and are being grown on in the National Botanic Gardens of Wales, and the delegates are arranging for the cuttings, once strong enough, to be taken back to Japan to be planted in Places of Honour. One of these places is Kure, the naval base near Hiroshima in Japan.