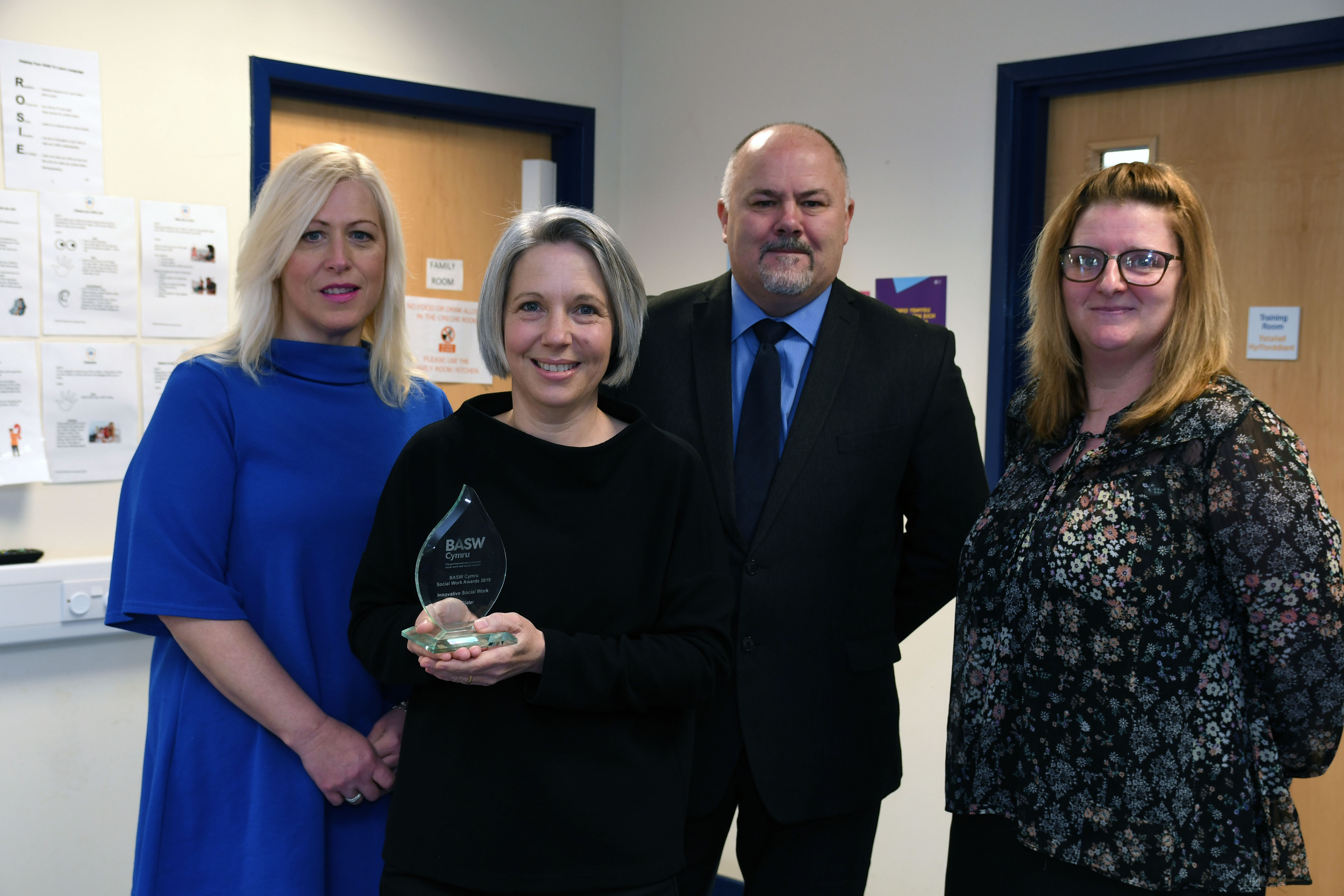 A SOCIAL worker in Pembrokeshire has received a prestigious national accolade thanks to her inspirational leadership of a new family support Team.

Amy Slater, who is based at the Flying Start centre in Pennar, won the ‘Innovative Social Work’ category in the BASW Cymru Social Work Awards 2019, held last week.

The small team – set up less than 12 months ago – is ground-breaking in its work on early intervention, says Amy’s supervisor Trish Mellor, who nominated her for the award.

“Amy has been influential in moving this service area forward, being creative and innovative in her approach,” she said. “She has a very modest, yet sensitive and ethical approach to building purposeful relationships with families and other professionals.

“Her particular skills lie in her ability to be non-oppressive with parents and carers who are vulnerable and are also very often anxious and totally overwhelmed in their role as parents.”

A range of parents supported Amy’s nomination. One said: “The support we had has been a massive help. I have been put at ease with everything from my mental health after pregnancy to dealing with a previous landlord and getting a new home. Literally couldn’t have done it without Amy over the past year.”

Another parent said: “Flying Start have helped me to make a completely new start. I couldn’t have done it without Amy. I feel brilliant.”

Originally from Abergavenny, Amy qualified as a social worker 18 years ago and worked for many years in the voluntary sector in London, including with Action for Children, Barnado’s and organisations combating child sexual exploitation.

For the last five years she has worked in Pembrokeshire County Council’s social care service based in the county’s Flying Start centres.

Her team takes a holistic approach towards early intervention, working with families on anything from mental health support and relationship problems to ensuring they have access to community resources and tackling hardship issues.

Amy said she was glad the work of preventative services had been recognised.

“Some people think it’s a fairly straightforward area of social work but it can be quite challenging,” she said. “It’s all about helping families to build up resilience so that their child can reach their potential in their early years and participate fully when they go to school.

“It’s a crucial period for children and families. This is the time we should be investing in; it sets the scene for their whole lives.”

A social care colleague said: “It is an inspiration and a joy to work alongside Amy. She is professional at all times without losing her empathic approach with families.”

Amy’s health colleagues in other areas of the Flying Start programme were also generous in their praise. “Her preventative approach to working has been invaluable in supporting Health Visitors and Community Nursery Nurses to safely manage families on their caseloads who are not quite meeting the threshold for statutory social care,” said one.

Another colleague said: “The Health team would love to see an “Amy” available to every community team in the County.”

Amy said an important feature of the Family Support Team are that they are flexible, responsive and compassionate in their delivery.

“We’re quite a new team and have had a busy year of trying to get things done but it makes my job really enjoyable working alongside people who are committed and enthusiastic and believe in what they’re doing.”

Pembrokeshire youngster to compete in global competition this summer