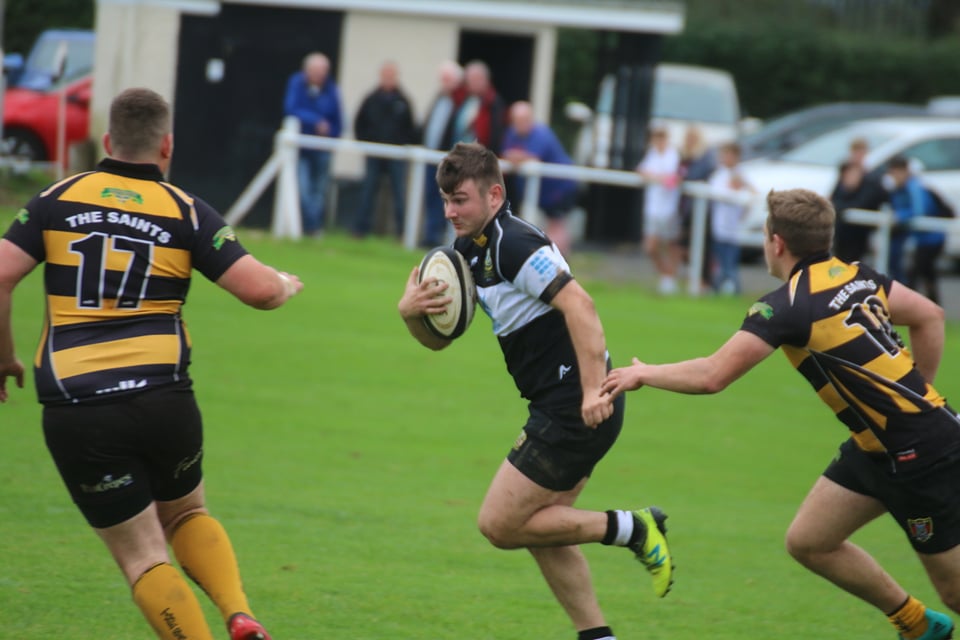 THE Quins kept up the momentum that they have built up over the last few weeks with a resounding victory over St Davids on Saturday (Oct 5).

The home side laid down their intentions with a blistering start with two tries in the first three minutes. The first came from Full Back Aaron Treweets in the opening minute, which was his first try for the Club and was converted by Outside Half Ben Hathaway.

That was followed by a second try from Jordan Asparassa straight from the restart which went unconverted.

It looked ominous for the Saints at this stage and on 15 minutes a third try was scored from Right Wing Will Nicot, which also went unconverted.

The Quins did not have to wait long for the bonus point try, and that duly arrived in the 25th minute again from Aaron Treweets after he finished off a quickly taken tap penalty on the half way line, this time Ben Hathaway added the extras. With the visitors now 24 Points adrift and looking down the Barrel, they started to threaten the Quins line, with the Quins giving away a series of penalties it looked like they could break down the Quins defence, but unfortunately for the Saints the the Quins rearguard stood firm.

The half time whistle went with the Saints threatening the Quins line but the home side kept their line intact as they turned round 24-0 to the good.

It was the Saints who started the second half on the front foot, and with just 5 minutes gone Outside Half Gavin Walsh went through at least three Quins tackles to touch down wide out. He missed the Conversion.

This seemed to wake up the Quins who were soon back on the offensive as the Tries started to flow, first Mark Van Rhyn playing out of position at No 8 forced his way over, replacement Prop Liam Smith found himself in his old position on the Right wing to finish off a fine move, before Centre Jack Price added his customary try. Ben Hathaway found his range and Converted them all, and in the process passed 50 points for the season.

The Quins then with just 15 minutes to go scored the best try of the Match when Flanker Sam James passed the ball out the back door, on the Quins 10-yard line, it was brilliantly picked up by Quins Man of the Match Flanker Jordan Palmer who linked with the threequarters before sending Liam Smith powering down the Touchline for the Quins’ eighth try.

The Quins added two more tries with Aaron Treweets finishing with a hat trick of tries and Scrum Half Gethin Bradney also scored his first try for the Quins, Ben Hathaway Converted the former to end with a haul of 14 Points.