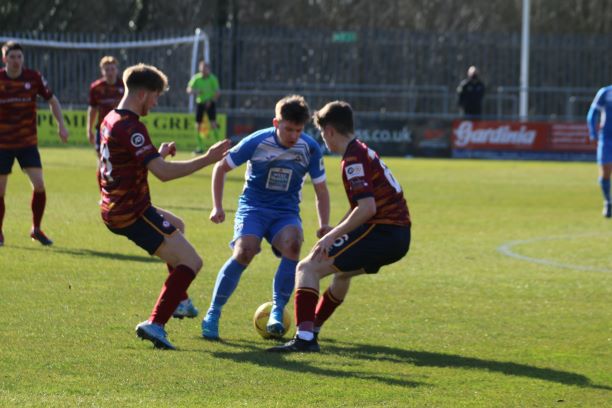 CARDIFF MET secured another win over Haverfordwest County on Tuesday night (Apr 27) as they came away from the Bridge Meadow with a 2-0 win.

Only a week had passed since the Bluebirds were thumped 6-1 by the Archers but they were keen to avoid a repeat and that showed early on as they attacked from the off.

Jack Wilson saw a shot blocked in the second minute before Daniel Summerfield fired the ball over the bar.

Midway through the first half the Archers had their first real chance of the game as Chris Baker fired towards goal but Wojciech Gajda made a comfortable save.

Elliot Evans was next to have a go for the visitors but Gajda again made the save.

On the stroke of half time, Kieran Lewis found Cameron Keetch down the left and he crossed into the box for Ben Fawcett but his effort was saved by Met keeper Alex Lang.

Fawcett had another effort soon after which went wide but the sides were still level when the half time whistle went.

Early in the second half, the Met won the ball back and it was sent into the box for Evans but he volleyed wide of the goal.

The home side were then forced to make an early change as Kieran Lewis went off injured to be replaced by Marcus Griffiths.

Cameron Keetch then sent a strong shot towards goal but Lang did well to tip it wide for a corner. From the resulting set piece, the Bluebirds almost went ahead but Summerfield headed just over.

Evans then saw another shot saved but on the hour mark he finally had his goal. The hosts were caught on the break and Evans fired in under Gajda to make it 1-0 to the visitors.

Tom Price then sent an effort wide for the Met before they doubled their lead on 69 minutes. A corner into the box was unfortunately headed into his own net by Keetch.

Jack Wilson fired a volley wide late on but that was as good as it got for the hosts as the Met celebrated another win to keep their recent good run of form going.

Excitement builds as cricket returns to Fishguard and Goodwick