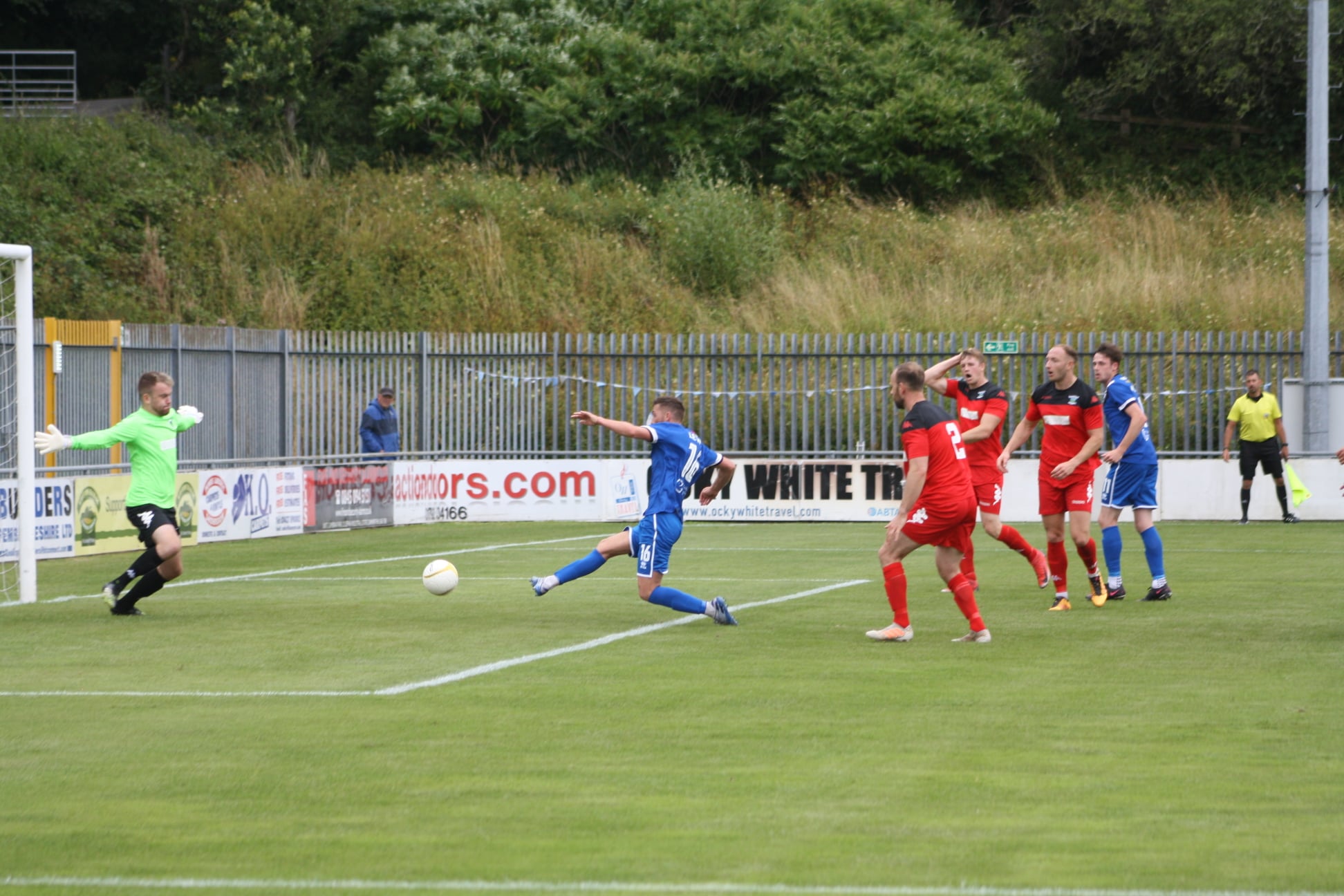 HAVERFORDWEST COUNTY booked their place in round three of the Nathaniel MG Cup on Saturday (Aug 7) as they beat Goytre United 3-0 at the Bridge Meadow.

The game was the Bluebirds’ first competitive game of the season, while opponents Goytre held a 100% record from their opening three JD Cymru South games.

With social distancing rules being relaxed there was a good crowd at the Bridge Meadow but they saw a first half that lacked any real chances.

The goals eventually came late on as the Bluebirds were finally rewarded for their dominance.

New signing and captain Dylan Rees was in the starting line up for the home side as was Henry Jones who also signed in the summer.

The first chance of the game fell the way of the hosts as Corey Shephard sent a strong shot just over the bar.

Kieran Lewis then found Wilson but he couldn’t get the ball out of his feet and Goytre were able to clear.

Daniel Birch then saw a shot blocked for the visitors and the ball fell to Louis Gerrard but his low drive was comfortably gathered by County keeper Wojciech Gajda.

Birch then crossed into the box for Liam Griffiths whose header looped just over the bar with Gajda scrambling to try and reach it.

Dylan Rees and Henry Jones linked up well for the Bluebirds but, as had been the case on a couple of occasions in the first half, the final ball was lacking and Goytre were able to get the ball away.

On the stroke of half time Jones sent a long range effort wide of the posts and the score remained 0-0 when the referee brought the first half to a close.

Both sides knew that the first goal would prove crucial and it was the Bluebirds who were inches away from getting it, ten minutes in to the second half.

Kieran Lewis saw his low shot come back off the post and Goytre breathed a sigh of relief.

With twenty minutes to go the visitors enjoyed a good spell of possession. However, Callum Bateman may have rued his decision to shoot from a free kick in the middle of the half when he could have floated it into the box for a team mate.

Liam Griffiths then saw his effort go over but it wouldn’t have counted had it gone as the flag had gone up for offside.

Louis Gerrard was then played in but Gajda, who had had little to do, came out to clear the ball away.

With fifteen minutes to go the Bluebirds finally got the breakthrough as Shephard’s cross from the right fell kindly for Kieran Lewis and he had time to compose himself before lifting the ball into the net.

Gerrard then had another chance for the visitors as they looked for a late equaliser but his weak shot was easily saved by Gajda.

With the clock ticking towards 90 minutes, the Bluebirds broke and Wilson held the ball up well before squaring for sub Mason Jones-Thomas. He then sent a cross into the box and after Wilson left it Henry Jones was on hand to curl the ball back across goal and into the net.

In injury time, Goytre were reduced to ten men as Callum Bateman was shown a second yellow for late tackle.

There was still time for Jazz Richards to try his luck but when his shot was saved the ball fell to Shephard who fired in to the bottom corner for a deserved goal.

That was the last kick of the game and the Bluebirds will now look forward to the draw for the third round.

The Bluebirds begin their JD Cymru Premier campaign next Saturday (Aug 14) as they travel to Caernarfon Town.