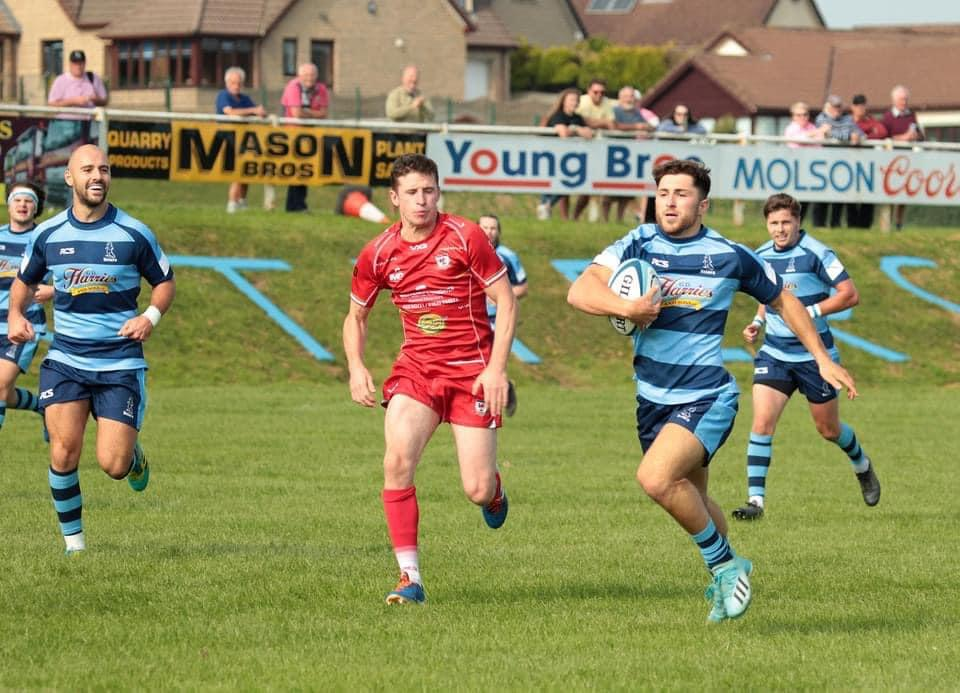 ON Saturday, September 4, in the Championship Cup Narberth RFC once again fielded a young development side against visiting Ystalyfera.

The game kicked off on a beautiful sunny afternoon in front of a large crowd who had come to see the first home match for about eighteen months.

Narberth got off to a flying start and after a mere five minutes youngster George MacDonald playing at scrum half picked the ball up from a ruck, darted round the blindside and chipped ahead. He gathered his own kick and dived over in the corner for the first try. Nick Gale converted from the touchline (7 – 0).

Shortly thereafter the Otters had a lineout close to the visitors try line and set up a rolling maul. When this was brought down close to the line Narberth No.8 Guto Davies, playing in only his third match for the home team, picked the ball up and barged his way over the try line. Gale again converted (14 – 0).

Ten minutes later and the Otters were on the scoreboard once again. From an attack by the visitors on the ten metre line young Otters flanker, Josh Hamer, turned the ball over and the ball was quickly fed to fly half Ashley Sutton who broke through the visitors defence and then passed to supporting winger, Will Hughes, who scored in the left hand corner. Another superb kick by Gale saw the try yet again converted (21 – 0).

Despite the scoreline Ystalyfera had been playing some good rugby and after an attack by the Otters broke down the visitors left wing got hold of the ball and kicked downfield. The ball bounced kindly for him and he was able to gather his kick and dive over in the corner. The conversion attempt failed (21 – 5).

Despite this set back Narberth continued to attack and within five minutes had scored again. An initial break by Prop Bradley Davies saw the ball spun across the Narberth backs with precision passing from centres Joe Hutchings and Jake Jenkins and it ended up with wing Dafydd Pritchard who dived over to score in the right hand corner. Once again Gale converted with a superb conversion (28 – 5).

The Otters attacking was relentless and after switching play across the field on at least four occasions the ball was swiftly fed by MacDonald to Ashley Sutton who found himself in space with only the visitors tight head Prop in front of him. He easily glided passed him and scored under the posts. Needless to say, the try was converted by Gale (35 – 5). The whistle then blew for half time.

Ystalyfera started the second half with renewed vigour and put the Otters under significant pressure but the home team’s defence had held firm during the first half and they were determined to try and keep the visitors out. Eventually however after a series of drives towards the line by the Ystalyfera forwards the ball was fed out to the visitor’s centre who sliced through the Otters defence and scored under the posts. The try was converted (35 – 12).

Ystalyfera were now gaining more possession and were looking to spread the ball wide at every opportunity. Another kick downfield by the visitor’s left wing saw the Otters rushing back to defend their line. From the ensuing ruck the ball was fed to fly half Sutton who made a half break before slipping the ball inside to Guto Davies.

He passed to centre Joe Hutchings who made further ground before offloading to Nick Gale who finally got the ball away to supporting flanker Josh Hamer who scored in the corner. Another excellent kick from Gale saw the try converted (42 – 12).

At this stage the floodgates started to open but in fairness to Ystalyfera they never stopped trying and the Otters had to work hard for the points. After a series of forward drives by hooker Rhodri Owens and Props Bradley Davies and Ifan James a gap opened up for replacement scrum half Declan Smith who ran in under the posts and Gale duly converted (49 – 12).

Almost from the kick off a lovely offload from young winger Ryan Scourfield saw Gale score in the corner and add the conversion (56 – 12).

It wasn’t long before the Otters were once again encamped on the visitors line and after several players were tackled just short of the line No.8 Guto Davies once again forced his way over the try line and Gale duly converted (63 – 12).

Ystalyfera refused to give up and with five minutes to go scored a consolation try by their winger which he duly converted (63 – 19). With the last move of the match Ashley Sutton side stepped his way through a number of now tired defenders to score under the posts. Gale completed his afternoon by kicking ten out of ten conversions (70 – 19).

After the match Team Manager Chris James said “With so many seasoned 1st team players unavailable today it was good to see several young players put their hands up for future selection. The 1st team coaches have been working very hard over the summer to get these youngsters up to Championship standard and whilst there will be some far more competitive teams to play during the season this augurs well for the Club’s future”.

Head Coach Sean Gale said that he had been impressed by several performances and all the coaches were very pleased with the hard work and dedication to training that many of these young players had put in pre-season.

Next week’s team selection would be causing them some headaches but that was just what they wanted.

Next week the Otters are again home in a Championship Cup match against Trebanos.

Mariners and Seagulls return with wins