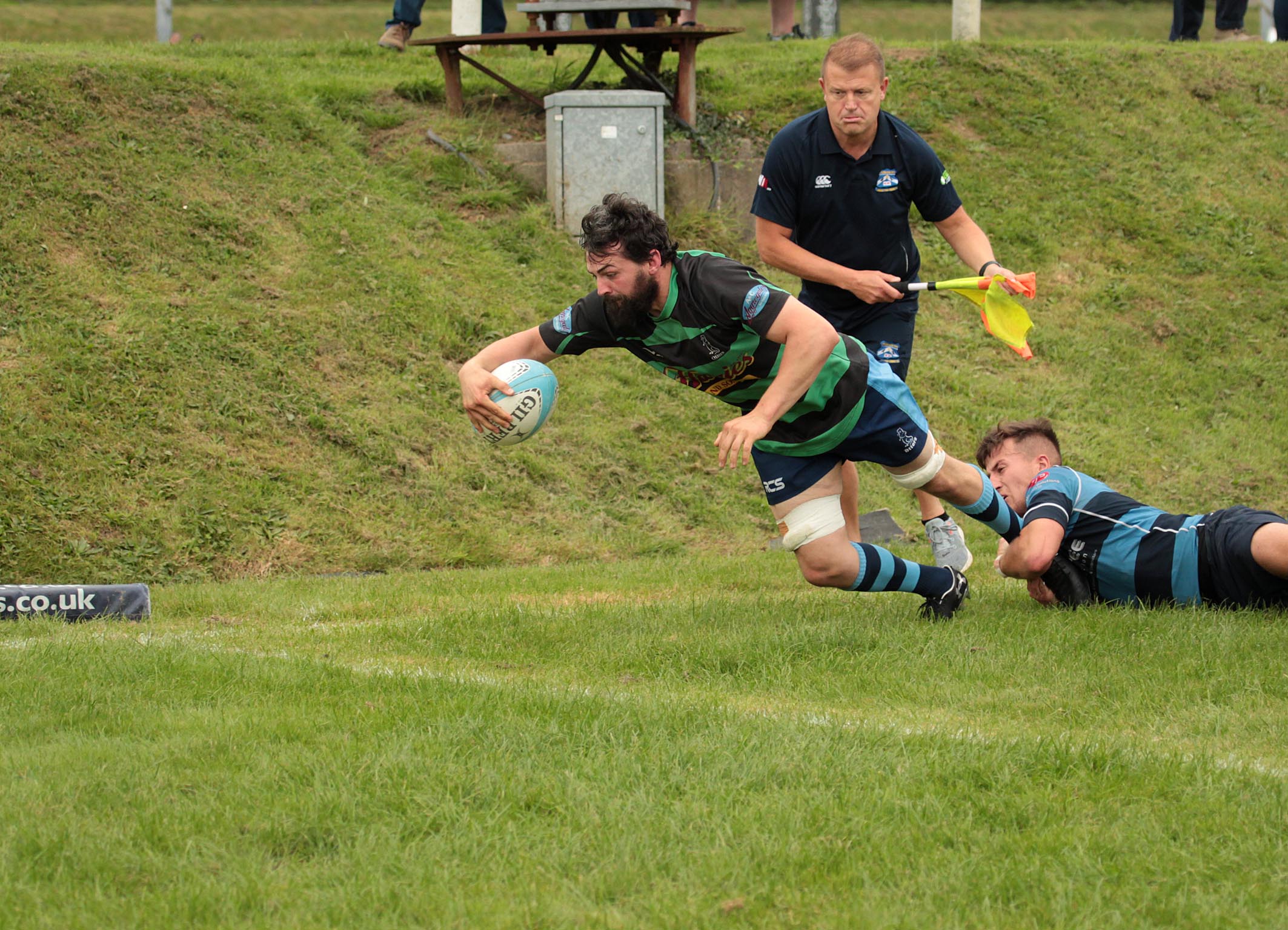 After only five minutes Narberth were first on the score board. When a penalty was awarded to the home side for the visitors being offside at a ruck winger Nick Gale kicked the ball close to Trebanos’ 22 metre line. From the lineout the Otters set up a rolling maul and drove towards the visitors try line. Trebanos conceded a penalty and Gale again kicked for the corner. From the lineout the Otters again drove towards the visitors try line and Prop Tom Kaijaks powered over to score. Nick Gale kicked the conversion (7 -0).

Shortly afterwards a missed tackle in midfield saw Trebanos fly half Tom Dew break through and kick ahead. Fortunately, home fly half Ashley Sutton got to the ball first and put in a relieving kick downfield to avert a near score for the visitors.

Ten minutes later Trebanos again infringed at a breakdown and Narberth were awarded a penalty, but Gale narrowly missed the kick from about 40 metres out.

Narberth continued to attack with driving runs up field by their lively forwards but couldn’t break the visitors’ solid defence.

Then after quick ball from a lineout the ball spread across the Narberth back division and centre Jake Jenkins made a lovely outside break. He attempted to pass to his supporting winger Dafydd Pritchard but unfortunately the Trebanos winger got his hands on the ball first to avert a certain try.

However, the ball was carried over the Trebanos line resulting in a Narberth five metre scrum. The Otters continued to threaten the visitors’ line for a good ten minutes but just couldn’t manage to break down the Trebanos defence.

Then, from yet another attacking ruck the ball was spun wide to flanker Guto Davies who went over in the corner only for the referee to adjudge that there had been a forward pass. Narberth continued to have most of the possession and from a lineout on the Trebanos 22 metre line Narberth scrum half Rhys Lane made a decisive break. When tackled, the ball was quickly recycled, and hooker Rhodri Owens dashed down the blindside of the ensuing ruck and gave a lovely pass to winger Pritchard who scored in the corner. The conversion attempt was unsuccessful (12–0).

Within five minutes Trebanos were back on the attack and won a lineout on the Otters 22 metre line. They attempted to set up a rolling maul but when this failed, they moved the ball out and a fine angled run saw the Trebanos centre break through the Narberth defence and score near to the posts. Fly half Dew converted making the score (12–7).

This lifted the Trebanos team, and they spent some time in possession attacking the Otters line but excellent defence by the Narberth team kept them from scoring.

Eventually, however, the Otters were penalised for offside at a ruck and Dew was again successful with the kick (12–10). Then a further infringement at a ruck by the Trebanos hooker resulted in Narberth being awarded a penalty on the visitors ten metre line and this was kicked successfully by winger Gale to make the score 15–10.

Almost from the restart at a ruck on the Otters 22 metre line the Trebanos Second Row deliberately elbowed a Narberth forward with a direct blow to the head. The referee had no hesitation in issuing a red card reducing the visitors to 14 men for the rest of the game.

As often happens, this galvanised the Trebanos team and with some scintillating runs by Dew they were once again stretching the Narberth defence. Eventually Trebanos were awarded a penalty in front of the posts which Dew again kicked to bring the score at half time to 15–13.

Shortly after the restart Narberth managed to increase their lead once again. From a scrum the ball was moved wide to winger Gale who raced upfield only to be tackled close to the visitors try line. A series of scrums followed where the Otters held the ascendancy and eventually the ball was switched to the blind side of a ruck where captain and No.6 Richie Rees scored in the corner. The conversion attempt was unsuccessful (20–13).

Almost from the kick-off Narberth scored again. A relieving kick upfield saw the Trebanos full back drop the ball and it fell into the hands of Rees. He gave a quick pass to No.8 Steff Phillips who charged upfield and then passed to supporting flanker Guto Davies who was tackled just short of the visitors try line. From the resulting ruck the ball was quickly passed out wide and winger Dafydd Pritchard beat his opposite number with a great change of pace to score in the corner. The try went unconverted (25–13).

Shortly afterwards Trebanos kicked a penalty for a Narberth infringement at a breakdown to narrow the score to 25–16.

Narberth once again got back on the attack and forward drives by Tom Kaijaks and Richie Rees took the Otters to within five metres of the Trebanos try line where they were awarded a scrum. At this point fly half Ashley Sutton was replaced by Jonathan Rogers.

The Narberth pack drove Trebanos back towards their line and Scrum Half Rhys Lane picked up the ball and looked to have grounded the ball over the line, but the referee was unsighted and ruled that he had been held up over the line.

Narberth then made their final change replacing Lane with George MacDonald. With very little time left Narberth were again pressing very close to the Trebanos try line and were awarded a scrum. No.8 Steff Phillips picked the ball up and went to the blindside and passed to the supporting MacDonald who unfortunately was adjudged to have stepped into touch before crossing the try line.

Trebanos continued to throw everything into attack to try and gain a losing bonus point, but the Otters defence held firm, and the game came to a close with the score remaining at 25–16.

In the Clubhouse after the game Match Sponsor Graham Searle awarded the Man of the Match to captain Richard Rees.

All Blacks see off Quins with three late tries