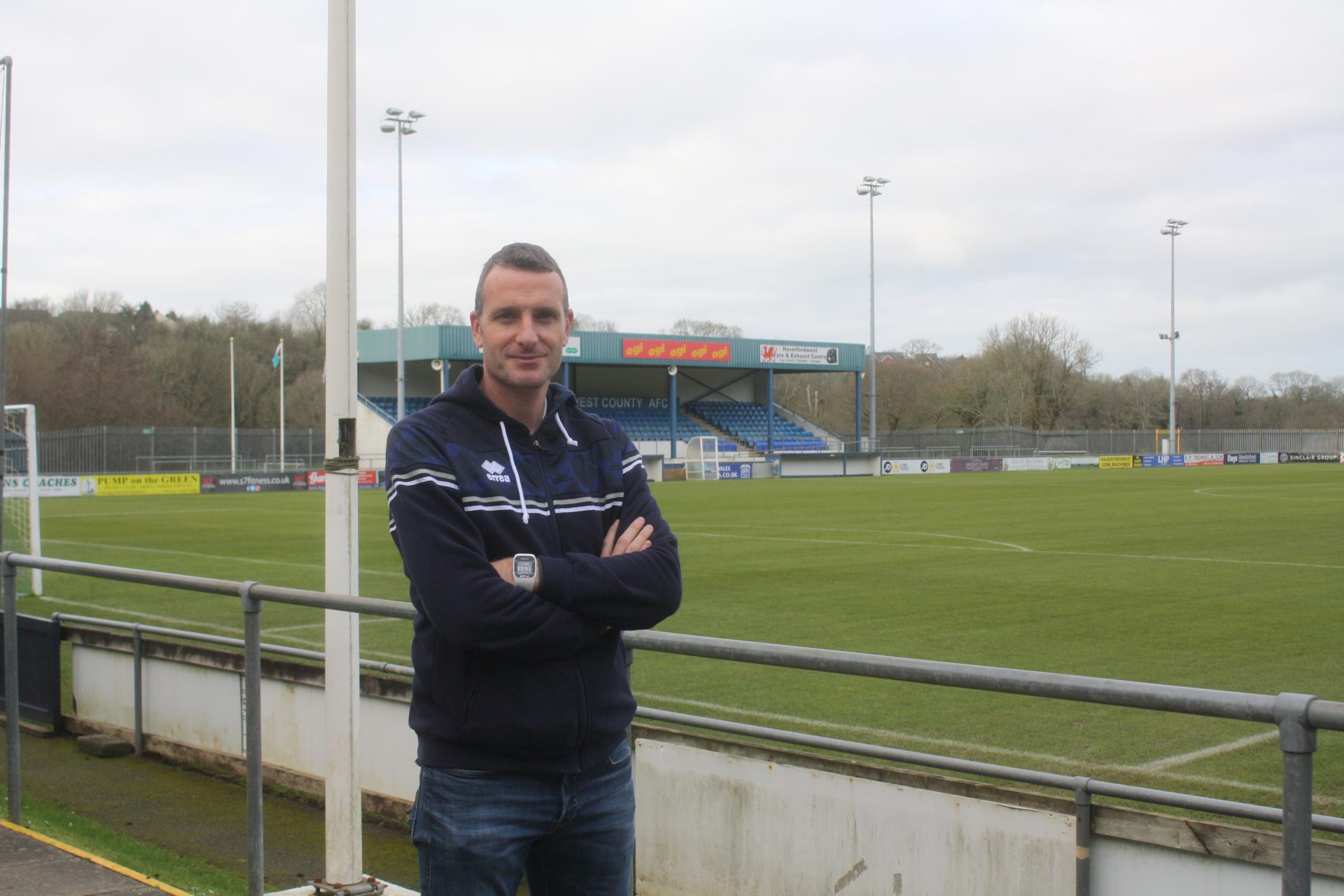 HAVERFORDWEST COUNTY return to action this weekend as they take on Newtown in the JD Cymru Premier.

Football in Wales had been suspended following the announcement of Welsh Government restrictions but they have now been relaxed and football can once again get underway.

The Bluebirds face a tough test against the side that sits in second place in the table but new manager Nicky Hayen will not be in charge for the game against Newtown as his work permit has not come through.

He will be watching on though as Gary ‘Waggy’ Richards takes temporary charge and Nicky told the Herald that he is fully confident that his assistants can get a good result.

When the sides last met in October the Bluebirds came out on top with a 1-0 win thanks to a goal from Alhagi Touray Sisay.

Speaking ahead of the game on Saturday Nicky told us about his plans for the team, his ambitions and how he wants to work closely with grassroots teams in Pembrokeshire and with the community.

Nicky may not be able to take charge just yet but he has already been observing training sessions and been gathering information on the other teams in the JD Cymru Premier.

Asked what attracted him to join Haverfordwest County, Nicky said: “First of all, the ambition of the chairman, this is the most important thing so he had a project for three years to reach European football. I like projects and when you’re digging into stuff from the club, you can see that is a good combination.

“I saw some games of the team and I saw two different teams, one team who play with confidence and played the football that I like, building out from the back and trying to find the football solutions on the ground, and I saw a team that didn’t have confidence that was clearing every ball and wasn’t winning contests so I saw that they have the skills to do what I have in my mind.

“So this combination, the ambition of the chairman, the team that is playing at this moment, I think we have to be capable of performing better than the position in the league at this moment.”

The ultimate aim for the club is to reach European football but Nicky isn’t thinking about that just yet.

“The ambition is to make it to the first six positions, it will be almost impossible for this season so we want to avoid relegation and then have a good pre-season and we’ll see what happens next season but finishing in the top six is a nice goal.

“To reach this you have to win your first game and then your second game, I just take one game at a time, starting with the game at Newtown, we’ll try to win and then I hope I can be on the bench for the Penybont game.

“The short term project is staying in the league, but the project is much bigger and it includes building bridges with the grassroots teams with the Pembrokeshire League, with the community so what we want to do is to create an environment over here that is more than football.

“The academy is something that is really important, we want to improve our players and everyone can see that we give chances to players to develop in the squad and this is what we are already doing now.

“The one thing I don’t want to do is change the club culture. We have to keep the culture but we have to add some value and create an identity that is clear for the next fifty years.”

Nicky is settling in well in Haverfordwest and is looking forward to seeing more of the area but says he is focussed on the football for now.

Haverfordwest’s game with Newtown takes place on Saturday, January 22, kick off at 2:30pm.

Neyland hold on for win as Aber miss late penalty