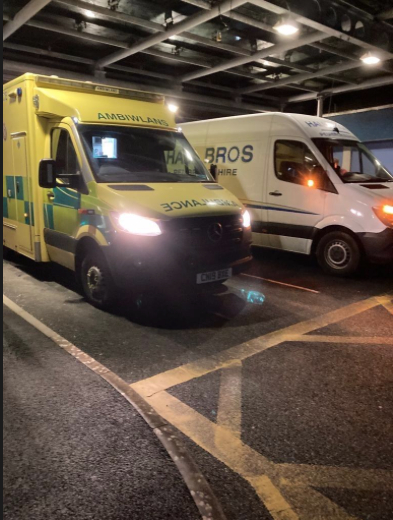 A 65-year-old Goodwick grandfather’s ten-hour wait for an ambulance forced family members to improvise in order to get him to Withybush Hospital.

Martin Hall, who made a miraculous recovery from a brain stem stroke he had a decade ago, suffered a fall at his home near Goodwick at around 8am on Tuesday, March 8, and fractured his femur.

A 999 call for an Ambulance was logged at 8.17am and the family were told then that there were delays and, because of that, patients were being prioritised by severity of injury.

Because of these delays, Mr. Hall remained on his bathroom floor in agony for a further 10 hours despite two more 999 calls being made by family members.

His son, Rory, said: “At 6pm we received a call from the Welsh Ambulance Service apologising for the delay. They still couldn’t advise us of an arrival time,”.

The ten-hour wait meant that Rory’s sister, Dr. Katy Kumar, herself a senior lead A&E doctor in Morriston, had enough time to drive to Pembrokeshire from Swansea to be with her father.

With the situation getting desperate, members of the family decided to get Mr. Hall to hospital on their own and cancelled the Ambulance.

Rory said: ““We cancelled the ambulance….we would take Dad to Withybush ourselves.”

The family were able to borrow a stretcher from Fishguard & Goodwick Rugby Club which they used to put Mr. Hall into the back of a sprinter van owned by their company.

Rory said: “The A&E department in Withybush was stunned when we arrived at 7pm,”

“They did a double take when they saw my father lying on a mattress and stretcher in the back of our works van with my sister and family friend for safety.”

Mr. Hall was eventually admitted, receiving an X-ray at around 1.30 am the next morning which confirmed the fracture to his femur.

It wasn’t until about 5.30am that Mr. Hall was finally transferred to a ward. Just over 21 hours after the fall took place.

The Welsh Ambulance Service’s director of operations, Sonia Thompson, apologised for Mr. Hall’s ordeal, describing the events as an ‘upsetting experience’ before going on to say that “As an ambulance service, we will always respond first to those whose life is in immediate danger,”.

Rory said: “I cannot emphasize how disappointed I am in the NHS,”