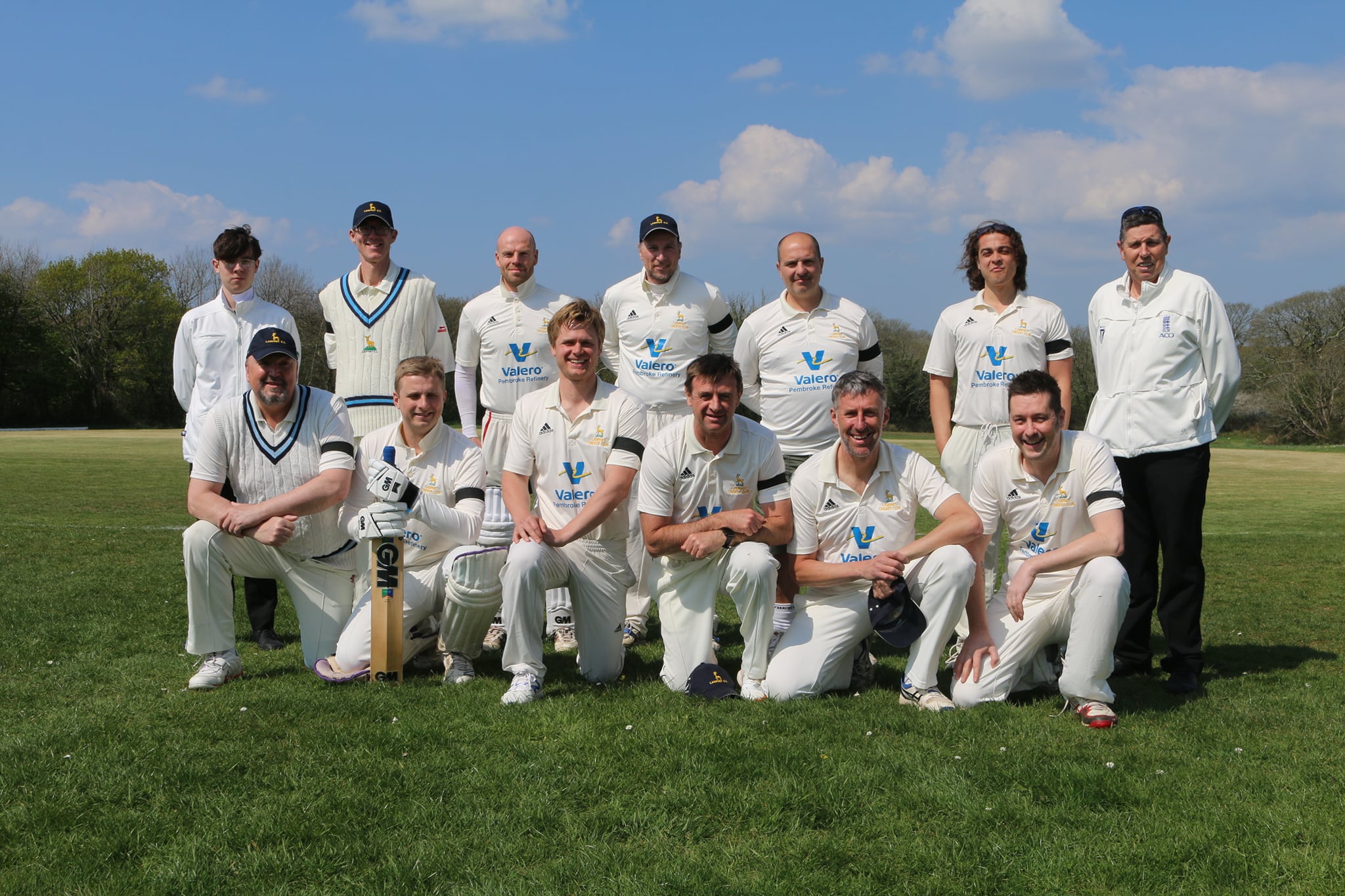 LAMPHEY and Llanrhian were amongst the winners on Sunday (Apr 24) as the Division 2 cricket season got underway.

Lamphey scored 245-6 in their game against Johnston with Andrew Tait top scoring on 93. Nick Shelmerdine also batted well as he finished not out on 83.

Peter McGilloway added 27 for Lamphey while the pick of the bowlers for Johnston were Mark Hicks with 2-22 and Keegan Codd with 2-55.

In reply, Codd scored 19 and there were scores of 33 from Leigh Walters, 39 from Josh Hicks and 30 from Gary James but it wasn’t enough for the home side.

Hywel Gibbs was the pick of the bowlers for Lamphey with 4-18 while McGilloway (2-26) and David Dredge (3-44) also claimed wickets to bowl Johnston out for 174.

The game was umpired by father and son duo Jonathan and Harry Twigg. (Both are pictured either side of the winning Lamphey team).

Llanrhian won on their return to Division 2 as they beat Pembroke by eight wickets.

Wickets for Daf Williams (2-9) and Anthonty Couzens (2-12) helped Llanrhian bowl their opponents out for just 92.

Andrew Hay top scored with 22 while Steve Durston was not out on 20 but it wasn’t enough to stop Llanrhian’s bowlers.

Iwan Jones then finished unbeaten on 34 and Jack Jones finished not out on 40 as Llanrhian eased home.

Burton made 302-5 in their game with Llechryd on Sunday as they went on to seal a 95-run victory.

Morgan Scale finished not out on 56 as the visitors posted an impressive total.

Daf Davies made a score of 25 in reply for Llechryd with other scores of 29 from James Betterley and 32 from Ollie Roberts.

Jack Davies finished not out on 54 but it wasn’t enough as Llechryd finished short on 207-5.

Hook made a winning start to Division 2 on Sunday as they beat Carew seconds by eight wickets.

Carew scored 181-4 in their innings with Gareth Lewis finishing unbeaten on 88. He had good support from Jacob Knox who reached 30 and Hayden Shapcott who scored 26.

Hook batted well in reply as Aled Phelps scored 41 and Owen Phelps top scored with 60. Jacob Lay then finished not out on 52 to see his side over the line.

Herbrandston picked up the win on Sunday as Whitland finished just 13 runs short of their target.

Herbie posted 218-8 in their innings with Jack Nicholas top scoring on 66 while Harry Nicholas added 47. Charlie Malloy added 43 for the visitors as Whitland were set 219 to win.

Jonathan Thomas was the pick of the bowlers for Whitland with 4-53.

Ed John then scored 45 and Scott Newton scored 82 but Whitland were unable to reach their target.