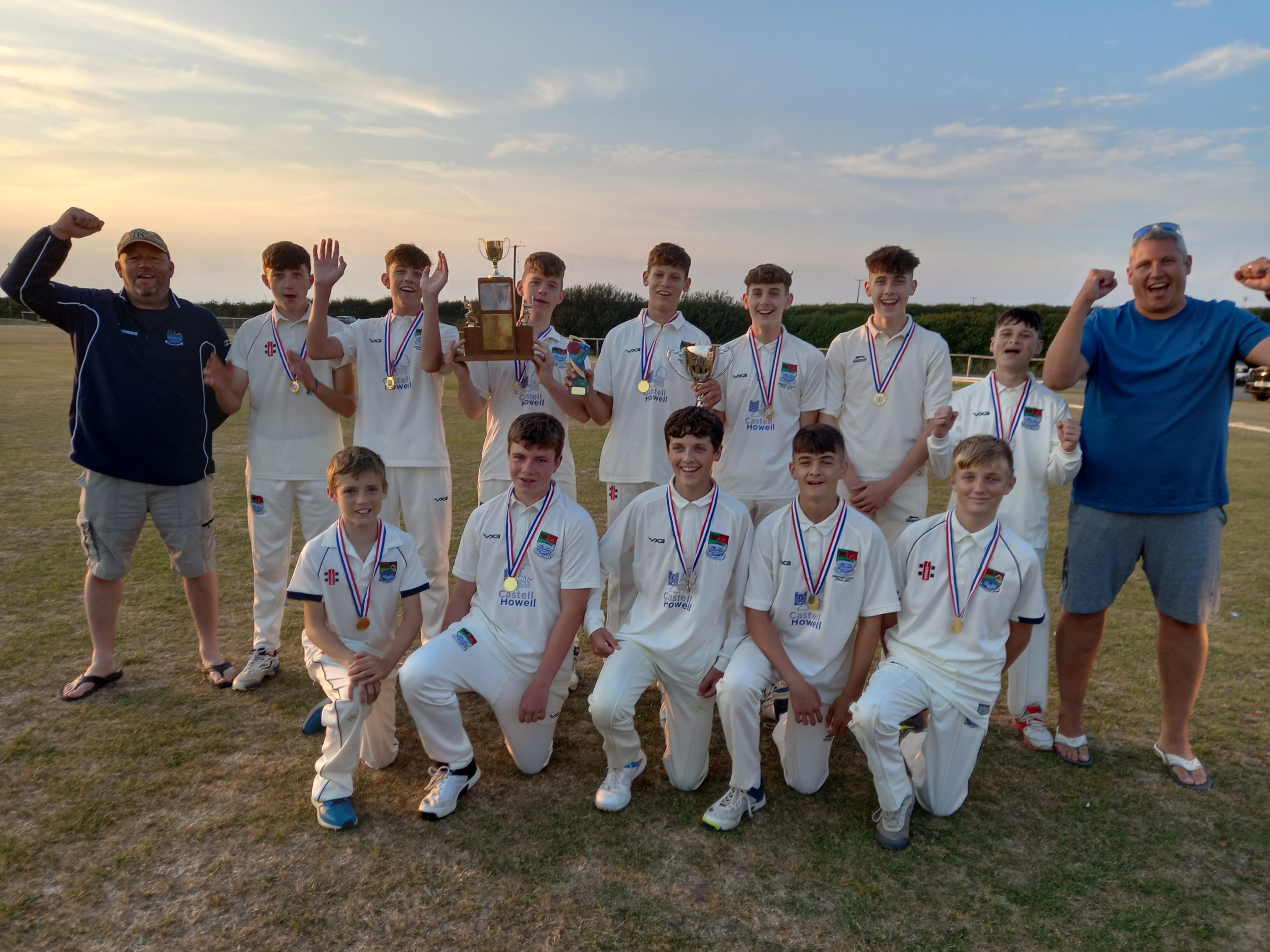 THIS years final was between the top two sides, from the North Zones with Kilgetty beating Whitland in the group stage and then Hook in the Semi final whilst Whitland beat Neyland in the other Semi final.

Captain of Kilgetty Jamie Keating won the toss against his counterpart Charlie Bujega of Whitland and decided to bowl first. The Square and Outfield was in fine condition with the hard work of Kevin Bowen & Chris Bradshaw.

Both teams had very strong bowling outfits and in both innings the ball dominated the bat. The Whitland opening bats Daf James (17) and Rhys Jones (12) progressed the score to 32 without loss off 7 overs when Noah Williams struck quickly followed by a wicket for Rhys Eyon With the Score at 42-2 off 12 it was anyone’s game. It was the turn of the Whitland Captain to play a decisive as it turned out innings of 26 before being run out by a direct hit by Rhys Eynon.

Opinion was very much divided at the break although Whitland knew they needed a good start and that’s exactly what they got. Coach Mark Lee was in his third final in successive years, having lost the previous two, and his team talk worked wonders and there was some inspired bowling by the whole team who never let the Kilgetty batters get into their stride.

Wickets fell at regular intervals with opening bowlers Cian Rees and Charlie Bujega being to hot to handle on the night removing the danger men of Rhys Eynon, Kiaran Sine and Logan Hall (6).

It was only Harry Morgan whose has been in fine form recently put up any resistance to the Whitland onslaught with lovely cover and straight drives before becoming Bujega’s second victim. Rees finished with 3-9 and Bujega 2-17 with both taking a catch each.

Late resistance by by Jamie Keating (6) and Taylor Lewis (8 ) advanced the score but with Cai Lewis 2 -11. Freddy Davies 2-5 and Daf James 1-8 aided by three catches by Alex Passmore together with 11 extras saw the Kilgetty innings close on 52-10. This left Whitland as deserved winners on the night.

In the presentation after the match, Martin Jones (Junior Organiser) congratulated both sides on reaching the Final and their Coaches Trefor Badham and Mark Lee also deserve great praise for their hard work. He also thanked St Ishmaels for hosting the final, including Kevin Bowen and Chris Bradshaw for their work on the ground. Wendy Bradshaw, Pat Williams and the Ladies section for providing the food for the player and spectators.

Last and by no means least Martin thanked Sponsors Colin John Llewelyn Davies & Co Chartered Accountants for his continued and valuable support of Junior Cricket in the County. It was also great to see Richard Merriman County Chairman and Trefor Evans County President in attendance.

The Winning Trophy now in its 48th year, donated by the family of the late Stan Richards and John Bowen looked a picture. It was great to see Georgina Morgan, daughter of John whose grandson

Ollie Rees presented the winning trophy to Whiland County Chairman Richard presented the runners up cup donated by Martin & Yvonne Jones together with the medals to Kilgetty. This year we also had the Inaugural Player of the Match Cup in memory of the Late Bill Roberts another St Ishmaels stalwart presented and donated by his son Evan with the permanent award sponsored by Moira & John Hawkins. This was presented to the Whitland Captain Charlie Bujega for his all round contribution to the game.