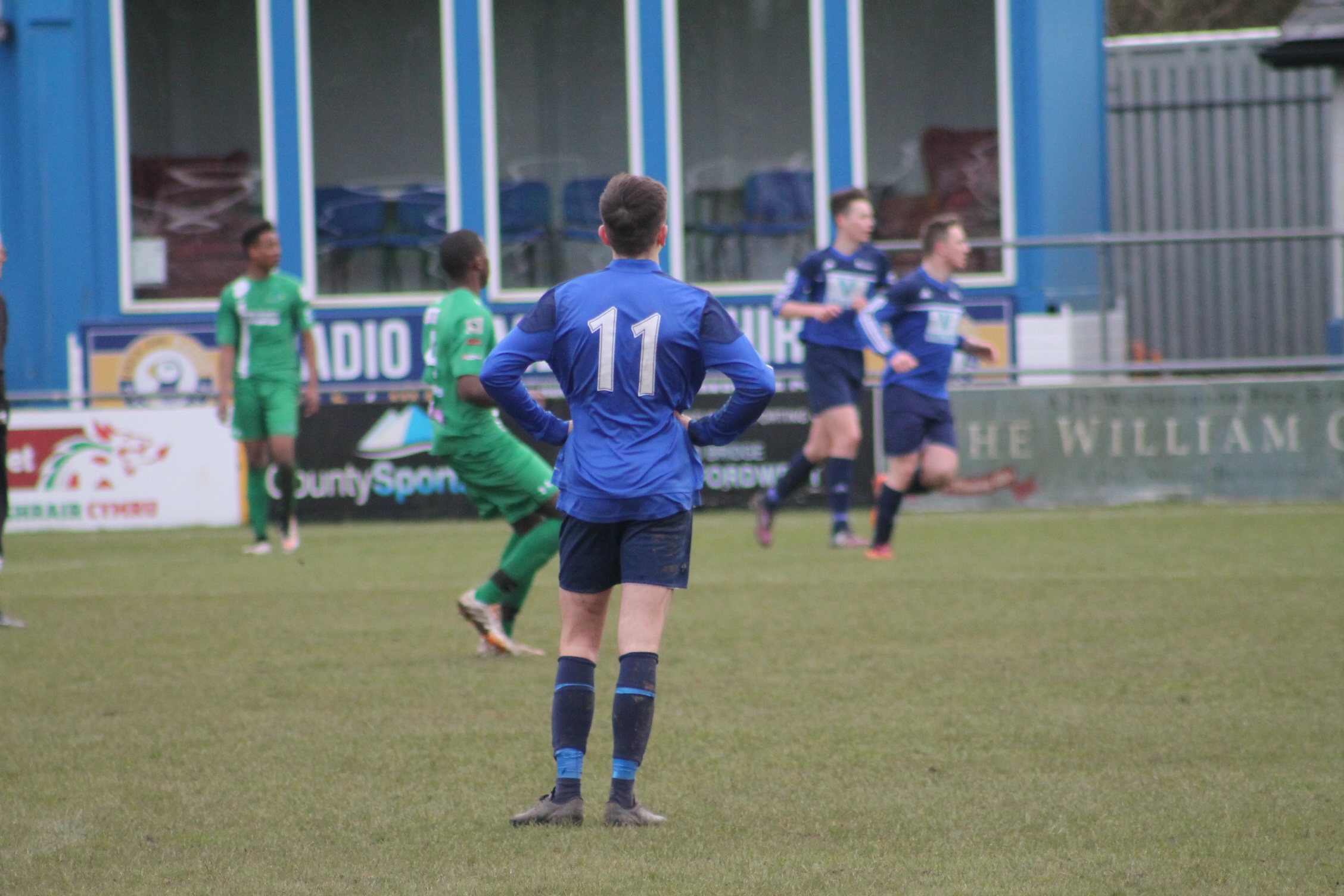 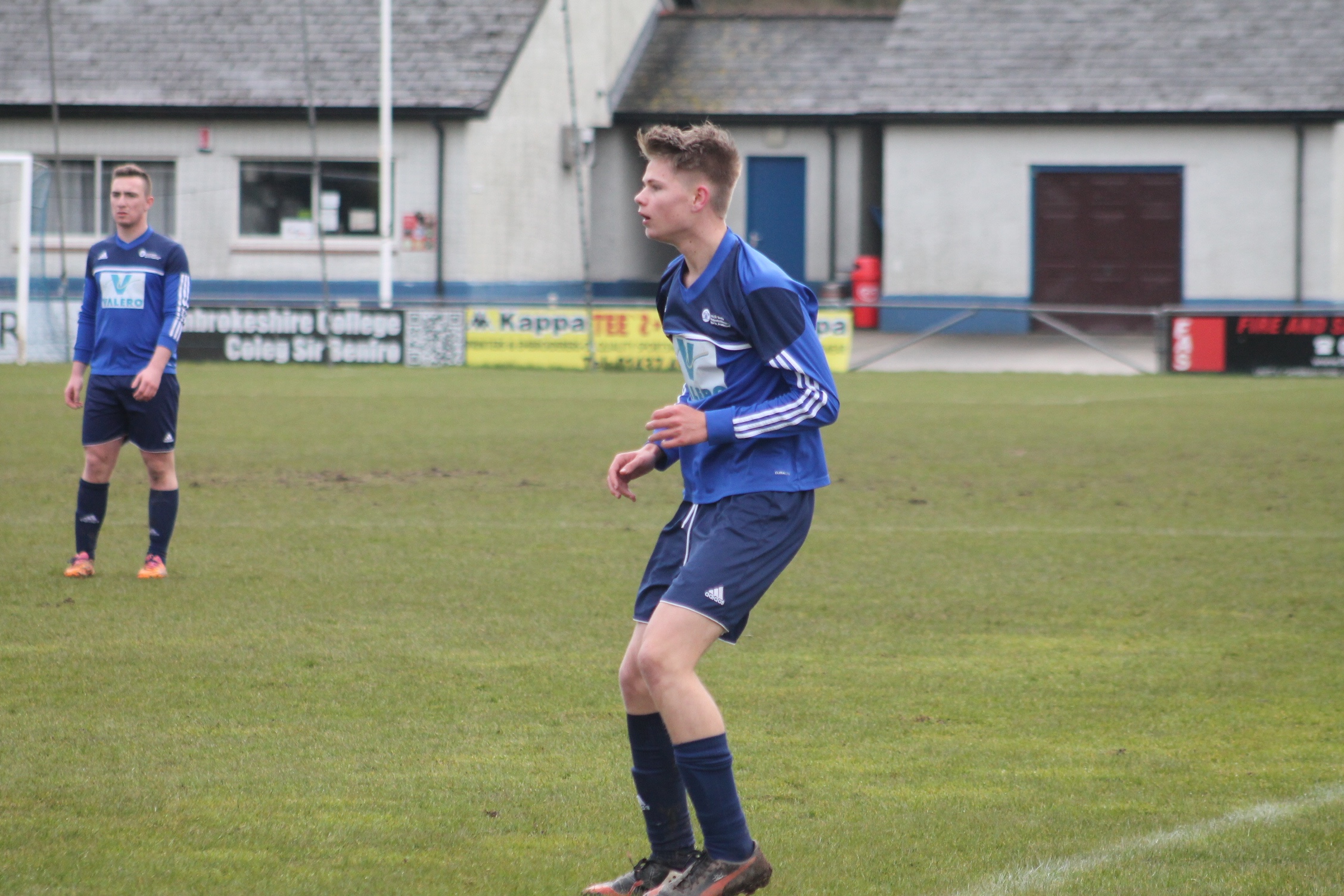 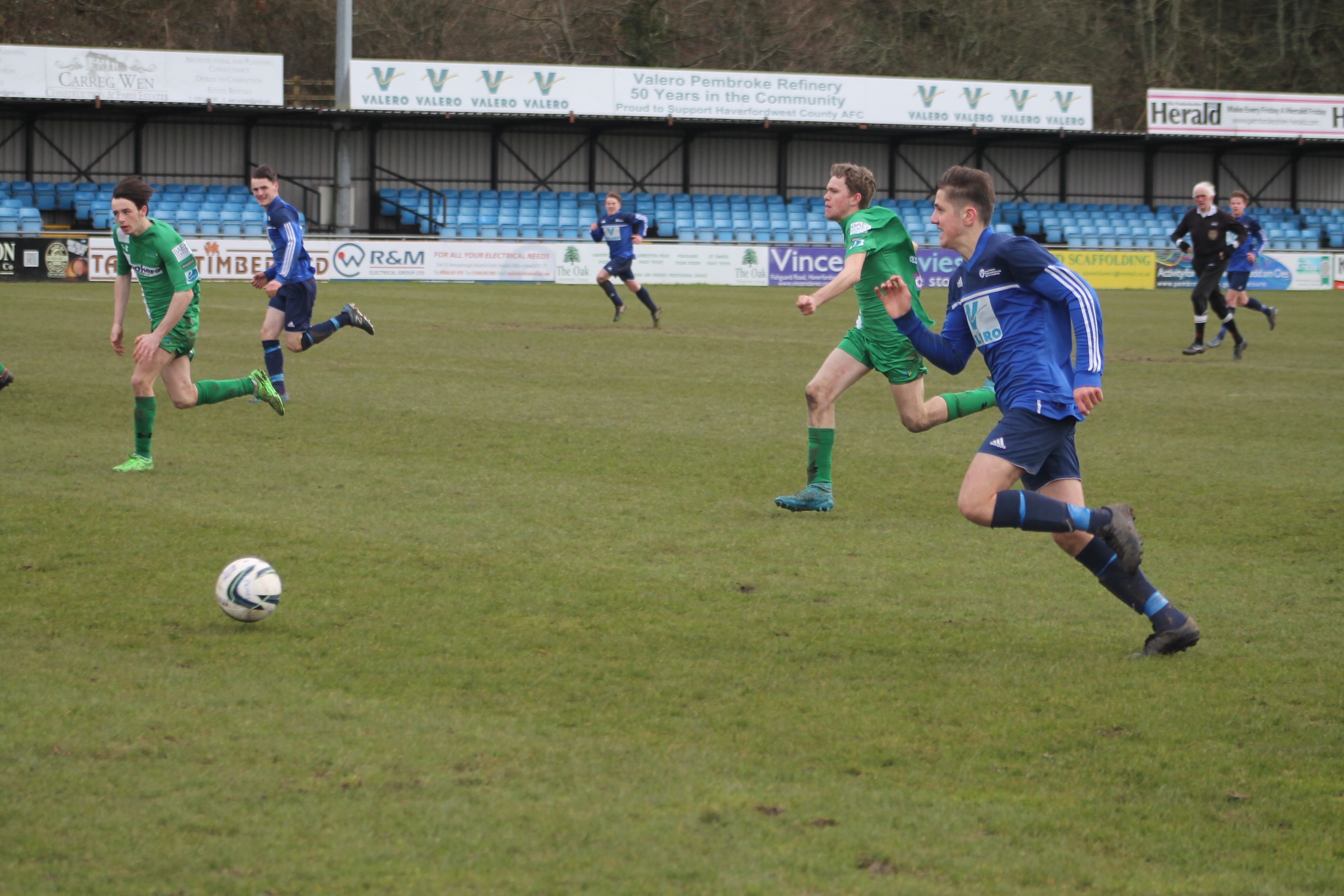 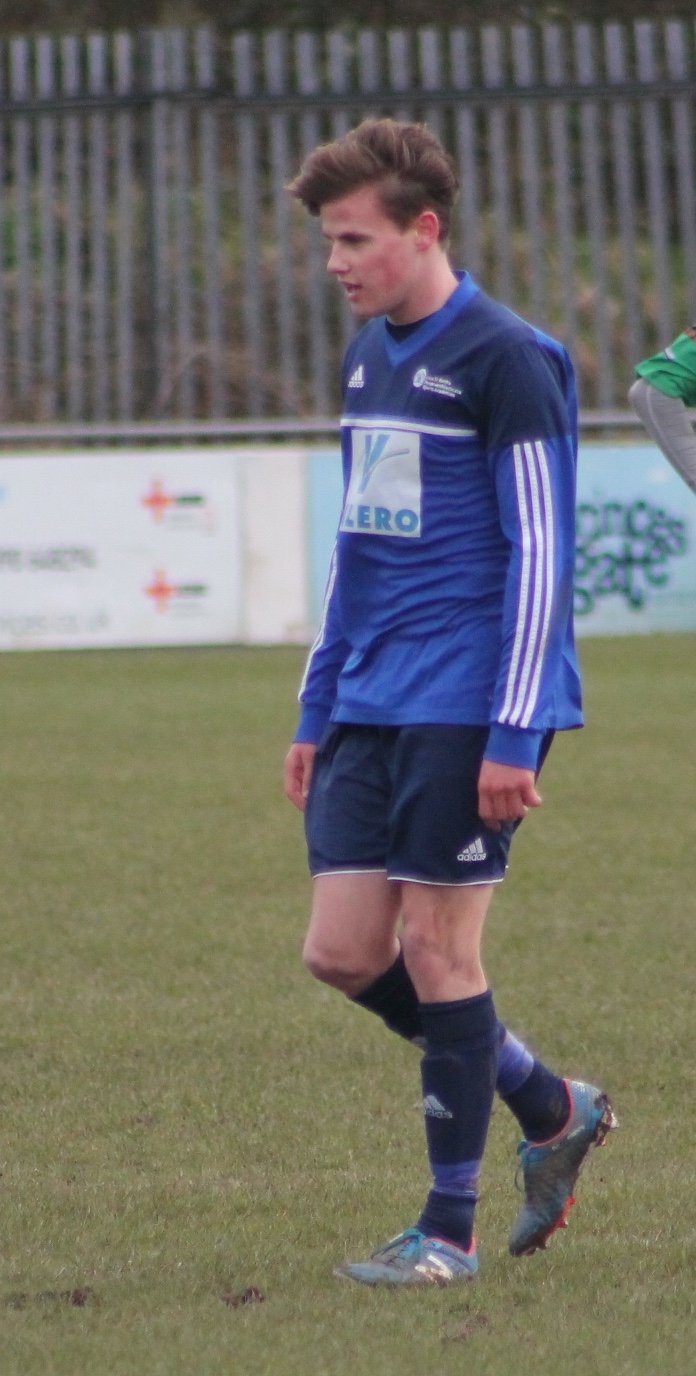 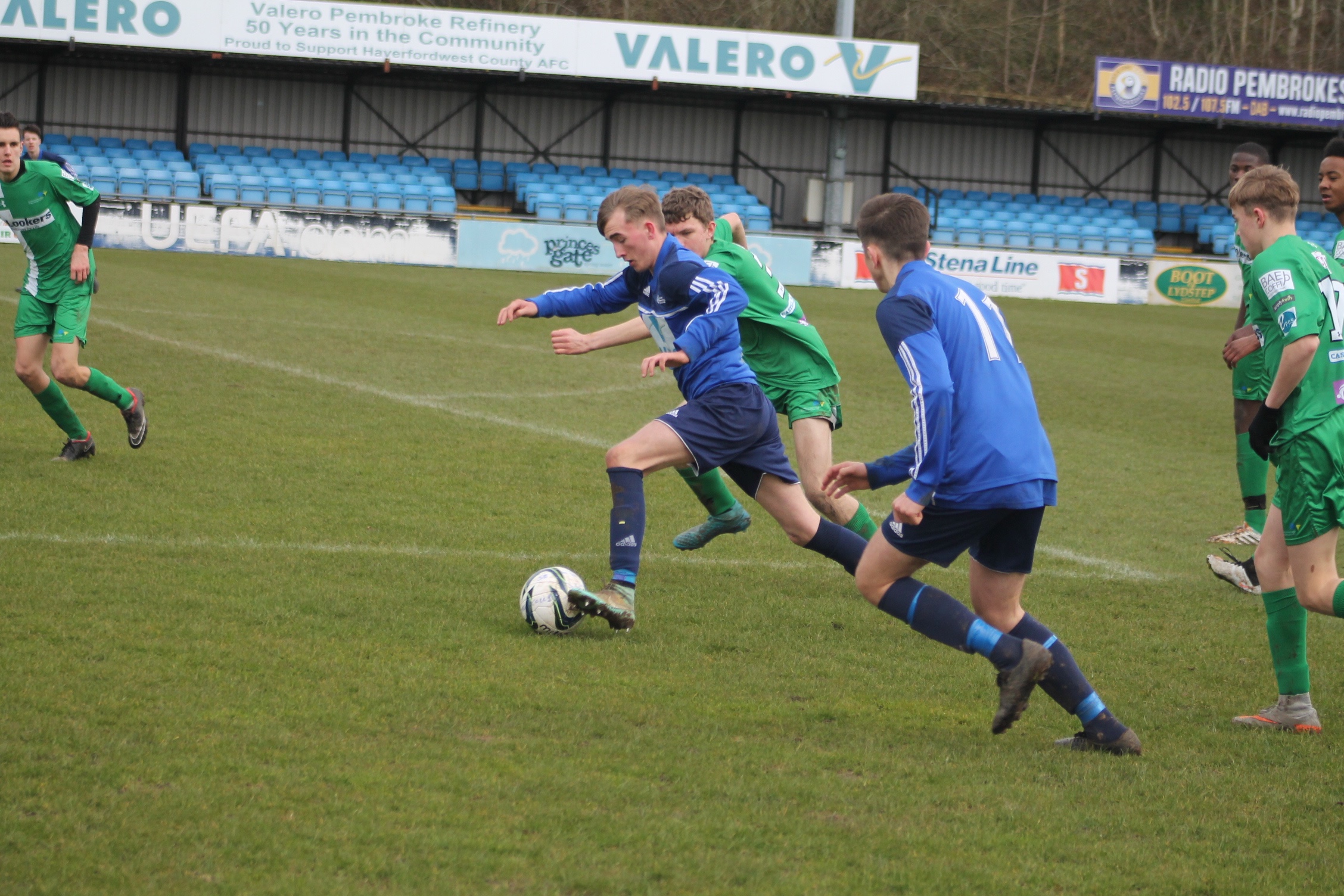 On a freezing, wet and windy day at the Bridge Meadow the Valero sponsored Pembrokeshire College welcomed their counterparts from Cardiff and Vale College in what promised to be a testing encounter.

The hosts got off to the perfect start when after just 90 seconds a free kick was awarded just inside the left hand touchline. Winger Fraser Finley delivered a teasing ball into the heart of the penalty area and when the Vale defence was unable to clear the danger, Lewis Watts capitalised to stab home from close range and give his side the lead.

With 15 minutes gone Pembrokeshire suffered a blow when Jordan Kilby went off injured after a crunching tackle in midfield left the midfield man nursing an ankle injury.

This allowed the Vale to move into the ascendency for a 5 minute spell as the hosts adapted to the change, but the solid Pembrokeshire backline repelled the danger the visiting attack threw at them, and when the Vale did manage to create a shooting opportunity they could only find the arms of Ben Aldred in the Pembrokeshire goal, playing out of his usual position of centre midfield.

They were made to pay for their inability to turn chances into goals when the hosts doubled their lead after 25 minutes when right sided midfield player Jake ‘Leon’ Luby was given time to pick out a cross into the box, when it went just over its intended target, the home defence failed to react to the bouncing ball, and it made it’s way through to Louis Thompson who had all the time in the world to control the ball before slotting it under Patrick Lane in the Vale goal.

With the soft surface cutting up a frustrated Vale side started to put in some zealous challenges, and when one of these challenges strayed over the boundary of acceptable, there was a flare up between the two sides, which was soon extinguished by referee Colin Newberry.

The visitors were now looking ragged and just after the half hour mark the college’s Haverfordwest Welsh Premier League star Spencer Williams was afforded an eternity of space 25 yards out, and the visitors were taught that you simply cannot allow a player of his quality that sort of time. They sat back and watched as he unleashed a ferocious shot into the far corner of the net. Despite the pureness of the strike, it is not one that Lane will want to see again however, as the Vale stopper put his arms up nonchalantly as if to suggest the shot was heading wide, only to be left red faced when it nestled inside the post.

With forages into the Pembrokeshire half now something of a rarity it was something of a surprise when the visitors got themselves back into the game, albeit thanks to a rather soft penalty. As Mikey George attacked through the right hand channel, he went down under an innocuous challenge by George Taylor and the appeals from his teammates were enough to see a penalty awarded. Luke Davison stepped up to confidently slot past Aldred to send the Vale in at the break with a lifeline.

After the break the Vale came out with renewed intent following their lift before the interval, and they were unfortunate not to score when Khalid Yousef saw his shot brilliantly tipped over by Aldred with just a minute played.

With the Vale attacking there was plenty of pace on the counter, with left-winger Finlay in particular enjoying a lot of space to attack, and through his outlet the college always looked a threat.

The game turned into a midfield battle with the hosts shading the possession, and with the visitors now out of ideas, the game was put beyond them when a hopeful ball through by Thompson caused confusion in the Vale defence. Failing to give a clear shout, the onrushing Lane took out his own centre back, allowing Luby to run through unopposed and tap the ball into the empty net.

With the game now won there was still time for some late drama as substitute Donovan Griffin got onto the end of a deep cross from first team debutant Ben John, but the diminutive wide man saw his header come back of the underside of the bar before being hooked clear.

The drama didn’t stop there, as with the game all but over the impressive Yousif in the Vale midfield struck the goal of the game as he glided forward from deep before curling a beautiful effort into the top corner of the goal past Aldred from fully 25-yards.

Next Wednesday (Mar 9) the College take on top of the table Coleg y Cymoedd (Nantgarw) at the Bridge Meadow, 1.30pm kick off.

Tasker and co miss out after crash

Jobs for the boys from the WRU