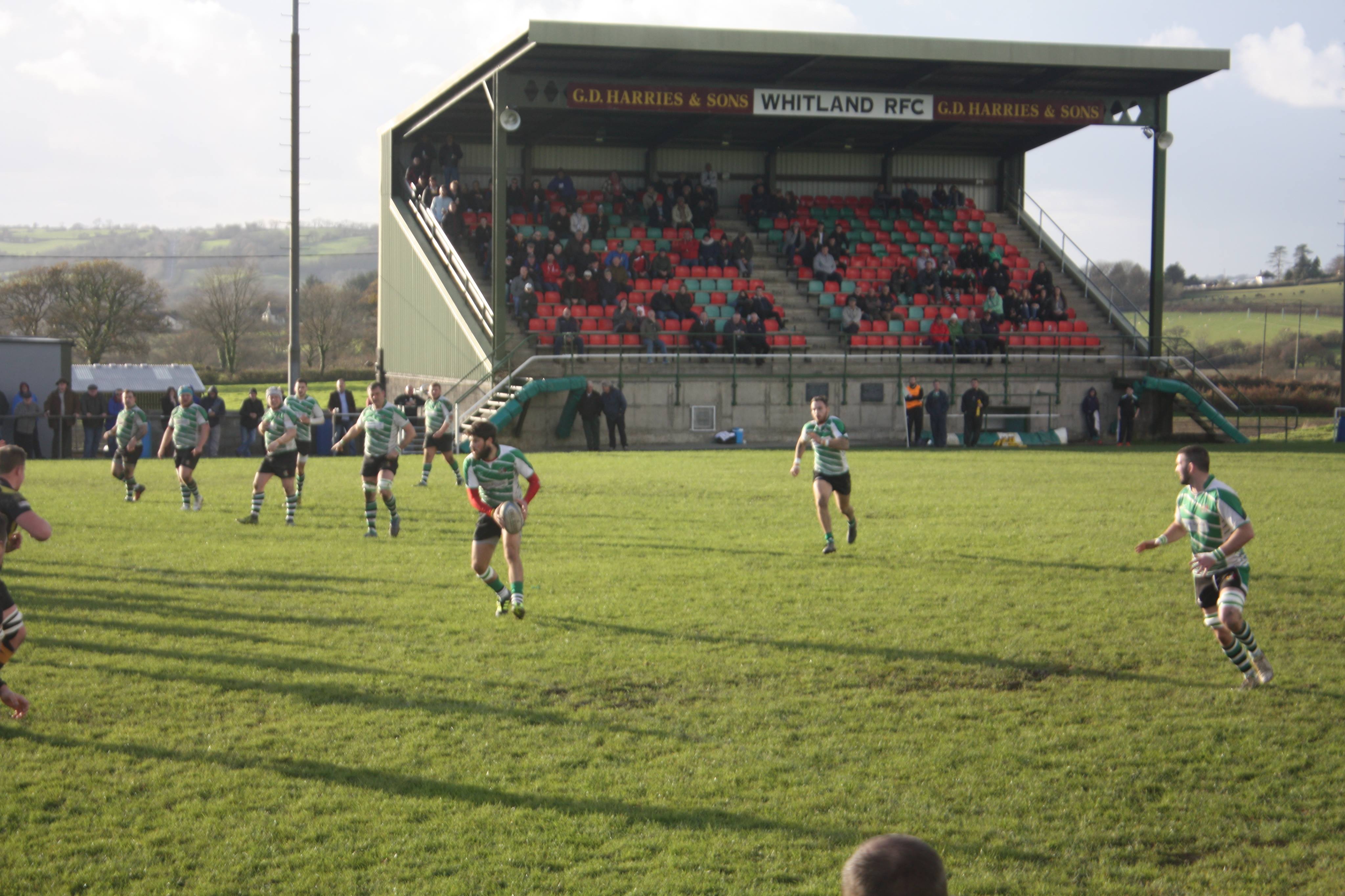 “A HAPPY camp is a winning camp” according to Coach Gareth Bennett and the GD Harries sponsored ‘Green Machine’ of Whitland were in buoyant mood on Saturday (Nov 4) after they kept their unbeaten start to the season in tact after against previously unbeaten visitors Pontarddulais.

The Borders are committed to play a style of rugby where they are willing to play the situation which falls before them, where a precarious 9-7 lead at half time in the face of a swirling wind could have led to them wilting in the face of a side intent on leaving Parc Llwyn Ty Gwyn with something to show for their efforts.

They scored the only try of the game two minutes before the break when winger Gethin Williams crossed wide out for fellow winger Paul Geary to add a majestic conversion to put the ‘Ambers’ 7-6 ahead, but had to settle for a losing bonus point as the home sides outside half Nico Setaro kicked them to victory with five penalties.

Setaro took a while to settle into the flow of the game as he was guilty of some poor tactical kicking as his side were second best in the early exchanges in all aspects.

The scrum found itself disrupted from the start, as skipper Marc Thomas lost one against the head and throughout the first half they continually failed to secure line out ball which would have allowed them a platform from which to play on the front foot. Setaro missed an effort from just beyond the 22m line after six minutes before ‘The Bont’ lost influential Loose Head prop Andrew Williams two minutes later as he found himself exposed to some rough treatment on the floor and the ebb of the game swung in Whitland’s favour.

Hooker Thomas was tenacious in his tackling and driving play supported by the ‘boiler house’ veterans Raff Williams and 47 year old Dai Ebsworth.

Ebsworth experience of playing for three decades, including at Narberth was evident both on and off the ball as he became a go to man in the line out which led to a second penalty failed penalty attempt for Setaro after winger Liam Price had run over 25m with the ball in hand.

Fellow winger Sean Coles also combined in a sweeping 50m run with Price and the home pressure finally paid dividends midway through the half when Setaro’s penalty was successful after Pontyates referee Justin Thomas marched forward for ten metres after some dissent.

The visitors were penalised eight times in the first half, mainly for not releasing the player in the tackle as they slowed the game down with many on field injury assessments.

The tactics galvanised Thomas, Ebsworth, Number 8 Jack Mason and flanker Benji Kirk to put in the hard yards for their side and a second Setaro penalty after 32 minutes extended the lead.  Williams try came about thanks to second row Jordan Daniels and flanker Dean Courtney setting a platform for the winger to cross.

In time added on at the end of the first half a counter attack from their own half saw Setaro’s angled kick fielded by full back Aled Stone, a product of the Clubs junior and youth set up.  Instead of putting the ball out of play to end the half he tried to run from within touching distance of his own posts to be caught by the marauding home back row and the resultant penalty from wide out for not releasing allowed Setaro to lead his side from the field with a 9-7 cushion.

Centre Josh Thomas entered the fray after half time for Whitland as ball player Johnnie Thomas moved to the wing to replace Sean Coles, victim of a dead leg.

The second half game management from the home side saw them stifle any effort by Pontardullais to get ahead with some excellent handling and miss moves shipped the ball wide to winger Thomas and Price ensuring the game was played deep in the visitors territory.

Setaro and full back Scott Newton are composite ball handlers and kickers from hand, alongside Thomas and Price as they dictated both the tempo and tactical play which saw them combine and travel at times over sixty metres with ball in hand.

Coach Dan Mason was complimentary of this play as ‘the players are encouraged to express their ability at all times’.

He added: “There may have been a hangover from our last game at Tumble alongside nerves due to the ‘magnitude of the game’ at the start of the afternoon but we are all confident in our own and our team mates skills.  Bennett, added ‘there is no better feeling for a front five forward to get up from the battle on the floor to see the ball 40m downfield and it keeps a spring in our step and a smile on our faces.”

Replacement Thomas also added a new dimension to the play after the break by taking and carrying the ball to the first defender with fellow centre Alun Davies enjoying the freedom created to ensure Setaro and the back three could perform. Flanker Ryan Michael was instrumental in leading a high defence line alongside scrum half Adam Davies who edged out his more experienced counterpart Adrian Killa or the visitors as the game wore on, which restricted the ability for Stone et al to run back from deep, resulting into the kicks into the hands of Newton, Setaro and Thomas.

Setaro landed two more penalties as the graft of his forwards put their side 15-7 ahead with ten minutes remaining although it could have been different had Geary not slipped when attempting a straight forward penalty attempt a minute later; he made amends with five minutes left after work from Daniels drew Michael offside as his side felt the loss just when his side most needed him most of Number 8 Jacob Miles, an attacking dynamo alongside his scrum half Killa all afternoon.

A vociferous visiting contingent in the stands became frustrated as the play couldn’t transfer to give their idols an opportunity to win the game where a Club spokesman at the end of the game praised ‘Whitland’s second half performance, which ended our unbeaten league start, although the losing bonus point may prove crucial as the season draws to its climax.”

The final word on an absorbing Whitland Ladies sponsored top of table encounter was left to Bennett. “As coaches it’s a case of osmosis as these players just want to take everything we are giving them onto the pitch.  We have no expectations beyond our next game and we are able to use players out of position when the need arises; our philosophy of trying to play rugby beyond our outside centre will remain.”

Next week Pontarddulais entertain St Clears whilst the unbeaten Green Machine travel to Mumbles to take on a side which were unable to field a team last weekend.