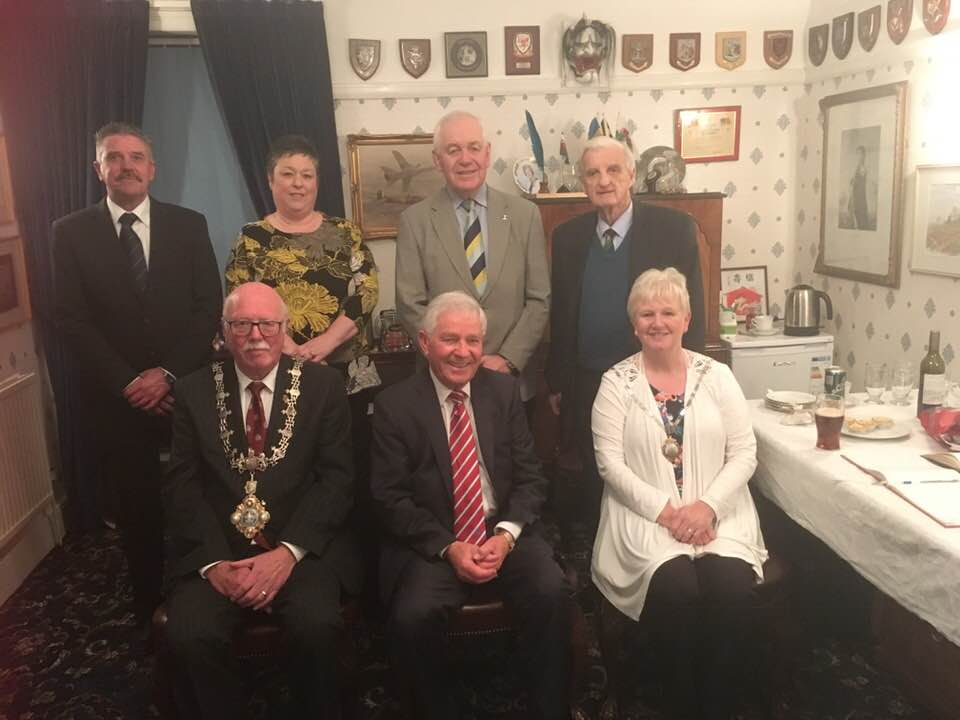 HAVERFORDWEST Cricket Club celebrated the 40th Anniversary of their Clubhouse on the Racecourse on Friday (Dec 8) when over 90 people attended an event which also raised funds for Prostate Cancer.

Haverfordwest, who are the oldest cricket club in Wales and will be celebrating their bi centenary in 2024 welcomed Glamorgan CCC President Alan Jones as guest speaker, who was accompanied by the well-respected St Helens Balconier John Williams .

The Clubhouse was officially opened in 1977 by former Glamorgan captain Wilfred Wooller, although the Clubs own President Jim Williams pulled the first pint in an unofficial opening for the Town Mayor, former Club Captain and player Don Twigg MBE.

The Clubhouse extension was officially opened by Jones, who at that time in 1982 was the Glamorgan opening batsmen and his return was greeted warmly, alongside fellow guests, Mayor Alan Buckfield and his wife Gill and Pembroke County Cricket Club Chairman Paul Webb and his wife Janice.

The Mayor had welcomed guests to his Parlour for an official visit prior to them arriving for the excellent fare provided by Pete and Kay, after which Jones regaled those present with memories of his cricketing days with Glamorgan and answered numerous questions which came from the floor, hosted by MC Bill Carne.

Amongst the throng of past and present players memories were shared of Harrison Allen triumphs alongside historic days which included the opening of the current ground in 1981 when a Mayor XI, led Peter Lewis played against the Clubs First XI. This followed a game between the then Youth XI, captained by Alan Sexton taking on a ‘past players side’ in the September sunshine, captained by Alfie Webb the then Chairman of Preseli District Council.

Another game which stood out in the memories of those present was one when a Sam Whitbred Lord Taveners XI, captained by Tom Cartwright and including Jones alongside other icons of the game in 1986 when the Town were led by wicketkeeper/batsman Phil Jones.

Haverfordwest also had a strong history of touring, taking in places around Gloucestershire, Hereford and South Wales but also travelled to play Perth, the oldest cricket club in Scotland in 1979.

The host club, Haverford based at Meirion, Pennsylvania royally welcomed the tourists with dinners, official welcomes and fun days but the cricketers ensured they reserved enough energy to record three victories.

He was also revered as a catalyst in attracting youngsters to the Club for coaching and the Bajan, who went on to coach the West Indian side after successfully leading his native Barbados in the Currie Cup and ‘Springs’ remains in close contact with many stalwarts from ‘yester-year’.

Haverfordwest currently have four senior teams playing in the Pembrokeshire League, age group teams from their Under 19’s down to Under 9s in their ‘Blue Lightning’ Youth section and are also the current Pembrokeshire Indoor campions and will be playing Gorseinon Cricket club shortly to see who would represent Wales in the National Indoor Championships at Edgbaston.

The evening gave an opportunity for Clubs award winners to receive their trophies but the main winner was Prostrate Cancer, who received a substantial donation from the evening.

Roger Thomas, the Cricket secretary who co-ordinated the evening stated: “It’s been a super night and the laughter from young and old was great to listen to. We have donated to the Professional Players Benevolent Fund as Alan wouldn’t accept anything from us tonight and of course we are proud to contribute to the Pembrokeshire branch of Prostate Cancer.

“We couldn’t have done this tonight without the unstinting work carried out by Mark Coneybeare, our Club steward and I’m looking forward to building on the success of tonight as we approach our bicentenary in 2024 and then the 50th Anniversary in 2027.”