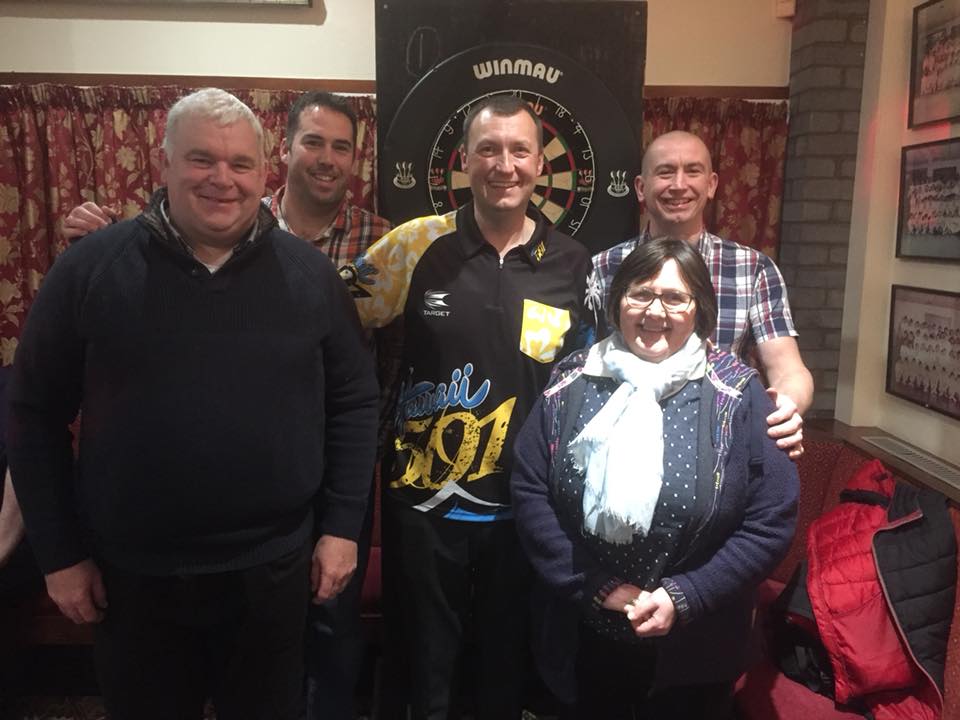 Raised in Romford, the die-hard Tottenham Hotspur supporter Mardle is also a keen ‘recreational’ golfer who also enjoys most sports. He plays poker on the Grovesnor Poker Tour, reaching the final table recently in finishing seventh whilst in his younger days he was a BMX stunt rider before darts became his life.

A well rounded, witty and respectful ‘mine host’ Mardle’s family plays a key role in his life and he has taken the opportunity to co-author a book with Ian Spragg, about the ups and downs in his life, entitled ‘Hawaii 501 – Life as a Darts Pro’. Wayne brought to the stage his charismatic performance and was loved by those fans present at the evening, co-ordinated by Lee Chenery and Craig Jones.

Lee exclaimed: “Just listening to Wayne on stage, you had to chuckle about his inquisitive and engaging mantra and why he remains so popular across the world, as he is one of the faces of darts, the second most viewed sport after Premier league football”

Mardle, known worldwide by his ‘Hawaii 501’ nickname, was joined as master of ceremonies by ‘Little’ Richard Ashdown, the Head British Darts Organisation Referee. His entrance to the Oche saw him draped in a floral Hawaiian shirt, shaking his hips to his catchy theme tune from the 1980s US TV show Hawaii 5.0, which sparked a response with the crowd jumping from their seats.

In ‘calling the board’ Ashdown engaged the audience to take on Mardle in 1:1 games on stage.

Fundraising for the two nominated charities was fundamental to the evening and leading the way was DJ Wayne Lewis, who rumbled the tunes and stage managed the ‘walk ons’ for those lucky enough to tackle Mardle in the head to head games. The honour of victory fell to Stephen Jones, Anthony John and Jack Bevan, where Mark Morgan, Paul Hughes, Scott Nash and Michael Osborne were also called to the oche by Ashdown after winning the raffle draw to play Mardle who made his debut on the BDO circuit in 1993.

From this debut his nickname ‘Hawaii 501’ was established after he wore a Hawaiian shirt on the oche, for a bet.

Mardle made his first appearance at the BDO World Championships in 2000, joining the PDC in 2003 and reached four semi-finals, before illness forced him to retire.

He added: “The show was brilliant, with everyone enjoying the wisecracks from Wayne and Little Richard, joining in the spirit of the evening. It was the little things which made it happen, like Hayley Francis-Owens for scoring the games on the screen; Pembrokeshire certainly benefitted from the night, with the Belles Story and the Catrin Vaughan Foundation the real winners.”