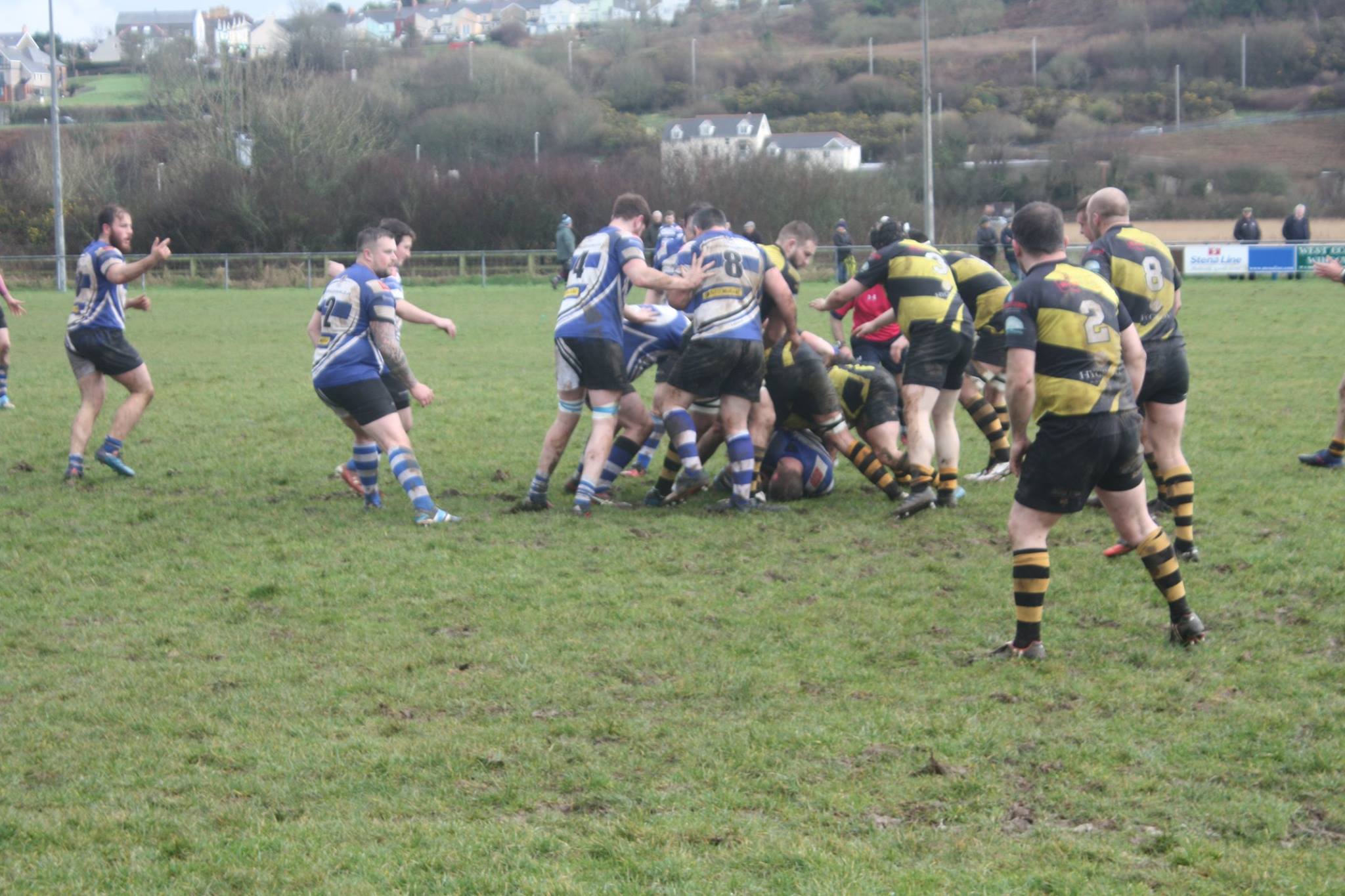 A MONUMENTAL effort by the Fishguard forwards on the Moors in the several minutes of overtime on Saturday (Feb 17) failed to secure a bonus point for the home side as promotion chasing Pontarddulais took a maximum five points from their 28-20 victory.

The silver streaked No. 8 Simon James claimed a try, his second of the game as the Seagulls never say die attitude epitomised the battle scars of Luke Harding, whose life was remembered with an impeccable minute’s silence for ‘The Gambler’ before kick off.

Luke, since his diagnosis of lung cancer 16 months ago had fought on the coal face every step of the way, raising more than £30,000 for Withybush Hospital but succumbed when his skills were required elsewhere and he knew ‘when he didn’t have the aces’ needed to win the game.

Having secured their third try outside half Kial Keane was unable to convert for the bonus point and referee Darren Randell signalled the end of the Division 2 encounter.

Referee Rendell had irked both sets of supporters during the game, his empathy for the underfoot conditions and numerous marginal decisions on the gain line, perhaps not seen impartially.

The Llanelli butcher did well to keep thirty players on the field as the physical encounter saw several flare ups with handbags flying and his shrill whistle echoing around the Paraddog towards the Irish Sea. Those final minutes saw Fishguard skipper Kevin Walsh elect for two scrums alongside some tap and goes as the visiting defence, so strong throughout the game overstepped the offside line to ignite the blue touch paper.

The opening score came from teenage Pontardullais scrum half Ethan Dunne who marked his senior debut with a try after nearly twenty minutes.

Fishguard had enjoyed possession and territory in the lead up to the try with scrum half Andrew Williams dynamic before full back Liam Lazarus picked up the loose ball inside his own half, kicked over the top from which Dunne won the foot chase with some neat dribbling skills to tumble across the line.

Lazarus converted as he did for all the visitors four tries, alongside a commanding performance in defence and with ball in hand, comfortable to back his own skills, pace and decision making.

Lazarus wasn’t the only player to show an aptitude for direct running, opposite number Mike Jenkins and winger Sam Kurtz were anything but conservative in their running angles and support play, the hosts having flankers Chris Sousha and Luke Freebury on hand to keep their momentum alive.

Keane landed a penalty for a 7-3 score line before the ‘Bont’ crossed for a second try, Lazurus converting his own touchdown after winger Jared Walters created the space.

Second row Jacob Miles began the second period in a marauding style finding centre Gareth Thomas and outside half George Mbjoma willing ally’s as the ‘Ambers’ took control of the game.

Despite calls for offside at a line out and for a knock on in midfield, Thomas was able to cross for a converted try with six minutes played to extend the lead to 21-3.

Some ferocious and uncompromising tackles in midfield from both sides saw the back rows exchanging pleasantries on the ground, the visitors Rhys Samuel and fellow flanker Dean Courtney on par with James et al.

Winger Thomas George rounded off some excellent team play to reduce the deficit with an unconverted try, where hooker Walsh and fellow front row men Ryan McVeigh and Andrew Morrilo found a second wind, allowing centre Ben John and Narberth’s Dan Birch, on permit for a return to action after a metatarsal injury on the opening day of the season some space to run, with Kurtz crabbing in the background to link the play.

Gethin Williams, Thomas and co centre Paul Geary also took the opportunity to take the game forward, their play creating the bonus point try for No 8. Craig Davies, with replacement prop Andrew Williams of Woodpecker Carpentry a splinter in the home defence with his tenacity.

Fishguard to their credit responded by keeping the ball alive despite the fact second rows Jac and Gwylim Evans had parity in the line out, both involved in the open play with Walsh in gaining hard yards.

James scored the first of his brace, which Keane converted to set up the grandstand overtime finish, where John and Jenkins, alongside McVeigh were in the thick of the action to set up the final try from James.

Bill Shankley may not have been right with his ramblings and I’m sure Luke will now have told him, his legacy being one of having that final ace.

The Seagulls will carry that with them to Mumbles on Saturday (Mar 3), as they stand four points clear of relegation whilst Pontarddulais will be geared up for a top of the table encounter when Whitland arrive at Coedback Parc.

All Blacks keep Quins at bay