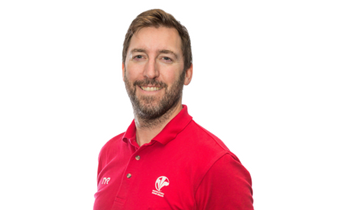 Swim Wales work closely with their Regional Development Centres where Antwhistle has a critical friend role towards supporting Pembrokeshire Head Coach Craig Nelson and his Assistant Sam Jones who are working with the best swimmers in Pembrokeshire.

The overall aim is one of driving forward a pathway for producing success on the international stage, with the Governing Body offering opportunities to all swimmers in the Principality to reach that goal.

Pembrokeshire County is an integral cog in this wheel where swimmers in the National Performance squad and National Development squad are on his radar and from his recent visit he commented, “I’m impressed with the progress with swimmers from Pembrokeshire, where it was a noted success their performances at the Swim Wales Welsh Winter Open.”

Prior to taking up his position with Swim Wales Antwhistle was High Performance Coach for British Swimming based at Bath National Centre, an impressive credential for a man who has been coaching for over two decades.

Antwhistle has an abundance of skills, knowledge and a positive personality where his enthusiasm rubs off on swimmers, coaches and parents as Swim Wales strive to develop their performance pathway for clubs and coaches.

Antwhistle went on to say: “The progress of Pembrokeshire swimmers is clearly visible from when I last visited in November; credit to the squad for taking on board the messages of both support and challenges that I have set them as they are responding.

“If they can see the progress within their training and recognise what they are doing well whilst also having an objective view of the areas they need to improve, then they can believe in themselves to deliver the performance they deserve at next month’s Easter National championships.”

The Pembrokeshire squads have the support of a volunteer committee, headed by Chairman Paul Hayley (Tenby Dolphins), who works closely with the coaching team, Swim Wales and Pembrokeshire Leisure who are funding partners in the initiative.

Recent developments have seen the swimmers working under the guidance of Strength and Academy Wales and Claire Davies [Physiologist] to provide the best opportunity for achieving success.

Antiwhistle concluded: “The biggest challenge is to maintain focus as all of the ten performance clubs in Wales are now receiving this level of support and we are aiming for the sport to become ever more competitive.”

With Swimming on such a high in the County, the performance programme is attracting swimmers who weren’t previously based in the County which shows there is no better time to join the umbrella pathway for swimming.

Young people, after completing Wave 6 of the Learn to Swim programme can join one of six development clubs (Pembroke & District; Tenby Dolphin; Haverfordwest Seals; Milford Tigers; Fishguard Flyers and Preseli Panthers) and could then progress to the Performance Squads and possibly International success.

Biggar, Williams and Halfpenny in Wales team to face Ireland