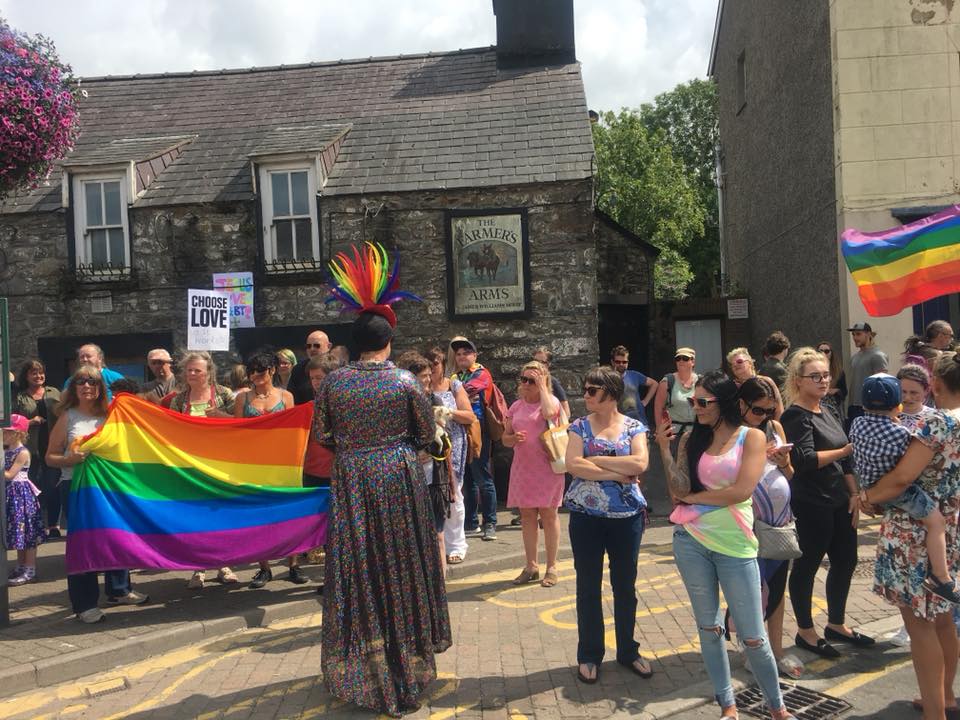 A PROTEST was held in Fishguard yesterday afternoon (Jul 15) in response to a planned meeting which was intended to host anti-LGBTQ+ (Lesbian Gay Bisexual Transgender Queer) topics of conversation.

The meeting, organised by the group Evangelists Corner, had been advertised in the town via a leaflet which promoted anti-LGBTQ+ opinions.

The leaflet explained that the meeting would deal with the subject of same-sex marriage and transgender people, as well as their desire to stop teaching LGBTQ+ material in schools and replace it instead with creationism.

The protest was organised in response to the ‘homophobic’ message of the flyer and meeting agenda, and was well attended by various age groups and people of different sexual orientations.

Following the controversy caused by the leaflet, the meeting was cancelled, however the protest went on as planned to show ‘unity’ and ‘love’ which is strong in the community.

Police have received numerous official complaints about the literature and are now investigating. Following the protest, two organisers of the protest, Matt Townsend and Jackie Jones, met with the spokesperson of the Evangelist group, John Fransham, at Fishguard police station.

There they discussed the issues raised in the literature – however Fransham defended the content of the flyer and the reasons for organising the meeting.

A spokesperson for Pembs LGBTQ Plus said after the event: “Thank you. This all too often is a gesture over-used, underappreciated, and haphazardly used. Today though, I use it with heart-felt appreciation for what you managed to achieve yesterday.

“Yesterday, you all did Pembrokeshire, the LGBTQ+ community and yourselves proud. We turned something that was extremely hurtful, upsetting and negative into something beautiful, positive and almost cathartic. To see you all united with a common goal sent a clear message: love overcomes hate.

“I spoke to many of you yesterday and felt privileged to hear individual stories, reasons for protesting and what yesterday meant to you. We have also been inundated with beautiful photographs. The adage reminds us that a photo says a thousand words – and many words were spoken. “The public response to the weekend’s  events has been overwhelming. We have received messages of support, encouragement and love from many people at home and abroad. It is no exaggeration to say that your voices were heard globally. To think this happened from a small (and beautiful) town in Pembrokeshire is all the more humbling.

“I was invited to speak with the distributors at the police station yesterday. The police investigation is still ongoing. All I will say is that it was a very emotional dialogue and reaffirmed for me why we had to do what we did yesterday. As I said to the police and the distributors of the leaflet, we are not in any way protesting of their right to their own opinions. When this opinion does cross the line of law and has the potential to incite hatred and put at risk the safety of the LGBTQ+ community, then we have a duty to act.

“We have received a few messages and emails in the last 24 hours stating that the leaflet does nothing to incite hatred and/or violence. However, PembsLGBTQPlus challenges this. The content of the leaflet is such that it has the potential to incite hatred, to the extent that the police are investigating.”