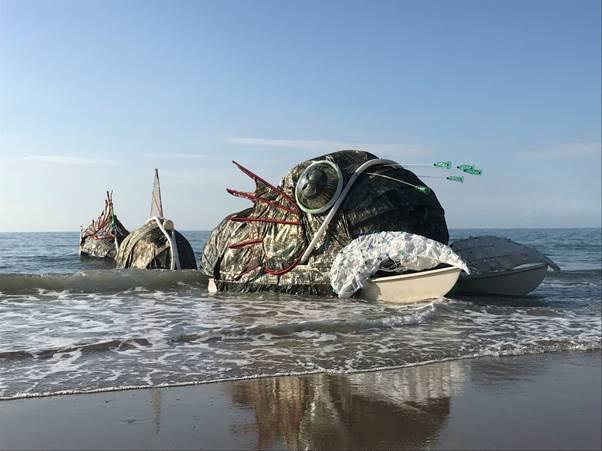 THE MYTHICAL Cragen is set to visit the shores of Pembrokeshire with a message to clean the seas.

Visitors to Tenby, Stackpole and Goodwick will have a chance to catch a glimpse of Small World Theatre’s new mythological monster, which will appear along Wales’ epic coastline throughout the summer during the Year of the Sea.

Last Friday (Jul 20) Aberporth witnessed the first sighting of the Cragen off the Ceredigion coast, as hundreds participated in a beach clean, before the 20 metre long sea monster emerged with the message to keep the waters clean.

The Wales Way is a new family of three national routes that will lead visitors into the heart of real Wales. The Coastal Way travels the west coast around Cardigan Bay, a 180-mile road-trip between the sea and mountains. The Cambrian Way crosses the spine of Wales for 185 miles between Llandudno and Cardiff. The North Wales Way leads 75 miles into the island of Anglesey.

There are many accounts of sea monsters during ‘The Age of Exploration’ when European explorers sailed into uncharted waters. Their appearances were often thought to be prophetic, the harbingers of doom and disaster, or portents of great change.

Members of the public are invited to visit Cragen performances between July – December and participate in activities and events alongside the Wales-wide tour, including The Wildlife Trusts ‘Sea Wales 7D’ Augmented Reality Roadshow (where you can learn about some of the incredible marine wildlife that calls Wales home), beach cleans organised by Keep Wales Tidy and National Trust Wales and family activities galore organised by Pembrokeshire Coast National Park Authority and others.

Minister for Tourism, Culture and Sport, Lord-Elis Thomas said: “The Year of the Sea gives us an excellent opportunity to show our fantastic coastline to the world. From our 50 islands, our 230 beaches with more Blue Flags per mile than anywhere else in Britain – to our world-first 870mile long Wales Coast Path.

“However, it also gives us a platform to raise awareness of the need to care for our environment – and the impact our activities can have on our seas and coastline. The Welsh Government is committed to reducing the use of single use plastics, and I’m delighted that we’ve been able to support this innovative project by the Small World Theatre. Cragen will help raise awareness of the impact of single use plastics and the backdrop of our amazing coastline will be a reminder of the beauty that needs to be kept for future generations.”

The project received funding via the Tourism Product Innovation Fund (TPIF) and is supported through the Welsh Government Rural Communities – Rural Development Programme 2014-2020, which is funded by the European Agricultural Fund for Rural Development (EAFRD) and the Welsh Government; the Fund aims to encourage new innovative product ideas working in partnership which will have a greater impact and attract more visitors.

The Cragen will be at Tenby North Beach on July 27, Stackpole Quay on August 3 and The Parrog in Goodwick on August 17.