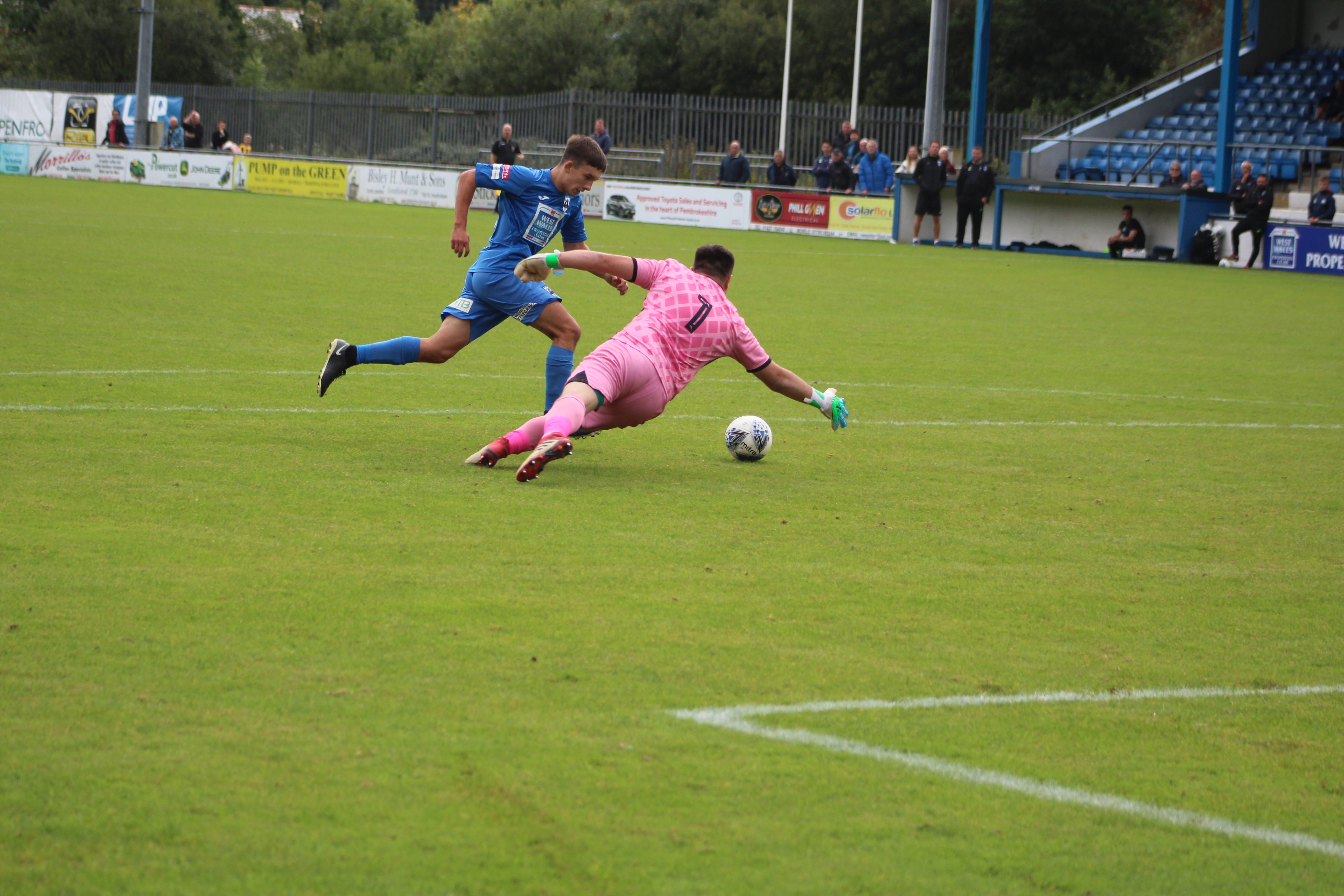 TWO extra time goals from Ben Fawcett sent Haverfordwest County into the third round of the League Cup at the expense of holders Bridgend Street on Saturday (Sept 8).

The Street had beaten Haverfordwest County on their way to winning the Cup last season and the Bluebirds were out for some revenge in manager Wayne Jones’ first game in charge.

Both sides had chances early on but it was the Street who went ahead as Paul Fowler tucked away a penalty midway through the half.

The Bluebirds looked to get themselves back into the game and eight minutes before half time they did just that as Elliot Scotcher crossed into the box for Sean Pemberton to head home. Then on the stroke of half time Trundle was brought down in the box and he was given the chance to put the Bluebirds into the lead. He made no mistake and the home side led 2-1 when referee Tom Bevan blew for half time.

Scotcher then saw a shot go just wide at the start of the second half before he again teed up Pemberton but this time his header was wide of the mark.

After some good build up play, Trundle played the ball through for Ricky Watts but he shot over the bar.

Ben Fawcett was then brought on for Trundle with fifteen minutes to go and he nearly had an instant impact but his header went wide.

Then with ten minutes to go the visitors levelled as the ball was played to Callum Smith after keeper Steve Hall had come out of his net and the striker shot into an empty net.

It looked as if the game would go to extra time but with four minutes left Leon Luby played an excellent ball to the back post for Jack Wilson who volleyed in superbly to make it 3-2.

There was still time for more drama when Fawcett won the ball back before going one on one with keeper Damian Lack who just got a hand on it to pluck the ball away.

Watts also saw a shot saved before Lack pulled a dangerous cross out of the air with Fawcett waiting to knock in.

With time running out Bridgend looked to force the game into extra time but Luby was in the right place as he cleared a David Brooks effort off the line.

In the last minute of time added on captain Paul Fowler unleashed an unstoppable shot which flew into the top left hand corner of the net. An extra thirty minutes was needed to see if the teams could be separated and it was the Street who nearly went ahead when White flicked through for Brooks but his shot was saved.

Smith then saw a shot go over before Fraser Finlay hit the post for the Bluebirds.

Six minutes into extra time Fawcett fired into the top corner to put the home side into the lead.

Five minutes later a corner wasn’t cleared properly and sub Michael Nessbert lashed the ball into the net to level the scores once again.

Bridgend again had another chance to score but it remained 4-4 when the whistle went for half time.

The second half of extra time got underway with the Bluebirds looking to get themselves back into the lead for the fourth time.

They did just two minutes in as Ricky Watts won the ball well on the edge of the box and he crossed to the back post for Wilson who headed back across into the middle for Fawcett who headed in.

Wilson then saw a header saved as the home side looked to make the game safe.

Bridgend pushed for another equaliser but tempers boiled over as Brooks was shown a second yellow card for a kick out and goalscorer Nessbert was also given his marching orders for what appeared to be dissent.

They then saw the game out to book their place in the next round and they will look forward to seeing who they will be drawn against.

Before that the Bluebirds will return to league action on Saturday, September 15, when they play at home to Afan Lido, kick off 2:30pm.

Fantastic Four get Wales off to flying start