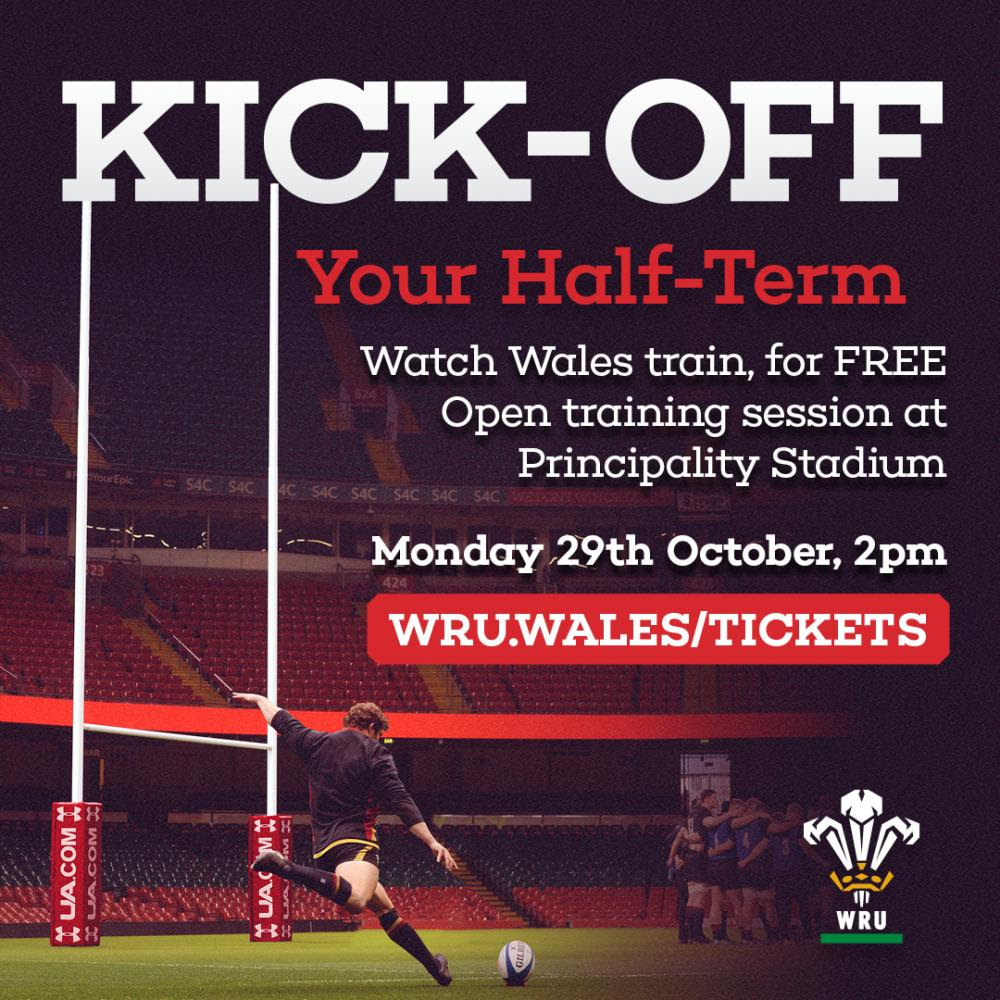 WARREN Gatland’s Wales will train at Principality Stadium this half-term, from 2pm Monday, October 29, and the nation is invited to come and watch, for free.

Wales have hosted open sessions at their national ground ahead of the last two Rugby World Cups, with around 10,000 fans attending in 2013, before England2015, and also in both 2011 and 2012, before travelling to the tournament in New Zealand.

With 13 matches in less than 12 months to go until Japan2019 the build-up begins in earnest when head coach Gatland’s side face Scotland at home on Saturday, November 3, followed by Australia, Tonga and, finally, South Africa on consecutive weekends thereafter in this year’s Under Armour Series.

Over 200,000 tickets have already been sold across the four match campaign, with remaining tickets starting at £45 per head for adults (£15 concession) and £10 (Tonga), for the games – but supporters now have a fifth opportunity to see their heroes in action in Cardiff for free courtesy of the invitation issued by Gatland today:  visit www.wru.co.uk/tickets to register for your free ticket.

“We have some of the game’s most passionate and dedicated supporters in Wales and it’s fantastic that they are able to watch us train at the world’s best rugby stadium,” said Gatland, who is Wales’ longest serving and most successful coach, entering his final year at the helm.

“The open session kicks off our Test week ahead of the opening Under Armour Series encounter against Scotland and it should give supporters a great insight into the squad and our preparations.

“We know we will be well supported this autumn against Scotland, Australia, Tonga and South Africa, and fans will come out in force during the Six Nations, and for our warm-up matches next summer, but I can’t think of a better way to begin a huge year than by inviting everyone into the Stadium for free at the very start of it all?

“It’s not often supporters get the chance to see the players train in this way and as a squad we are looking forward to the session and hopefully training in front of a big crowd.” Gatland will take charge of the kind of a typically intense training session he has become famous for, with fellow coaches Rob Howley, Shaun Edwards, Robin McBryde and Neil Jenkins all involved in various elements.

Gates open at 12.30pm and the squad is due to take the field soon after 2pm, with all of the action due to be played out live on Stadium big screens and commentary and ‘special guest’ interviews providing the backdrop to the day.

The format will evolve whilst the squad are in camp, as new formations are perhaps built and the opposition continues to be analysed, but the sessions usually last around 50 minutes.

Individuals who may not be involved and back room staff will be available to speak to the crowds via the Stadium PA system to give unique insight into the day’s proceedings and catering outlets will be fully stocked and available for supporter’s use.

Tickets are free at the point of registration online at www.wru.wales/tickets and can be printed at home right up until event day on Monday, October 29, with a six person limit applying to each registration.

When accessing tickets supporters will be given the opportunity to automatically donate to the My Name’5 Doddie Foundation and Welsh Rugby Charitable Trust, although there is no obligation to do so with £0, £1, £2, £5 options available.

The Welsh Rugby Union and Scottish Rugby Union have joined together to create the Doddie Weir Cup, to be contested when Wales and Scotland meet, and are fundraising in the name of the former Scottish international at the fixture to support research into Motor Neuron Disease, donations to the charity can also be made directly online via myname5doddie.co.uk/donate

The Welsh Rugby Charitable Trust is the WRU’s permanent designated charity which supports players who have been injured through rugby.

“We are extremely grateful to our partner Ticketmaster for their help in making sure 100% of donations made will transfer over to the Doddie Weir Foundation and the Welsh Rugby Charitable Trust and helping us ensure access to the training session is entirely free of charge,” added a WRU spokesperson.

Under Armour Series 2019 at Principality Stadium: