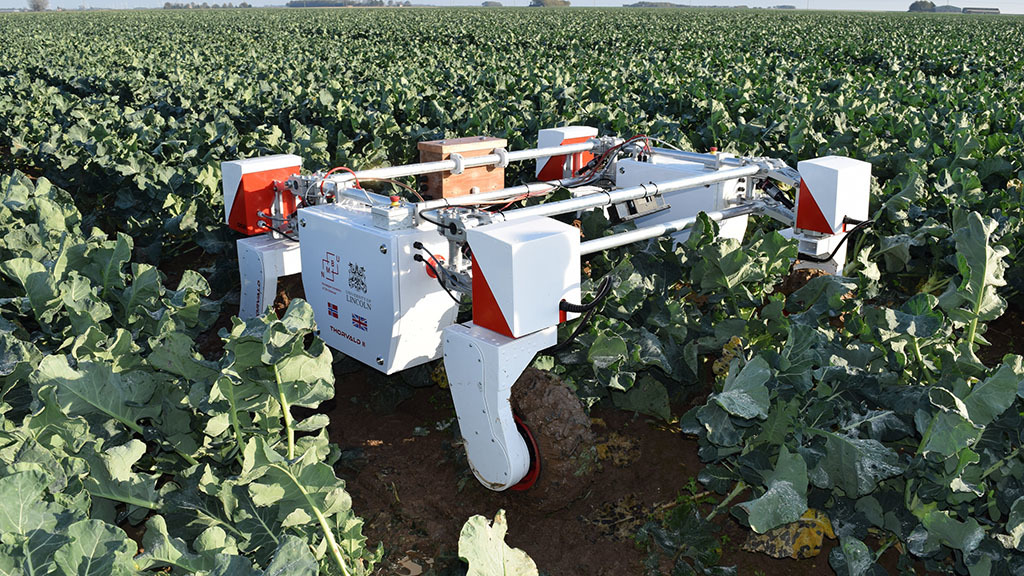 A NEW advanced training centre in agri-food robotics will create the largest ever cohort of Robotics and Autonomous Systems (RAS) specialists for the global food and farming sectors, thanks to a multi-million-pound funding award.

The Engineering and Physical Sciences Research Council (EPSRC) has awarded £6.6m for the new Centre which will see a massive influx of high-level robotics expertise at a vital time for the agri-food industry. The CDT will provide funding and training for at least 50 doctoral students, who will be supported by major industry partners and specialise in areas such as autonomous mobility in challenging environments, the harvesting of agricultural crops, soft robotics for handling delicate food products, and ‘co-bots’ for maintaining safe human-robot collaboration and interaction in farms and factories.

Professor Tom Duckett, Professor of Robotics and Autonomous Systems at Lincoln, is the new Centre Director. He said: “Automation and robotics technologies are set to transform global industries – within the UK alone they will add £183bn to the economy over the next decade.

“Agri-food is the largest manufacturing sector in the UK – twice the scale of automotive and aerospace combined – supporting a food chain, from farm to fork, which generates a Global Value Added (GVA) of £108bn, with 3.9m employees in a truly international industry.

“However, the global food chain is under pressure from population growth, climate change, political pressures affecting migration, population drift from rural to urban regions, and the demographics of an ageing population in advanced economies.

“Addressing these challenges requires a new generation of highly skilled RAS researchers and leaders, and our new CDT will be dedicated to delivering that expertise. It will be a real focal point for robotics innovation in the UK.”

At Lincoln, the CDT represents an important partnership between robotics researchers from the Lincoln Centre for Autonomous Systems (L-CAS) and agricultural experts from the Lincoln Institute for Agri-food Technology (LIAT), as they work together to combat these pressing issues facing the global food chain.

Director of the Lincoln Institute for Agri-food Technology, Professor Simon Pearson, said: “It is widely agreed that robotics will transform the food and farming industries in the coming years, but there is still a major skills gap in this area. Working with our industry and academic partners to design the 50 PhD scholarships will enable us to expand the UK’s science and engineering base, delivering a flood of skills and expertise that will drive our food and farming industries into the future.”

Professor Richard Harvey, Senior Lecturer in Computer Science at UEA, added: “Agriculture remains an important and atavistic activity in the UK but it the most dangerous of all the main UK industry sectors. Given that, isn’t it astonishing that so much effort is devoted to robots for driving and delivering parcels to your door?

“This project will initiate a new movement to build robots to handle the unpleasant, difficult and repetitive aspects of farming. At UEA our expertise is in Computer Vision which is making computers that see. We’d like to build robots that can see when an ear of corn has ripened or be able to measure the amount of sunlight falling on a field of wheat or to tell when beans are ready for picking. We look forward to developing new systems that handle the challenge of being on a farm.”

The Centre brings together a unique collaboration of leading researchers from the Universities of Lincoln, Cambridge and East Anglia, together with the Manufacturing Technology Centre, supported by leading industrial partners and stakeholders from across the food, farming and robotics industries. These include John Deere, Syngenta, G’s Growers, Beeswax Dyson, ABB and the Agricultural and Horticultural Development Board.