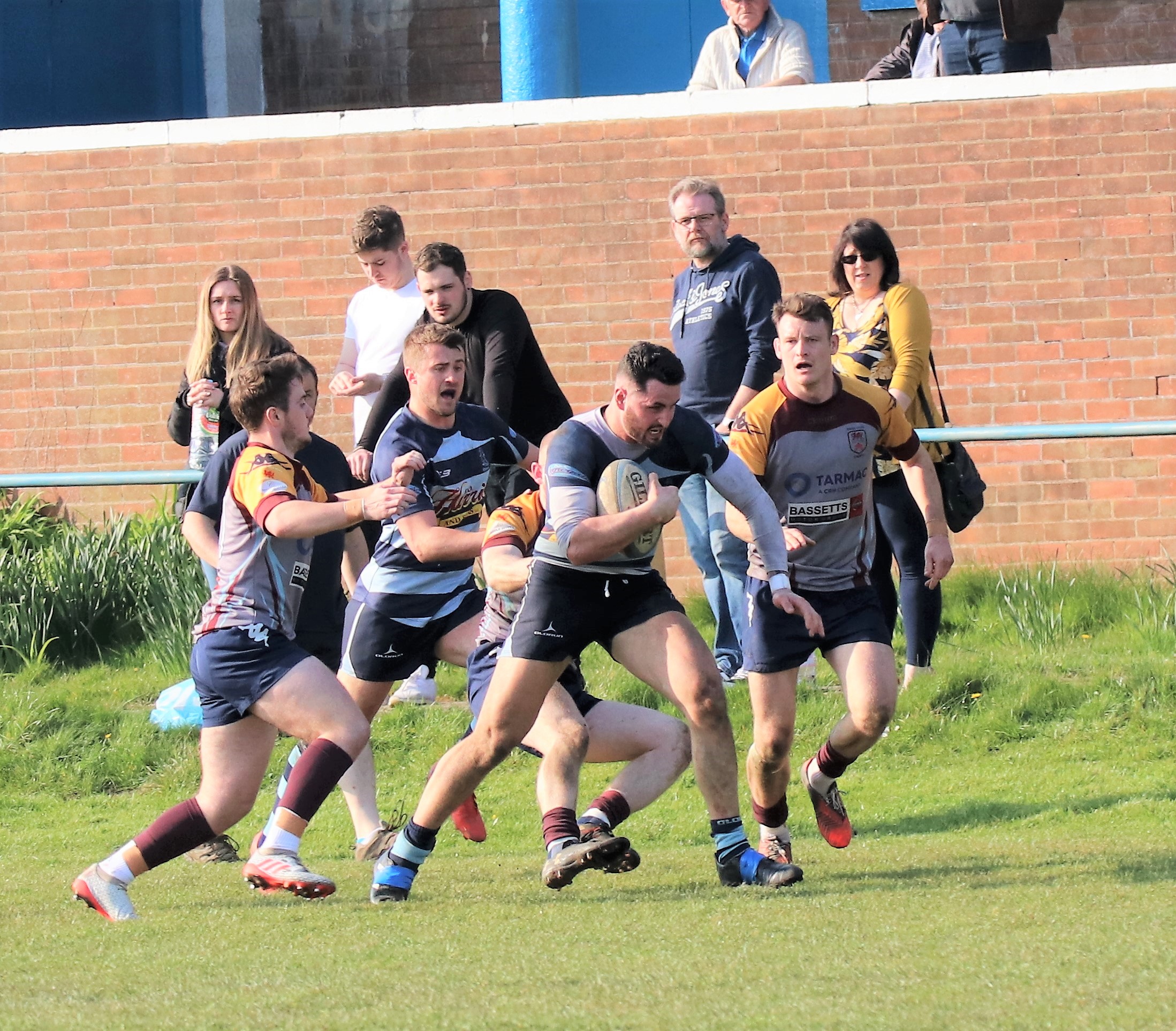 A SLOW start cost Narberth on Saturday (Mar 30) but they still put up a big fight before succumbing to a 42-34 defeat at the hands of Tata Steel.

The Otters fielded a few replacements due to injury but the subs bench was strong with experienced, hardened players likely to make an impact.

Tata attacked from the off with some early pressure with the Otters defence holding firm. Both sides attempted to move the ball through the hands but the strong tackling created a number of knock ons’.

Play remained in midfield until the Steelmen set up a kick and chase scenario which the Otters safely minored as it went over the try line.

The first try came ten minutes into the game with Tata Steel advancing into the Otters 22 they stretched the Otters defence enabling their wing Morgan Williams to sprint through the gap created to score with fly half Dan Gurenani converting.

Within two minutes, the Steelmen scored a second try. The Otters restarted the game after the first try and quickly set up an attack only to lose possession in the close forward exchange. Tata Steel moved the ball quickly with flanker Dan Griggs breaking through to score with Dan Gurenani converting. Suddenly Tata Steel had a fourteen point to nil lead and looked very threatening with such a start. The Otters responded and Keiron Jones made an effective break to reach the Tata Steel five metre line before he was tackled. A lineout followed with the Otters winning the jump setting up a maul which quickly collapsed with the ref awarding Tata Steel a scrum.

The Otters continued their efforts and were awarded a penalty thirty metres from the line which Jonathan Rogers slotted over for three points. Tata Steel restarted using a grubber kick and when the Otters attempted to collect and move forward they knocked the ball forward in the tackle. The ref blew his whistle and awarded a scrum which had to be reset and once the scrum was set the ref awarded the Steelmen a penalty which was about forty metres from the posts, Dan Gurenani kicked adding a further three points making the score 17-3.

Five minutes later on the half hour the referee awarded Tata Steel a controversial penalty try. They were attacking close to the Otters line and from what appeared to be a simple knock on awarded the penalty try.

This was followed with the Otters setting up attacks but knocking on in the tackle. Scrum half Lewys Gibby from the heel passed to the right before there was another knock on.

However, after a series of plays Jack Price regained the ball and in typical barn storming style forced his way over the line for an unconverted try to make it 24-8 at half time.

Whilst the Steelmen looked the stronger side, Otter supporters were remembering a past game where they were losing quite heavily but turned the game around and ended winning.

Tata Steel restarted the second half and begun to look the stronger scrummaging team.

Jonathan Rogers gathered the restart and responded with one of his long kicks which Tata Steel gathered and attacked strongly up field only to knock on at the breakdown. Rogers replied kicking into touch well into the opposition half. Tata Steel failed to throw the ball straight at the lineout and the ref awarded the Otters a scrum. The Otters made a further change with Dan Jacobs replacing Dewi Williams with Tom Kaijak moving into the second row. This change restored the Otters scrummage with the Otters heeling, Tom Powell broke away from the scrum and fed Lewys Gibby who passed to Jonathan Rogers. He then threw a long pass out to Jack Price who moved strongly forward before handing the ball to wing Yannnick Parker who crossed the line for an unconverted try.

Within five minutes Tata Steel responded with a try by replacement Steff Davies again converted by Dan Gurenani to make it 31-13.

From the restart, the Tata Steel number eight gathered the ball broke out of their half and in the movement that followed the Otters defence were adjudged offside. This enabled Dan Gurenani to kick a further three points to their score on fifty minutes.

The Otters rallied, Jonathan Rogers kicked into touch on the opposition 22. Tata infringed and the Otters kicked towards the corner. At the lineout Alex Jenkins jumped and taking clean ball set up a rolling maul, the ball was released and moved right with Tata Steel defending defiantly before Jack Price forced his over for his second try. Ianto Griffiths came forward and converted the try. The score was now 34-20.

The Otters followed this with a further attack before conceding a penalty which Dan Gurenani added a further three points. From the restart the Otters set up several attempts to proceed downfield with Jack Price prominent as he forced his way over the gain line.

On 64 minutes he took a quick penalty in the opposition 22 and crossed the line to touch down. Again Ianto Griffiths converted bringing the score to 37-27.

On 70 minutes Tata suffered a yellow card for taking out Alex Jenkins. Before this the Otters moved to near the line, the referee awarded a penalty and chose a scrum. This had to be reset and after a further infringement awarded the Otters a penalty try. This had the Otter supporters on edge with the score now 37-34, a possible win seemed on the cards.

However on 78 minutes hooker Jake Lewis scored an unconverted try. This was followed by a breakout by Tom Powell who raced downfield only to be caught near the 5 metre line but unfortunately was not supported.

Tata recovered and a few minutes later the game ended with the final score 42-34 with the Otters gaining a single bonus point.

Robins hit back to earn a point