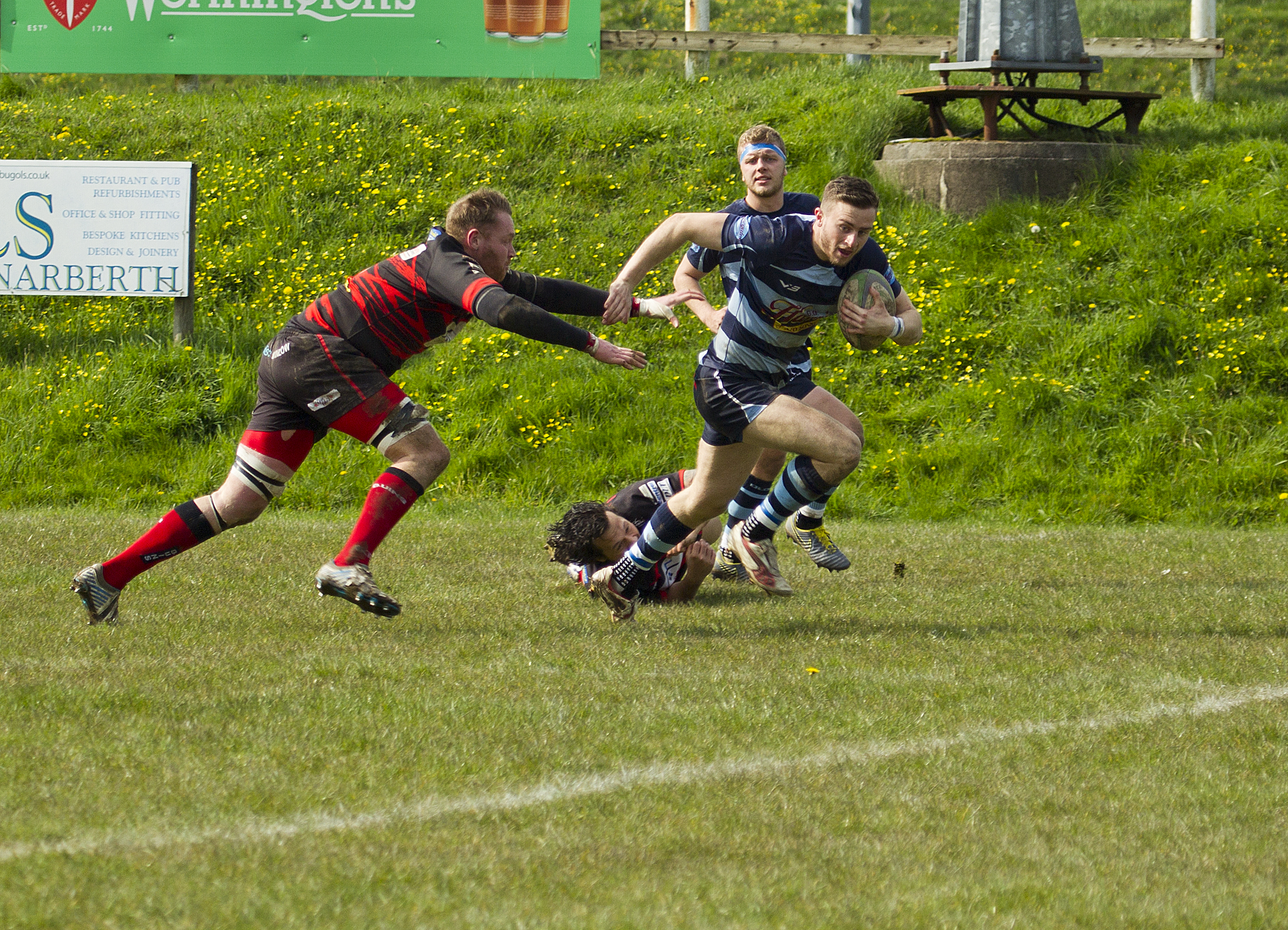 NARBERTH returned to second place in the Championship on Saturday (Apr 6), as they beat Maesteg Quins 16-11 at the Lewis Lloyd Ground.

It was the final home game of the season for the Otters and with so many of their players injured they had several permit players in the squad.

The Otters kicked off facing up field, and within three minutes were awarded a penalty for a high tackle which full back Ianto Griffiths kicked safely for a three point lead.

The visitors restarted the game and the Otters looked determined in their attacks but faltered through errors. From one of their attacking efforts Maesteg Quins were awarded a penalty which fly half Tadgh McGuckin safely kicked to bring the score level at 3-3.

Their scrum half during one of their forays actually crossed over the try line but dropped the ball as he attempted to touch down. The referee awarded a five-metre scrum which the Otters eight safely heeled for number eight Richie Rees to break clear up field before being laid low in a tackle at a ruck. After treatment he was able to continue.

A further scrum was set outside the five metre line and Maesteg Quins were able to slip the ball to left wing Alex Griffiths who evaded several tackles to touch down for an unconverted try which gave the visitors a 3-8 lead.

At a lineout a yellow card was issued to a Quins player at 26 minutes. Rogers placed the ball into touch again and the Otters pack gained clean ball and formed a rolling maul. They released the ball quickly to Rogers who kicked towards the corner. Wing Yannick Parker gathered the ball and quickly crossed the line to touch down. The referee indicated an opponent’s hand had foiled the touch down and then issued a yellow card which it is assumed was for taking down the rolling maul. Taking advantage of the resulting penalty Rogers kicked towards the corner. Roy Osborne caught the throw cleanly and another rolling maul formed.

This was stopped by Maesteg Quins by taking down one of the Otters along with their player causing the maul to collapse. The visitors gained the ball and put in a relieving kick to touch. From the lineout, the Otters advanced and at the breakdown Maesteg Quins were penalised for interfering.

Griffiths came forward and placed his 30 meter kick between the posts bringing the score on 34 minutes to 6-8.

From the kick off the Otters advanced back into the opponents half with a series of pick and drives until the Maesteg Quins again were penalised for aggressive incidents.

The referee had a long talk with their captain before awarding the penalty which Griffiths safely placed through the middle of the posts putting the Otters back in the lead at 9-8.

From the restart the Otters gathered the ball then fed Rogers who again produced a long, high kick which was fumbled by the receiver and followed by obstruction by Maesteg Quins.

This time the penalty kick hit the post, Maesteg collected the ball and placed it in touch for the referee to blow for half time.

Clearly at half time, the Otters were given some home truths by the coaches for on return to the game they scored a converted try within four minutes.

The try was well executed, on the opponents forty metre line, the ball reached Jack Price who put pressure on the Quins defence with his forceful running.

Outside him was flanker Tom Powell who quickly sped forward before releasing winger Gethin Gibby who, when challenged, passed inside to the supporting Tom Powell and in turn when challenged fed Gibby who sped like a stag down the far touch line to cross over for a great try. Griffiths made sure with his conversion giving the Otters a 16-8 lead.

Maesteg came back strongly but the game remained tight with both defences holding firm. A potential Otters try was lost when from a scrum Rhys Lane fed Rogers who found Price with his long passing and for Price to spot a gap and made a break down field only to spoil his initiative with a forward pass.

Maesteg attempted to break out of their half only for Gibby, attempting to intercept the pass, to knock on. The referee decided it was worth a yellow card.

In the following ten minutes, in one of the Otters movements, Rhys Lane made a fine break before passing to the supporting Richie Rees who was tackled and for the opposition to be penalised.

Rogers placed the ball onto the twenty two. The Otters in numbers followed through but lost the ball in a strong tackle. This time the Otters were penalised.

With the ball ending in touch, at the lineout the opposition set up a series of pick and charge phases with the ball eventually reaching wing Alex Griffiths who crossed the try line, only for the referee to bring him back having received a forward pass. The Otters srummaged on the five metres line and were able to gain relief to their twenty two.

The Otters proceeded further down field but Maesteg regained the ball and set up a move when the referee awarded them a penalty with the Otters going offside. Fly half Tadgh McGuckin kicked from 40 metres to add three points.

The game ended shortly afterwards with Rogers in his twenty two putting the ball out of play in the knowledge that full time had been reached.

Whilst the Otters have played their final home game they will travel in three weeks time on Saturday, April 27, to Maesteg to play the Quins again in their final game of the season.