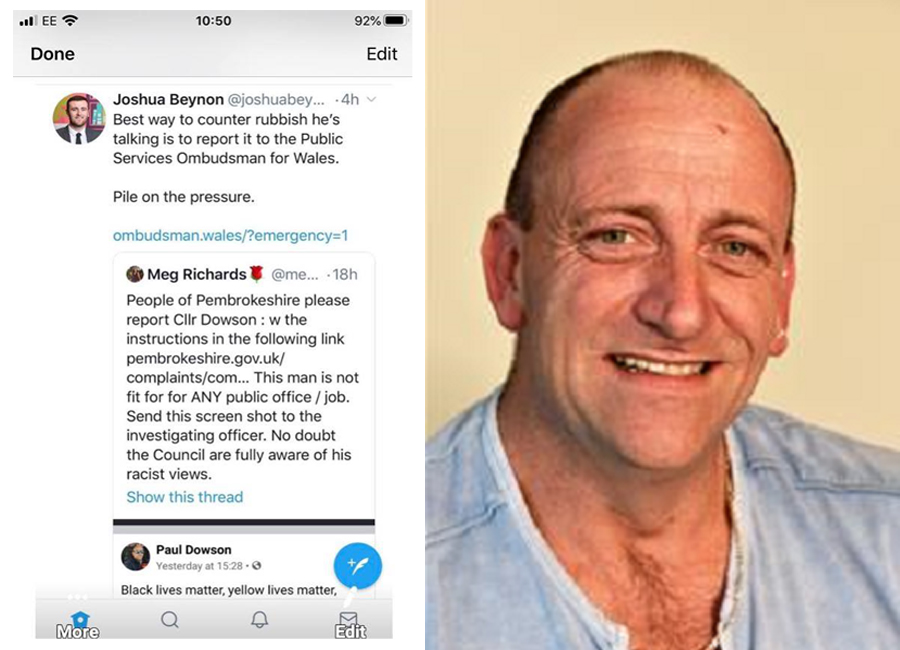 CONTROVERSIAL Pembroke Dock County Councillor Paul Dowson has hit out at his critics after Wales’ Public Services Ombudsman rejected complaints made against him after he spoke out against violence during the Black Lives Matter protests in June.

Cllr Dowson also criticised the decision to illuminate County Hall in purple as a mark of solidarity with the Black Lives Matter campaign, which gained global impetus following the death of a black man, George Floyd, in Minneapolis, USA.

The lights at County Hall were switched to purple following a request to the County Council from the Welsh Local Government Association (WLGA).

Local authorities in England were asked by England’s Local Government Association to do likewise. Many complied.

Paul Dowson was subjected to a torrent of abuse on social media and his fellow Pembroke Dock county councillor, Joshua Beynon, encouraged his followers to report Cllr Dowson to the Ombudsman for racist remarks he allegedly made.

Further allegations made by public service workers’ union UNISON regarding posts the union claims originate from social media accounts bearing Cllr Dowson’s name were aired on ITV news last week. Cllr Dowson responded with a forthright interview with BBC Wales on Friday, in which he dismissed claims he was either racist or responsible for posts UNISON complained about.

Cllr Dowson insists that the posts – which The Pembrokeshire Herald has seen and which have been circulated to local Members of the Senedd – are from accounts set up to troll him and damage his reputation.

In a statement on Facebook, Paul Dowson said: ‘My public opposition to PCC supporting Black Lives Matter protests, which saw violent attacks on our police force and which also made a mockery of social distancing laws, inspired Cllr Joshua Beynon to call upon his social media followers suggesting that they report the “rubbish i am talking” to the Ombudsman. Cllr Beynon posted a link they could use to complain and told his followers to ‘pile on the pressure’.

‘As a result, 14 complaints were made to the Ombudsman. In some cases, evidence was manufactured to support complaints. Both the Labour Party and Unison chipped in with their own complaints.

‘I received death threats and was harrassed 24 hours a day 7 days a week for around a month.

‘Today (Tuesday, August 4), I received a decision on the 14th complaint, which like all the complaints that went before them was dismissed with no further action.

‘It has certainly been an eye opener for me.

‘I thought I had seen the best and worst of people throughout my lifetime. But I certainly wasn’t prepared for the depths some people will stoop to in order to punish someone whose opinion isn’t the same as theirs.
‘Fanatical extremism is something we – as a society – have allowed to breed and prosper; we allow some of these people to weaponise the term “racist” and we fear it.

‘I have first hand experience of this new wave of extremism, they won’t silence me or bully me. The police have spent weeks auditing around 600 pages of evidence which I provided them to support a complaint I have made regarding harrassment.

‘All of this because I opposed a violent protest and some purple lights. I will continue to fight for common sense and respect. I will always call out the bullies’.