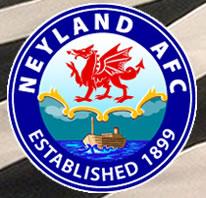 NEYLAND bowed out of the West Wales Cup on Saturday (Oct 2) as FC Bonymaen scored two late goals in a 3-1 win.

The game was one of a handful to be played as rain caused many games to be abandoned.

Neyland’s game in Bonymaen did go ahead though as they played on a 4G surface at Penyrhoel Leisure Centre.

Perhaps adapting to the different surface, Neyland started slowly and that allowed Bonymaen to score in the first two minutes, Dean Green with the goal for the hosts.

After that Neyland managed to get their shape and created chances but couldn’t do enough to level the game up. It was a feisty affair but the youngsters, alongside old heads Paul and Sean Hannon, held their own.

With the second half started and Neyland’s fitness showing they started to create more chances with Max Bowman-Davies causing trouble for the back line of Bonymaen all afternoon.

Neyland drew level when a free kick from Mike Chandler found Sean Hannon and he volleyed in after letting the ball drop over his head.

As the game entered the final ten minutes, the home side were given a dubious penalty when the ball hit Will Clewes in the box. The ball appeared to hit him high up near the face but the referee pointed to the spot.

Green dispatched the penalty for his second goal of the game.

In an attempt to get back level Neyland switched formation and with Max Bowman-Davies in on goal the Bonymaen keeper cynically brought him down and was shown a straight red card.

Another substitute Aidan Rees came on the wing and created more chances and was unlucky not to score after a great save by the substitute keeper.

As full time approached the Green completed his hat trick to seal the win and to sink Neyland’s hearts.

Neyland manager Gavin Rowland said after the match: “It is a disappointing for the boys but they continue to grow each week.”

Bluebirds earn a point against Nomads