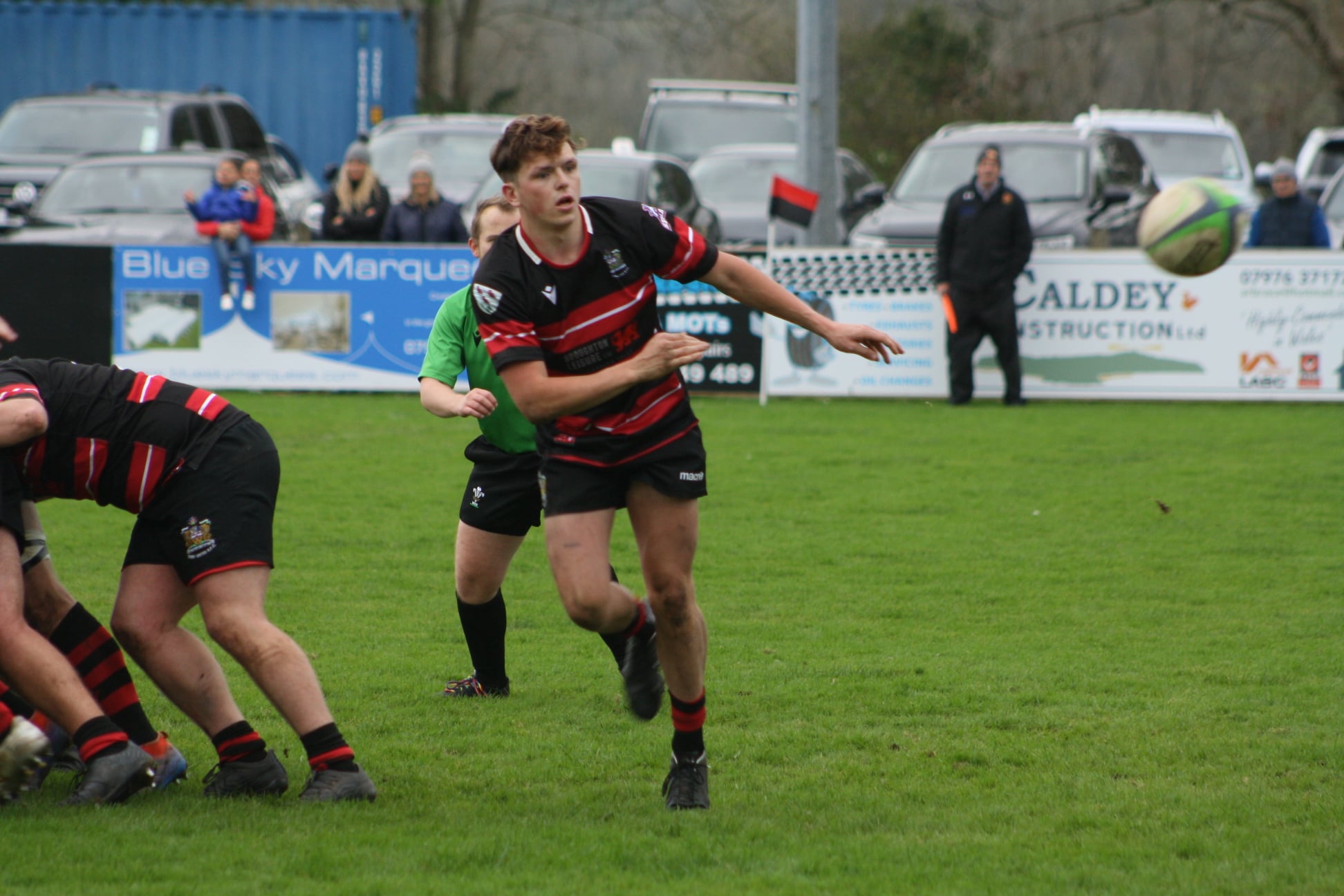 It was a tight game as wind and rain made it difficult for both teams with possession continually changing hands on several occasions.

In the first minute Crymych were penalised for being offside and the hosts elected to kick at goal. Lloyd Thomas’ effort though went wide as the scores stayed level.

However, he had chance to redeem himself ten minutes later and this time he made no mistake to put Tenby ahead.

The home side had the first score but it was the visitors who scored the game’s first try seven minutes later as Ilan Phillips broke free and scored under the posts. With the tee seemingly left in the changing room, Adam Phillips was forced to take the conversion without one and he added the extra two points.

Their lead did not last long though as Cam Broadhurst burst through to score Tenby’ first try of the game. Thomas’ conversion bounced back off the post but Tenby led 8-7.

With light rain making conditions slippery there were a number of errors from both teams as they went in search of the next score.

Crymych had a penalty on the half hour mark which they kicked to touch for a line out but although they won it they were penalised and Tenby had possession back.

Tenby were then dealt a blow with two of their players forced off with injuries shortly before half time.

The wind was also playing havoc as after Crymych were penalised for holding on, the resulting kick from Tenby did not go to touch and Crymych came forward again before the first half was brought to a close.

There was an early chance for the home side in the second half but Crymych did well to take the ball out of play.

The home side did not have to wait much longer for their second try though as replacement Adam Quill broke down the left before passing inside for Broadhurst who took the ball well above his head before running on to score under the posts.

That gave Thomas an easy conversion to increase Tenby’s lead to 15-7.

Tenby were guilty of not finding touch on a couple of occasions following Crymych infringements and it was from one of those that the visitors got themselves back in the game.

Crymych worked their way down the left hand side and it was Carwyn Phillips who just touched down despite desperate defensive work from the home side.

The conversion was missed but Crymych were now just three points behind.

Tenby looked to add to their points tally late on and came close but were held up as Crymych defended well.

As time ticked over 80 minutes Crymych had one last chance but a kick forward was knocked out of play and the referee blew for full time.