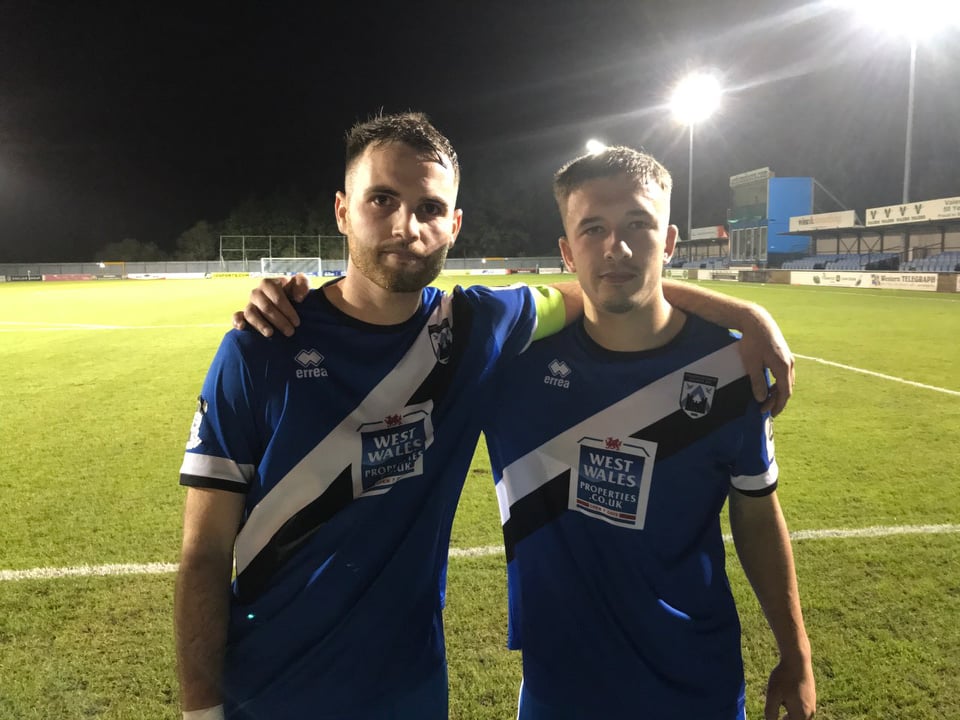 TWO goals in as many minutes sent Cardiff Met into the semi-finals of the Nathaniel MG Cup on Tuesday night (Oct 26), at the expense of Haverfordwest County.

An entertaining first half at the Bridge Meadow finished goalless but two quick goals early in the second half all but secured the Met’s place in the last four.

Cardiff Met had the first chance of the game but Adam Roscrow fired wide of the target.

Ben Fawcett then went close for the home side but he saw his effort saved by Met keeper Alex Lang.

In an end-to-end opening, Harry Owen was next to try his luck for the visitors but he was denied by an excellent finger-tip save by Wojciech Gajda.

Fawcett again went close for the Bluebirds but his volley from the edge of the box went just wide of the left hand post.

Both sides were forced into substitutions midway through the first half as Danny Williams was replaced by Alhagi Touray Sisay for the home side while Charlie Corsby was replaced by Warre.

Met then won a corner and after it wasn’t cleared the ball fell to Lewis Rees but Gajda again made a good save to keep the scores level.

Roscrow and CJ Craven had chances for the Met but they were unable to find the target.

With five minutes to go until half time Fawcett flicked a corner towards goal but his effort was well saved by Lang.

It was still 0-0 at half time after what was a competitive first half.

The chances continued early in the second half as Saturday’s two-goal hero Jack Wilson sent a throw-in into the box but Fawcett glanced his header wide.

However just two minutes later the visitors took the lead as Harry Owen shot low past Gajda and into the net.

And just a minute after that they had doubled their lead as Roscrow rounded the keeper before slotting in.

They almost had a third soon after but this time Elliot Evans shot wide of the posts.

Tom Price then tried his luck from long range but saw his effort parried but Gajda recovered in time to prevent Evans from getting to the rebound.

On the hour mark Fawcett found Touray-Sisay in the box but his effort was blocked.

The Bluebirds continued to search for a way back into the tie but it began increasingly unlikely that they would do so.

Elliot Evans sent a free kick into the box which Gajda punched clear before Joe Evans didn’t get enough on his effort to trouble the Haverfordwest keeper.

With time running out Fawcett again looked to get the Bluebirds back into it but saw his shot blocked again.

The Met saw the game out as they booked their place in the semi-finals of the Cup.

Whitland beat Aber as Welsh legend comes out of retirement