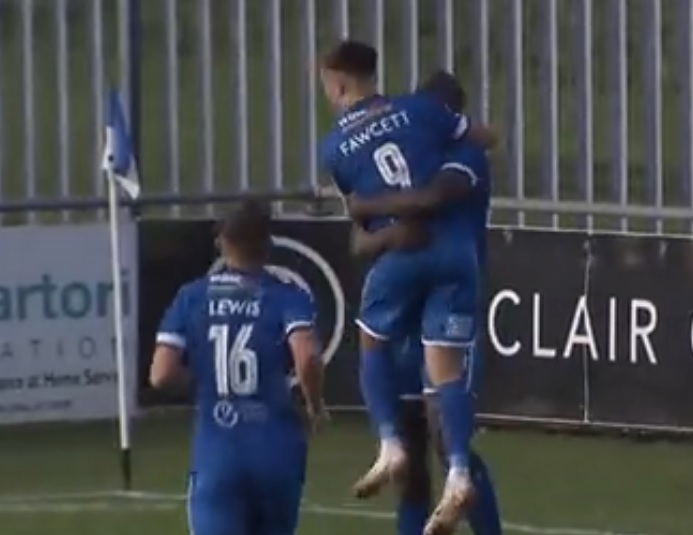 A GOAL from Alhagi Touray Sisay gave Haverfordwest County a hard-fought win over Newtown in a back-and-forth JD Cymru Premier encounter at the Ogi Bridge Meadow on Saturday (Oct 30).

The striker marked his first start since returning to the side following illness with a composed finish from close range.

The Bluebirds defended manfully throughout the game as the Robins pushed hard for an equaliser which, on another day, they could have found after spurning numerous opportunities.

Wayne Jones’ side had chances to extend their lead, but Touray Sisay’s first-half strike was ultimately enough to earn them all three points.

Captain Dylan Rees, who was named Honey Home man-of-the-match for his impressive display, nearly gave County the lead after five minutes when his poked effort at the far post was saved by Dave Jones.

The visitors went close a few minutes later when James Davies fired narrowly wide on the angle. Then, 10 minutes later, he headed over the bar from close range.

The Bluebirds took the lead when Alaric Jones’ pinpoint pass picked out Touray Sisay, who controlled the ball well before sliding it underneath Jones for his fourth league goal of the season.

Chris Hughes’ nearly equalised a few minutes later when a shot from the edge of the area was blocked by the County defence, before Davies’ effort on the rebound came back off the right post.

There was another opportunity for the Robins before half-time, with Kieran Mills-Evans heading narrowly wide from a corner.

Elliot Scotcher had a great opportunity to double the Bluebirds’ advantage in first-half stoppage time, but a nasty bobble just before he struck the ball meant his effort was high and wide.

Wojciech Gajda – who had an excellent afternoon between the sticks for County – was alert to deny Davies from close range early in the second-half. The Bluebirds stopper was involved once again when he got down well to push Aaron Williams’ free-kick away to safety.

With just three minutes remaining, Kieran Lewis nearly added a second, but his powerful shot from the edge of the area was pushed over the bar by Jones.

It mattered little, however, as the Bluebirds held on to pick up a crucial victory over a Robins side who had won four of their previous five matches in the JD Cymru Premier.

The result sees County return to ninth place in the standings, after temporarily slipping down to 10th following Connah’s Quay Nomads’ 4-0 win over Cefn Druids on Friday evening.

The Bluebirds are next in action on Saturday, November 6, when they travel to Oswestry to face current JD Cymru Premier leaders The New Saints at Park Hall. Kick-off is 14:30.

Young Otters come from behind to beat Tenby in KO Cup