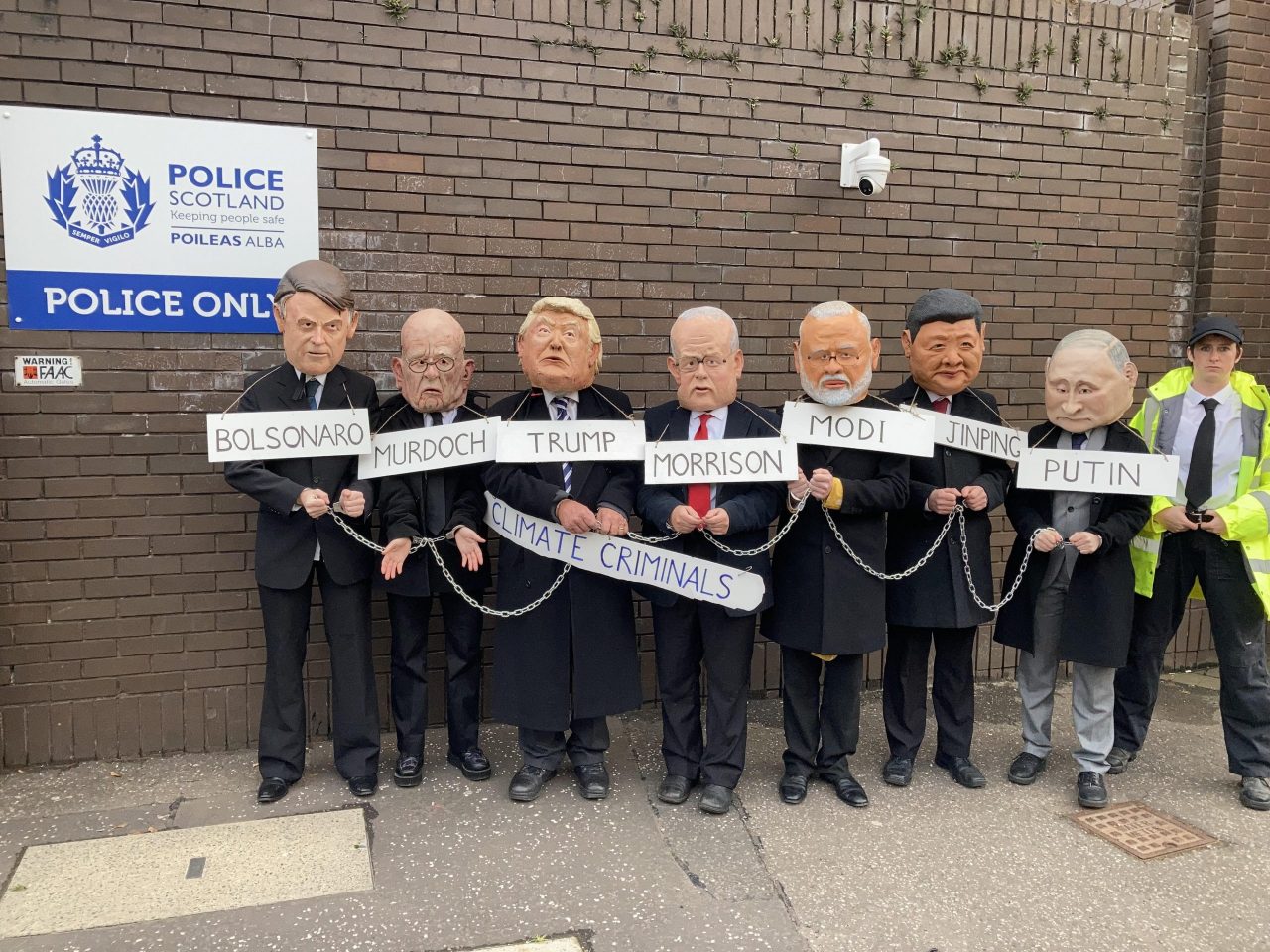 CLIMATE activists from the Cardigan and Pembrokeshire area have been rounding up world leaders at COP26 Climate Conference – and taking them in chains to the police cells! To be a bit more precise, the activists WERE the world leaders in chains, in some street theatre in Glasgow.

Members of Cardigan and Pembrokeshire Extinction Rebellion (XR) groups were wearing huge masks which were caricatures of some of the planet’s most criminal climate offenders.

The masks, moulded in latex, were made by Bim Mason. Bim is a lecturer, performer, author and one of the UK’s leading mask-makers. He co-founded Circomedia, the circus theatre school in Bristol in 1994 and moved to Angle, in Pembrokeshire, just before the first lockdown. Since then he has been involved with XR groups in Cardigan, Fishguard and Carmarthen.

Bim explains, “The aim of this piece was to name and shame those leaders and influencers who have got us into this climate catastrophe, by denying the science, delaying action or double-dealing, mainly in order to keep themselves in power. In Glasgow, the crowds booed the leaders and cheered at the fantasy of them being arrested.”

Another Cardigan XR member, Jane Mansfield, was involved in protesting outside JP Morgan Bank – a major funder of fossil fuels which are the main cause of the climate change crisis. She has also been able to meet with people from all over the world, learning about how climate change is already causing terrible suffering in so many communities in the Global South.

“We need to push our governments to provide these most vulnerable developing countries with the funding which they promised but have not delivered,” she said. “This is basic climate justice and it is essential to help the countries which are the least responsible for climate change but are suffering the most from its effects. The funding is needed to enable them to cope with climate damage, and to develop using renewable energy rather than fossil fuels. This has been agreed at previous COPs but has not been realised.”

Jane also managed to speak to Adam Price MS, the leader of Plaid Cymru, and to discuss the urgency of the situation and the ways in which Wales can play its part. He put the situation starkly: “We’re talking about an existential issue, like the future of the planet. And for me, as a new parent of two young children, then every day as a politician I’m thinking constantly about what I can do to bequeath to them a liveable planet. It doesn’t get bigger than that.

Tall ship to sail into Saundersfoot in 2022