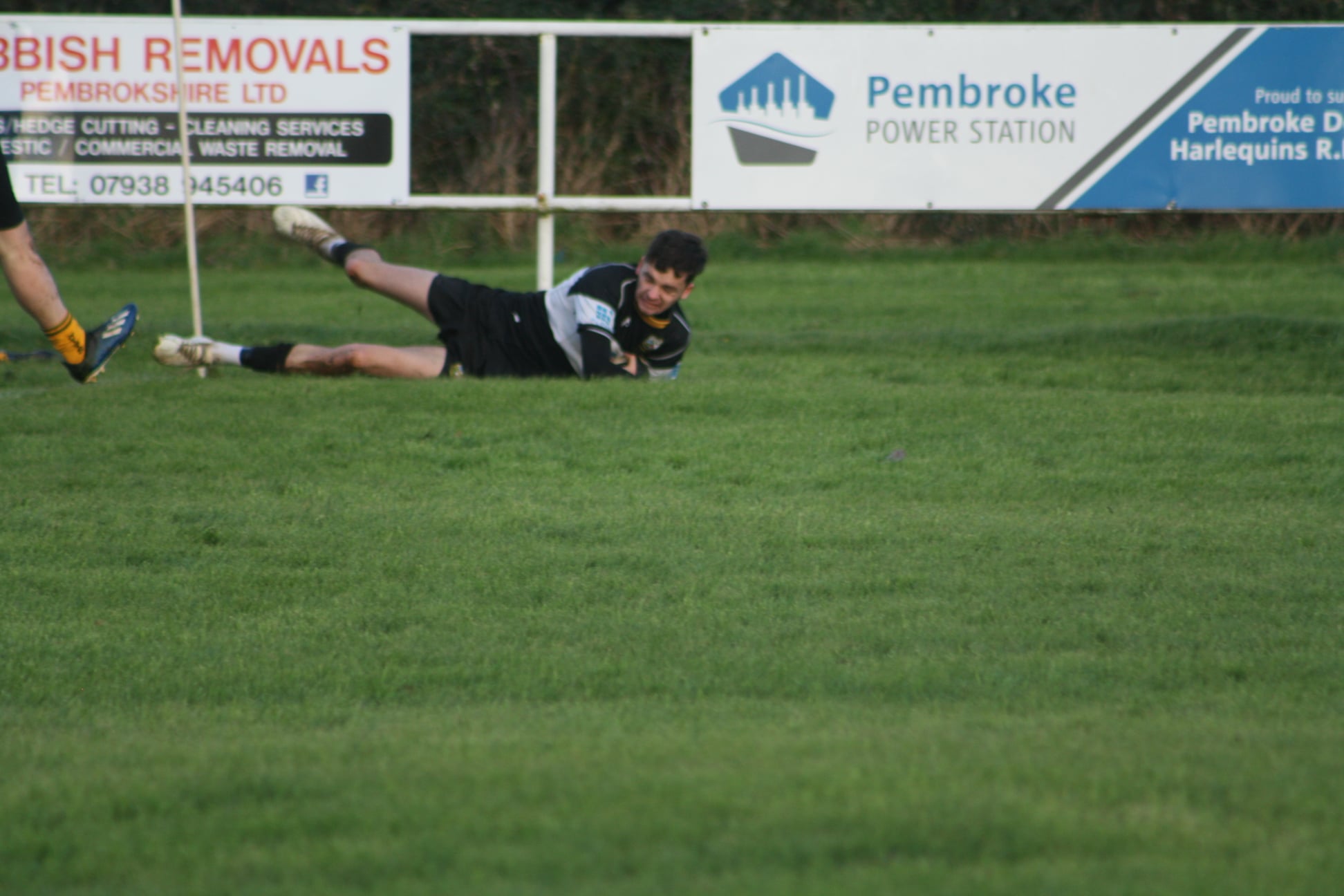 PEMBROKE DOCK HARLEQUINS pulled off their first league win of the season on Saturday (Dec 4) as man of the match and captain Harry Owen scored a hat trick of tries in their 27-15 win over St Davids.

Owen was playing in the Centre instead of his customary position in the back row.

The Saints arrived full of hope after running the Quins close earlier in the season but had just fifteen players available.

The Saints were on top in the early exchanges, but it was the Quins who struck in the 12th minute when Harry Owen bulldozed his way over close to the posts. Outside Half Euan MacDonald added the extras to put the Quins 7-0 in front.

The Quins then spurned a kick at goal from a penalty as they went in search of more tries. They were soon rewarded when Centre Jamie Williams forced his way over in Dimock’s corner for an unconverted try.

The Quins at this stage were looking fairly comfortable although the scrum was struggling against the Saints’ eight.

Saints Outside Half Aaron Foster pulled three points back with a well struck penalty to narrow the gap to 12-3.

The Quins then struck again with the best try of the match when Flanker Liam Scourfield finished off a fine move with a try again in the corner to stretch the lead to 17-3.

Confidence was now growing for the Quins, but they were soon brought back down to earth when the visitors struck as Saints’ Centre Kieron Price picked off the Quins, with an interception and raced away to score under the posts. Aaron Foster converted to pull the score back to 17-10 to complete the first half scoring.

As the second half started the game now was up for grabs, whoever scored first was going to have a major say on the outcome of the match.

The Quins had Harry Owen, Hywel Baker and Jamie Williams causing huge problems with their strong running and with the quick feet of Jamie Topp and Aaron Cookson, it looked like just a question of time before the Quins grabbed the all-important bonus point try.

The Quins soon hit the Saints hard when captain Harry Owen touched down for two more unconverted tries to end the Quins scoring.

The Saints however were rewarded with an unconverted try from Prop Dan Murphy in the last move of the match on what ended up a very cold day for all concerned.

Tish beat Neyland to move out of bottom two