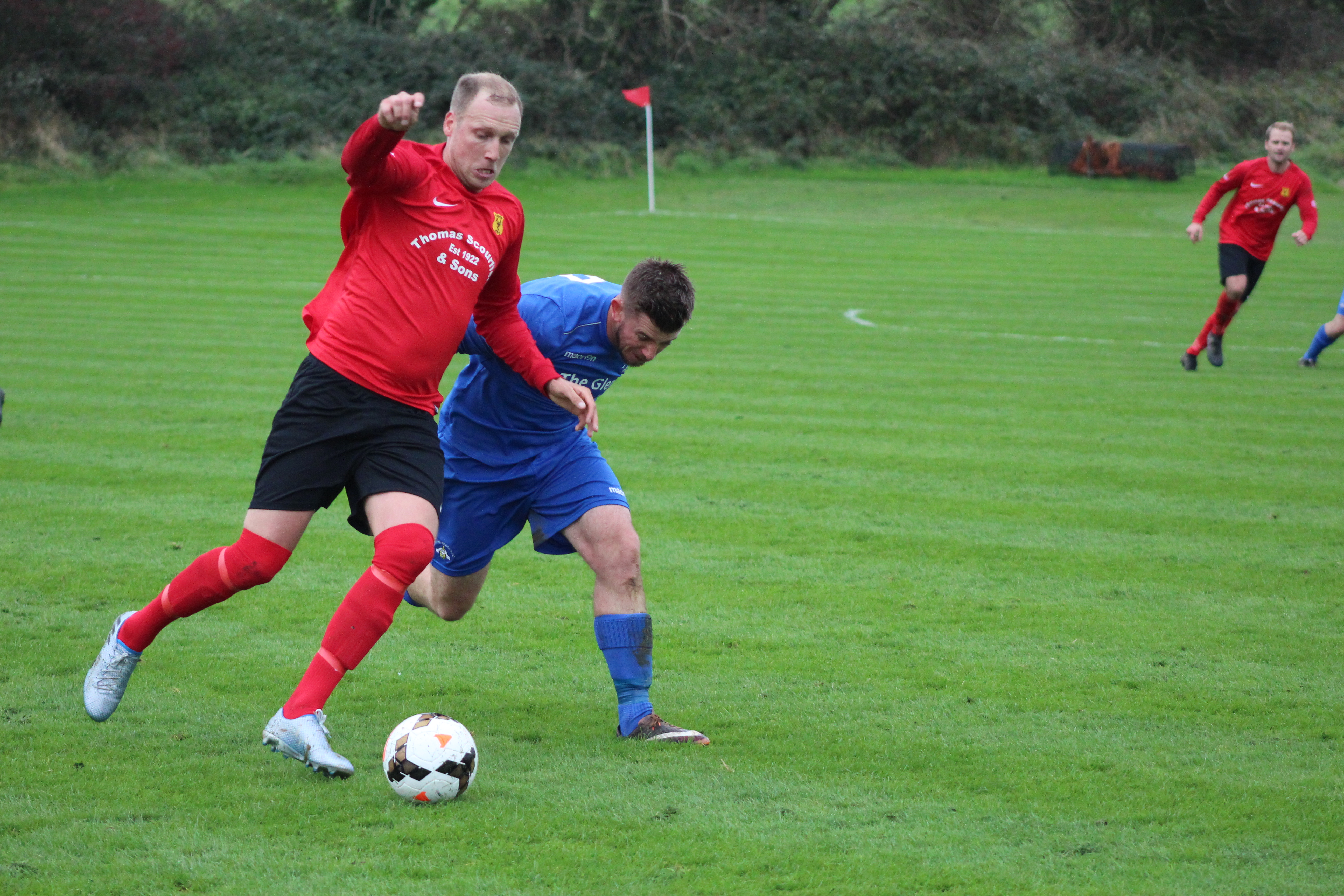 MERLINS BRIDGE fought back from 3-1 down to earn a draw against Carew in an excellent match on Saturday (Oct 28).

Going into the match, Carew sat second and Merlins Bridge were third and with both sides level on points, they were keen to keep up their good start to the season with another victory.

It was Merlins Bridge who the first chance of the game with a minute gone when a corner from Joey George was headed wide by Peter Thomas.

However, Carew went up the other end of the pitch and almost scored themselves as the dangerous Jack Christopher beat the offside trap but Wizards keeper Gary Thomas came out well to block his effort and the following effort by Ian Derbyshire was also saved.

Joey George then went down in the box but no penalty was given by referee Alan Boswell.

With eleven minutes gone, Will Haworth won a corner which George swung into the box and Nathan Greene met it with a towering header only to see his shot blocked on the line by Derbyshire. Three minutes later Carew took the lead as Alex Bayley crossed from the left hand side and Jack Christopher rose to head the ball down into the net.

They could have doubled their lead soon after when Jack played in brother Sam Christopher but his shot was blocked by an excellent covering tackle.

George then played in Luke Heywood but his fizzing cross ran across the face of goal with no one on the end of it to knock it in.

With half an hour gone the Wizards were back level as Will Haworth turned and saw his shot well saved by Carew keeper Dan James but the rebound fell to Matthew D’Ivry who drilled the ball low into the net to make it 1-1.

Seven minutes before half time Jack Christopher won a free kick 25 yards out and he stepped up to take it. The striker brilliantly curled the ball over the wall and it went in off the left hand post, leaving keeper Thomas with no chance.

Shortly before half time the ball was again played through to Jack who ran on before firing into the roof of the net to complete his hat trick and make it 3-1 to the Rooks.

The Wizards came out for the second half, determined to make up the deficit and also keep intact their unbeaten start to the season.

Eight minutes in they pulled a goal back when a corner was headed in by Ashley Beck.

Greene was then sent through and he beat the defender but his shot was saved by the Carew keeper.

On the hour mark, Luke Heywood also came close to scoring but his shot was blocked on the line.

With fifteen minutes to go, a throw in was flicked on by James Hinchcliffe but Sam Christopher’s acrobatic effort went wide. Chance: Alex Bayley’s curling effort comes back off the post

They had another chance soon after when Jack Christopher held the ball up well before passing to Alex Bayley in the box but his curling effort rebounded back off the post.

Then with ten minutes to go the Wizards finally drew level as a free kick from Gary Thomas found its way to Luke Heywood who cut inside before firing into the bottom left corner of the net.

Jack Christopher came close to a fourth goal when his long range effort from just inside the half way line only just flew over the top of the net.

A late head injury to Ashley Beck disrupted play and although the Wizards pushed forward in the closing minutes, they were unable to find a winner.

Both sides settled for a 3-3 draw which sees them slip to fourth and fifth respectively following wins for Narberth and Neyland.

On Saturday, November 4, both sides take a break from league action once more as they take part in the second round of the West Wales Cup.

Carew are away to Glynneath Town while Merlins Bridge are at home against Penclawdd.

Williams to lead Scarlets in first home derby of the season