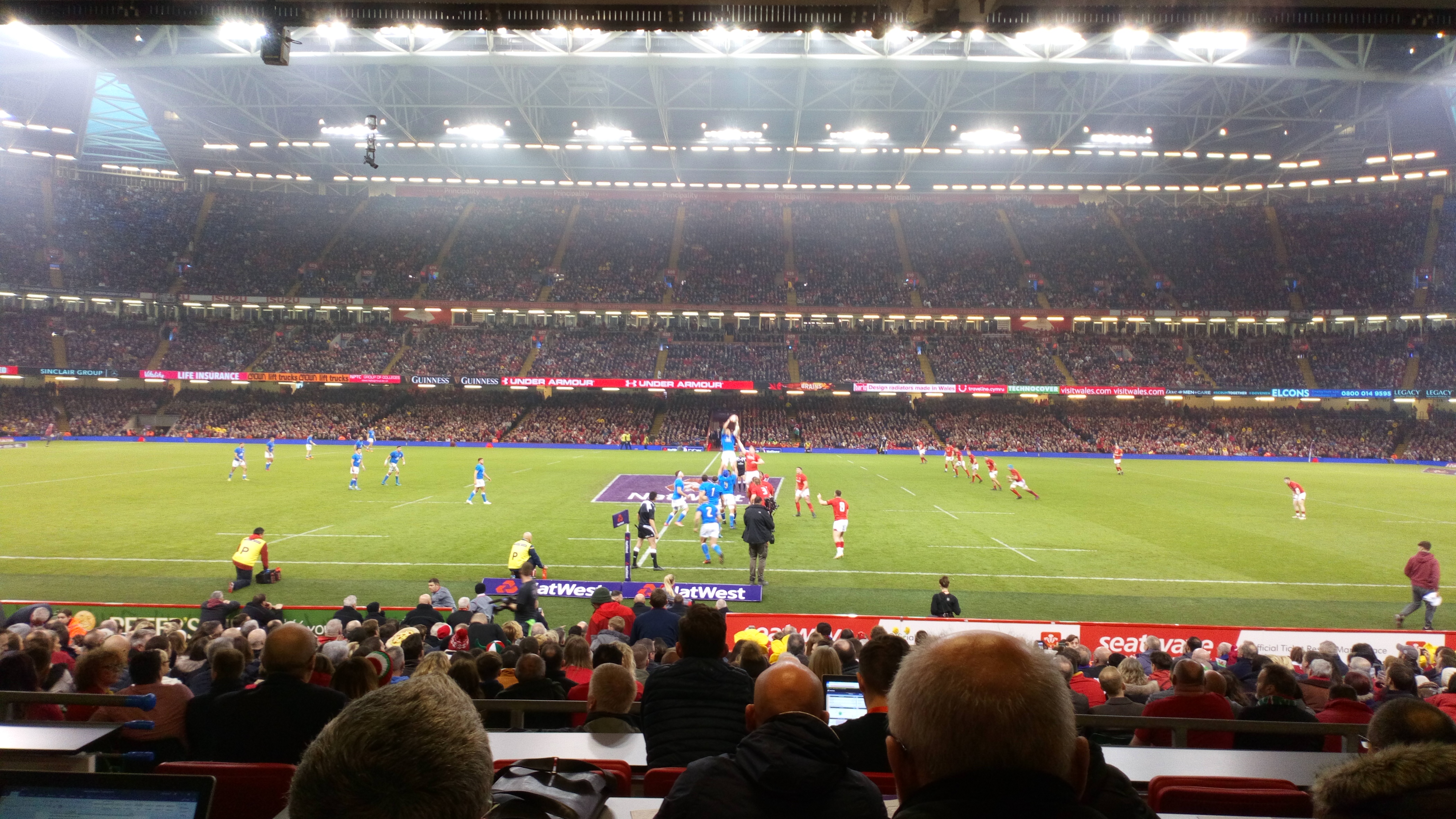 WALES gave themselves the best chance of finishing second in the Six Nations Championship as they beat Italy 38-14 at the Principality Stadium on Sunday afternoon (Mar 11).

Italy kicked off following a rousing rendition of Bread of Heaven and it wasn’t long before the Welsh Dragon roared into life.

Wales turned the ball over before winning a penalty which Gareth Anscombe kicked to touch. From the resulting line-out Wales worked the ball to the middle of the field and Hadleigh Parkes burst through the tacklers to touch down under the posts. Cardiff Blues kicker Anscombe added the extras.

From the kick off Italy won the ball back but Owen Watkin intercepted a pass and ran into the 22 before offloading to George North who went over for the try and Anscombe once again added the extras.

Any thoughts the home side had of an easy afternoon soon evaporated as Italy worked the ball over to the left hand side for Zebre’s Matteo Minozzi who reached over in the corner after breaking the tackle of Liam Williams. Tommaso Allan then added the conversion.

Wales continued to put the pressure on with kicks into the Italy 22 and on 16 minutes they nearly had a third try but a knock on prevented debutant James Davies from going any further. From the resultant Italy scrum Wales were able to win the ball back and they thought they had their third try as Williams passed to Steff Evans on the left wing who kicked inside towards the posts and Gareth Davies ran on to touch the ball down.

However, French referee Jerome Garces went to the TMO to check if Davies was in front of the kicker which video replays proved to be correct and the try was ruled out.

With twenty minutes gone it was Italy’s turn to for a spell of pressure but a loose pass saw Williams kick the ball forward and pounce on it just past the halfway line only for Italy to win the ball back.

Captain Taulupe Faletau was doing his best to show why he had been given the armband for the game and he produced one of the biggest hits of the game as he floored Italy kicker Allan. Thankfully after a few minutes of treatment he was back on his feet.

Italy again had a good spell of pressure and won the ball twice in quick succession from turnovers before being given a penalty. Allan, perhaps still feeling the effects of that monstrous hit, sent his kick wide of the posts and the score stayed at 14-7.

Shortly before the break Wales won a penalty and Anscombe showed his fellow kicker how it was done as he increased the lead to 17-7.

On the stroke of half time the ball was kicked to the left hand side but Steff Evans couldn’t quite collect the ball and he knocked the ball on. Italy’s Minozzi ran in to collect the ball with Liam Williams also running in close behind who made another crunching tackle on the Italian.

Referee Garces again went to the TMO as replays showed Williams’ shoulder catching Minozzi on the cheek. After some delay, Garces showed Williams a yellow card, much to the anger of the Welsh fans.

The second half started with Wales a man light but that didn’t seem to affect them as they went in search of a third try.

Davies charged down a clearance kick giving Wales a scrum which saw Davies pass to Cory Hill who stretched his way over for that third try and Anscombe added the extra two points.

Moments later, Italy attacked but Davies was deemed to have knocked the ball on deliberately and he was given a yellow card, meaning Wales were two men light, albeit for another two minutes.

Williams’ penalty ended but Coach Warren Gatland decided he would bring Halfpenny on in his place, and he got one of the biggest cheers of the afternoon as he entered the field.

Dean Budd and Tommaso Benvenuti tried their best to get Italy back into the game but some good defending from Wales meant they were unable to go any further.

James Davies then passed to Faletau who in turn found Justin Tipuric but he knocked the ball on and the chance had gone.

With 65 minutes gone, Patchell offloaded quickly for George North who dropped down for his second try of the game and Wales’ fourth giving them a bonus point. Halfpenny then added the extra two points.

With ten minutes to go Patchell found Parkes who threw a lobbed pass out to the wing where Tipuric was on hand to collect and touch down in the corner for Wales’ fifth try and Halfpenny converted again.

With five minutes to go, Italy looked to restore some pride and it was sub Federico Ruzza who found Mattia Bellini who touched down before Allan added the extras.

The bonus point win puts Wales second in the table, a point ahead of England and France and with one final round of games to come, Wales will be hoping they can finish in style.

On Saturday (Mar 17), Wales take on France, also aiming to finish second, at the Principality Stadium (Kick off 5pm) while Six Nations Champions Ireland take on England at Twickenham (2:45pm).