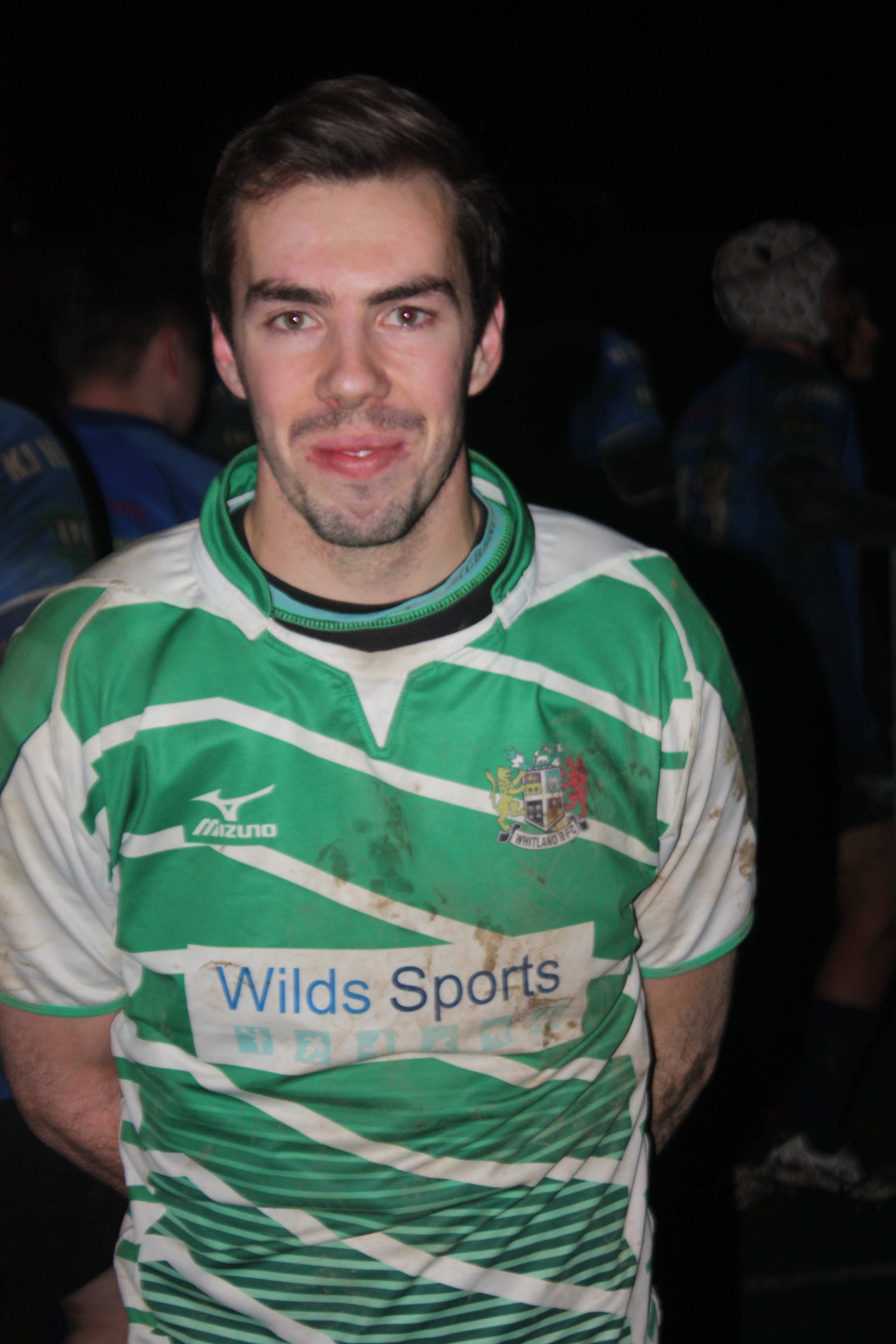 The ‘Green Machine’ ran in seven tries in total alongside a penalty and five conversions from captain Nico Setaro, the outside half having another fine game alongside dynamic flanker Ryan Morgan and man of the match, winger Sean Coles.

The speedster ran in a hat trick of first half tries as he put on the after burners to cause havoc amongst the visiting back line before crossing for the bonus point try early in the second half as he collected the ball on the halfway line before ‘jetting off’ on a mesmerising run once again leaving all and sundry in his wake.

Centre Johnnie Thomas scored the final try wide out after full back Scott Newton, in his last appearance before heading to Australia for a ‘gap year’ got on the score sheet and there was a resounding cheer from a hearty crowd when veteran second row Dai Ebsworth crashed over for his sides fifth try.

Whitland play the game with energy, ingenuity and guile guided by the magician at pivot, where the platform is set by the forwards which includes another veteran in the boiler house in Raff Williams.

Flanker Morgan, responsible for setting in motion the opening score as he took a clean catch at a line out in his own half before taking the opportunity to plough through the opposition tackles over 40 metres; fellow back row colleagues, number 8 Jack Mason and Danny Evans were on hand to recycle the ball allowing Setaro the time to put in a cross field kick, where Newton took the ball in his stride to draw winger Rhys Gear and set Cole away to scoot round under the posts for a 10-0 lead after 11 minutes.

Setaro, conducting the plan set by coaches Gareth Bennet and Jon Mason to ‘win the game first and foremost’ thrived off the acclaims as he pumped line kicks to turn the Loughor forwards on their heels, one 55 metre punt setting up the scenario of a Morgan catch and drive, recycled ball from scrum half Tom Parry through the hands of Centres Josh and Johnnie Thomas to Newton.

Cole received the ball 35 meters out and put in a kick over the top and collected as winger Josh Thomas fumbled the ball on his own line and a 17-0 lead after the first quarter was completed.

Cole’s hat trick came with four minutes of the half remaining as Setaro caught an up and under to call a ‘mark’ in his own 22 metre area, taking a quick tap and go which released winger Liam Price for a 30m gallop down the stand side where he could have been ‘Native River’ at Cheltenham earlier in the day.

Josh Thomas was direct in clearing out the opposition to set up the ball for the back line to again free Cole, whose kick ahead saw him out pace Newton and visiting centre Peter Smiriglia for the score and a 24-7 half time lead.

Loughor had scored their own converted try after half an hour as scrum half Tom Davies touched down following a sustained period of pressure, to capitalise on a yellow card for home flanker Evans as Irish referee Gerard English, based now in Porthcawl drew the home crowd to hum tunes from Welsh folk legend Max Boyce.

All levels of rugby now have teams well drilled and sensitive to opposition tactics and there is a fine line between defence and infringement, but being reduced by a player gives an advantage where a score often follows, something Bennet will be wary off as during the seasons climax.

Credit the green and whites, sponsored by GD Harries and Sons, as the forwards with props Aaron Mayne and Michael Ryan and front row colleague Gethin Lewis dominated the scrum set piece despite being a man down. The Loughor pack, for so long in the match strong and secure began to wilt as the second half points rattled up and not even a second yellow card to Josh Thomas for ‘crossing’ deep in the second half could halt the progress.

Bennett was able to put second row Trystan Lewis into the cauldron for a debut as the youngster returned after a two year recuperation from a knee reconstruction, the former Scarlets academy and Carmarthen Quins player getting a run out last week with Ferryside in readiness for his debut.

“Having set ourselves up for victory, I asked the players at half time to search for that bonus point try and for 20 minutes after the break we were excellent in our execution of play. I have a group of players who are not only fit but eager to play for each other, all of whom enjoy having the ball in hand” said a delighted Bennett post-match. “Sean (Coles) came into his own tonight and showed what he is capable of on firm ground, although I could talk up all nineteen players in the squad for their efforts.”

Whitland have nine fixtures remaining, sitting 11 points adrift of table toppers Hendy with three games in hand and the midweek meeting, scheduled for early May a potential ‘winner takes all’ encounter.

Equally important in the quest for promotion is the six point gap and game in hand they have over Pontarddulais in third place.

Bennet and Mason will prepare the side for their next fixture at relegation threatened Amman United on Saturday (Mar 24) before local rivals Fishguard visit Parc Llwyn Ty Gwyn on Saturday (Apr 7).

It’s reassuring for chairman Jason Bowen to feel at home watching the games after he underwent major heart surgery in early March, the enigmatic smile and demeanour not effected by any stress as the green machine rumbles forward.