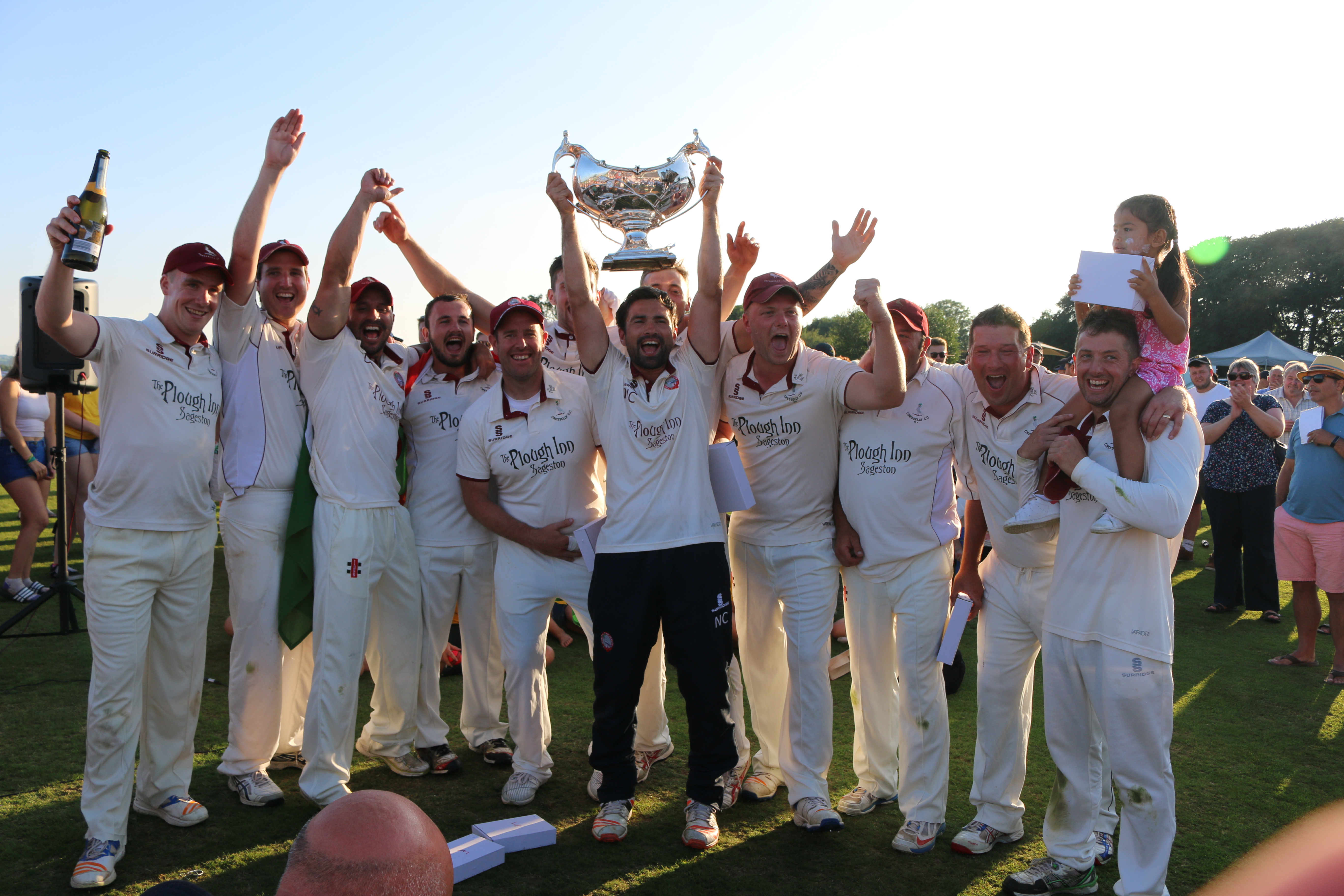 CRESSELLY were crowned Harrison Allen Champions for 2018 on Sunday (Aug 5), as they beat Lawrenny by 25 runs in a thrilling final.

The final was played in glorious sunshine in contrast to the heavy rain that had forced the game to be called off the previous week (Jul 28).

Like last week Lawrenny again won the toss and elected to field despite the good conditions.

Lawrenny did strike first however as they removed Dan Sutton early on before two more wickets reduced them to 56-3 off the first ten overs. Adam Chandler and Alex Bayley then stole the show as they reached 84-3 after thirteen overs.

25 runs then followed in the next over as Cresselly turned on the style with some excellent shots.

It was then Chandler’s turn to reach his half century in the twentieth over as their partnership past 100 to put Cresselly in control on 167-3.

The two batsmen continued to smash the ball every which way they could as Chandler finished the innings not out on 57 while Bayley was not out on an outstanding 79.

That took Cresselly to an imposing total of 194-3 from their first 22 overs. Lawrenny knew they would need to bat well if they were to at least match Cresselly’s score but their reply did not get off to the best of starts.

Simon Cole, Steve Lewis and Patrick Elliot were all sent back in the hutch as Ryan Lewis took two wickets and Mike Shaw picked up the third leaving Lawrenny on 3-3 after just two overs.

The rebuilding effort began as Harry Thomas made his way to 26 and James Phillips to a score of 23 as Lawrenny recovered to reach 56-3 off 10.

Thomas and Phillips continued to play well in the middle as they took Lawrenny to 93-3 off 14 overs.

Their partnership stood 94 but Cresselly eventually made the breakthrough as James Phillips was run out by Mike Shaw on a score of 39.

Dan Sutton then picked up another run out with a direct hit and Lawrenny were now 108-5 off 16 overs.

Danger man Brad McDermott-Jenkins was then bowled by Shaw as Lawrenny slipped to 111-6. Harry Thomas had made his way to an excellent score of 70 but he was then removed by Dan James to leave Lawrenny on 130-7.

Dan Cherry returned to take two wickets in the final over as Lawrenny finished their innings on 146-9, giving Cresselly a lead of 48 at the interval.

Cresselly then set about taking the game from their opponents and they reached 27-0 after four overs giving them a lead of 75.

Lawrenny eventually made the breakthrough as Chandler departed on a score of 27. Sutton was then bowled on a score of 38 and soon after Iwan Izzard was sent back to the dressing room leaving Cresselly on 72-3.

Alex Bayley and Dan Cherry looked to rebuild for the hosts 89-3 off 15 overs.

Bayley could only add a score of 10 to his first innings knock before he was trapped leg before in the fifteenth over.

That soon became five as Lawrenny did their best to keep the lead down but with four overs to go, Cresselly held a lead of 158 with the score on 110-5.

Another run out checked Cresselly’s momentum as they reached 144-6 with Dan Cherry not out on 41.

They eventually finished on 149-6 meaning Lawrenny would need a mammoth 198 to win the Bowl Final.

Lawrenny got their reply going with a four off the first ball but they were soon in trouble after losing two quick wickets.

They reached 28-2 off the first four overs and 38-3 after six. That soon became 47-4 and Lawrenny were in danger of letting the game slip away from them. They reached 65-4 after 12 overs needing 133 to win from the last ten overs. They did their best as the start of the next over saw two sixes and a four.

Cresselly were doing their best to stem the flow of runs but there was controversy in the fourteenth as Lawrenny fans claimed a four despite the fielders getting round to the ball, just two according to the umpires and Lawrenny were 90-4.

Joe Kidney was in good form for Lawrenny as he hit a six to make his way to a score of 48 but he was bowled as he went for another big shot.

Lawrenny continued to go for the big shots but two more wickets left them 111-7 after seventeen overs.

Two more wickets fell but Lawrenny refused to go down without a fight as Brad McDermott-Jenkins played a number of good strokes.

Lawrenny reached 160-9 off 21 overs and with 38 to win, the Bowl, barring any errors, was going to Cresselly.

McDermott-Jenkins continued to put on a show at the end and hit a six with the last ball to finish not out on 52 as Lawrenny finished their innings on 173-9.

That earned Cresselly a 25-run victory and they celebrated their first Bowl win since 2009.

Following the game, Pembroke County Cricket Club Chairman Paul Webb thanked everybody for attending the final and Cresselly and Lawrenny for an excellent game of cricket.

On receiving their runners up trophies, Lawrenny captain Joe Kidney congratulated Cresselly on their victory and thanked their set of supporters.

Cresselly’s Alex Bayley was also named as the man of the match for his excellent score of 79 not out in the first innings. Speaking to the Herald after the presentation, Cresselly captain Neilson Cole said: “Lawrenny are a very dangerous side and Joe is one of the nicest guys I know and I’m sure he’s one hell of a skipper and they battled well today and they’ll be competing for the Bowl in the coming years, no doubt.

“It’s amazing, we’ve come so close, third time lucky. We’ve put our supporters through a lot the last couple of years and we’re just delighted to deliver it.

“Having played in the final before we know in the first innings, you can certainly lose it if you don’t get it right, Bayley’s innings was so important and he’s done it so many times for us in the bowl and rightfully man of the match today as that was the innings that turned the match.”