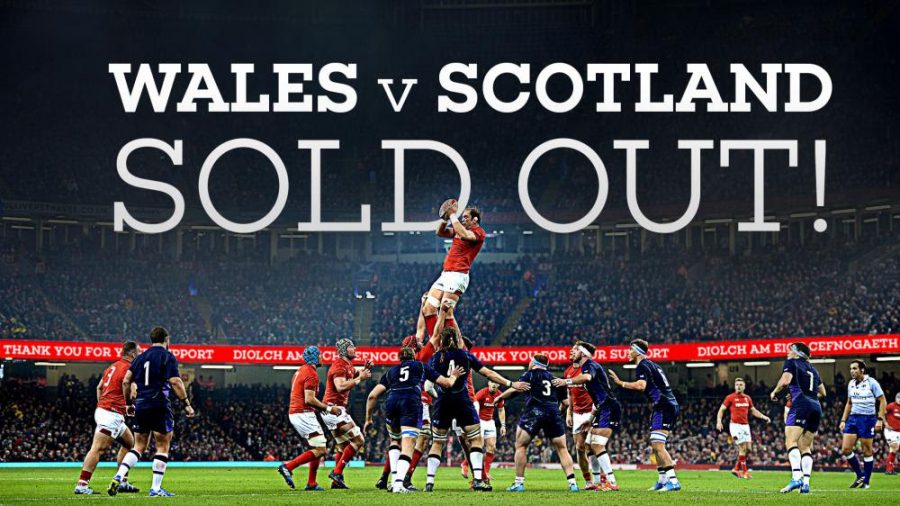 WALES’ final Guinness Six Nations clash of the 2020 Championship – against Scotland – has sold-out.

The tournament climax for incoming head coach Wayne Pivac on Saturday, March 14, will be played out at a full capacity Principality Stadium in front of a 73,931-strong crowd baying for Welsh success.

Pivac opens his first Six Nations campaign, after taking over the head coach reins from incumbent Wales boss Warren Gatland, in Cardiff against Italy on Saturday 1st February with limited tickets (including U16s tickets at £20) still available for this game.

In all over 200,000 tickets have been sold for Wales’ three home matches in the competition and the round three meeting with France, on Saturday, February 22, is set to follow Scotland in posting up the sold-out signs in the next few days.

The last time Wales faced the Scots, the Azzurri and Les Blues at home following a Rugby World Cup was the 2016 Six Nations, when all three matches sold-out before a ball was kicked, a factor directly influenced by a successful run in the tournament.

In Pivac’s first game in charge he leads Wales against a Barbarians side which will be led by his predecessor at the helm for Wales, Gatland, at Principality Stadium in November.

The Barbarians match has sold over 40,000 tickets to date, but also still has availability for U16s, at £10, with remaining adult tickets starting at £30.

Remaining tickets for Italy and France in the Six Nations and for the Barbarians game are available now from a Welsh rugby club near you, online at www.wru.wales/tickets, in person at the WRU ticket office or by phone 0844 847 1881 (calls to this number cost 7p per minute plus your company’s access charge) – maximum purchase limits apply.

Principality Stadium Official Hospitality Packages are available for all matches from 02920 822309 or visit www.wru.wales/hospitality, with Premium hospitality available for the Barbarians game and limited availability in The Players’ Lounge for Italy.

The WRU strongly advises all supporters to make sure they always ‘buy official’, only tickets bought from official sources (member clubs, official partners or the WRU direct) are guaranteed by the WRU – with tickets sold via unlicensed operators often cancelled and entrance regularly and regretfully refused on void tickets.