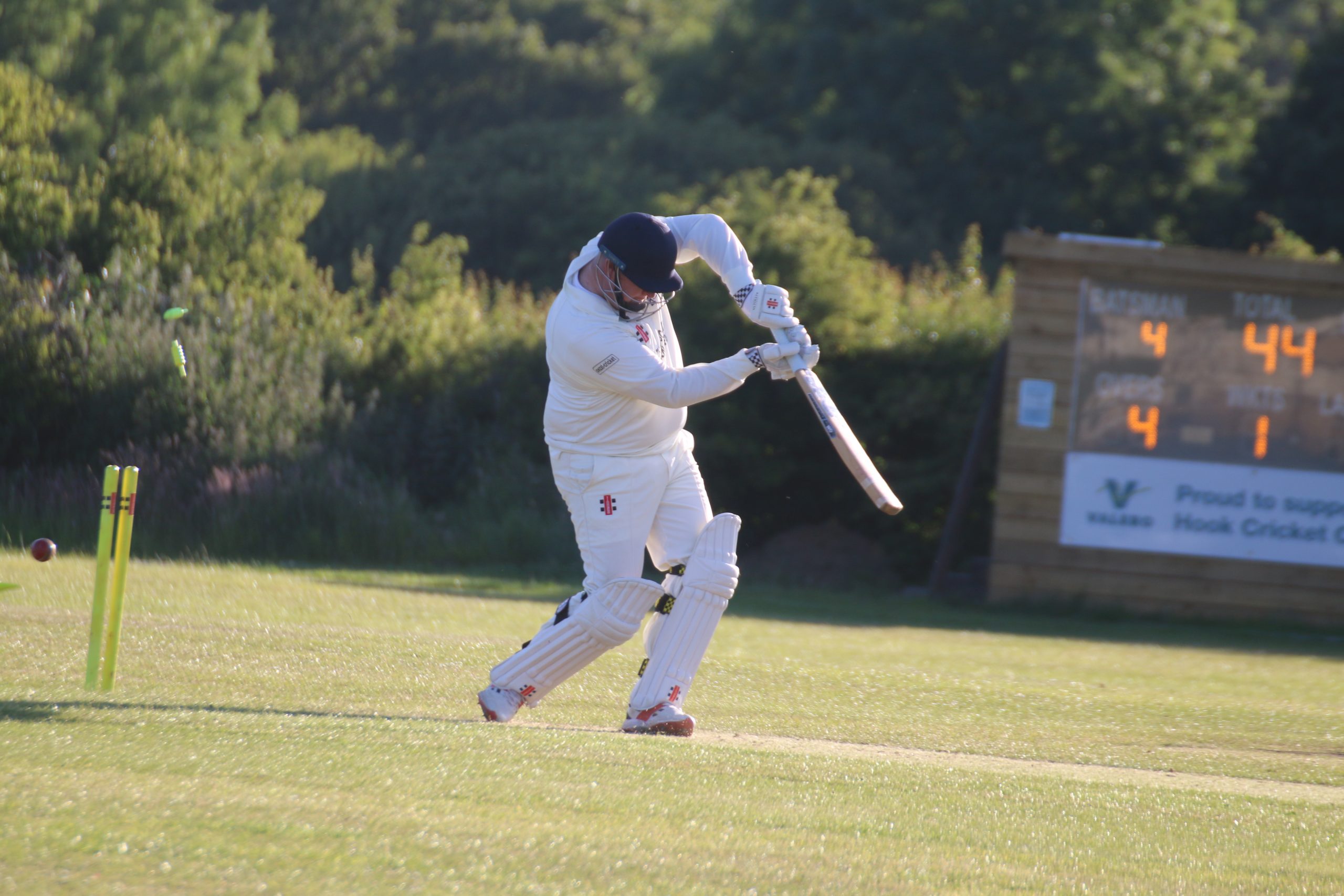 HAVERFORDWEST reached the quarter finals of the Alec Colley Cup on Tuesday night (Jun 14) as they beat Hook by 32 runs.

Hook won the toss and chose to field and were able to bowl Town out for 150, with all four of the home side’s bowlers claiming wickets.

Chris Phillips hit two fours early on but he was then caught by Jamie Phelps off the bowling of Brennan Martin.

James Marchant was then trapped leg before by Martin and Oscar Willington bowled Ross Dewstowe to leave Town on 39-3.

That became 48-4 as Archie Thomas was caught by George James off the bowling of Willington.

Dan Field and Jack Peters looked to steady the innings and they shared 24 runs for the fifth wicket.

Peters found the boundary once but then saw himself bowled by Jamie Phelps.

Field and Andy Williams then shared the best stand of the match as they added 48 runs for the sixth wicket.

Field had hit eight fours and three sixes in his knock of 71 but he was run out by Craig Nutty.

Rhys Phelps then bowled new man Simon Williams and he also did the same to Andy Williams, who had scored 21, soon after.

Dean Flood was run out by Jamie Phelps late on as the visitors looked to add more runs to their total.

Matthew Vaughan was also run out by Nutty but Teo Krol’s six saw Town to their total.

George James and Jake Wicks got Hook off to a good start in their reply as they shared 40 runs for the first wicket.

However, James was bowled by Archie Thomas on a score of 20 that had included a four and a six.

Thomas then did the same to Craig Nutty to leave Hook on 44-2 and he then made it 59-3 as he bowled Jamie Phelps.

Wicks and Dafydd Bowen then shared 17 runs for the fourth wicket but it was Simon Williams who made the breakthrough as he had Wicks caught by James Marchant on a score of 21.

They then lost their next four wickets for only eight runs as Town looked to secured their passage through to the last eight.

Bowen was trapped leg before by Simon Williams and he also had Brennan Martin stumped by Chris Phillips.

Lee Morgan became Williams’ next victim as he was caught by Ross Dewstowe and when Peter Franklin was bowled by Williams, Hook were 85-8.

Oscar Willington and Rhys Phelps added 33 runs for the ninth wicket. Willington finished unbeaten on 16 while Phelps was not out on 17.

They had left themselves with too much to do and they finished on 118-8.