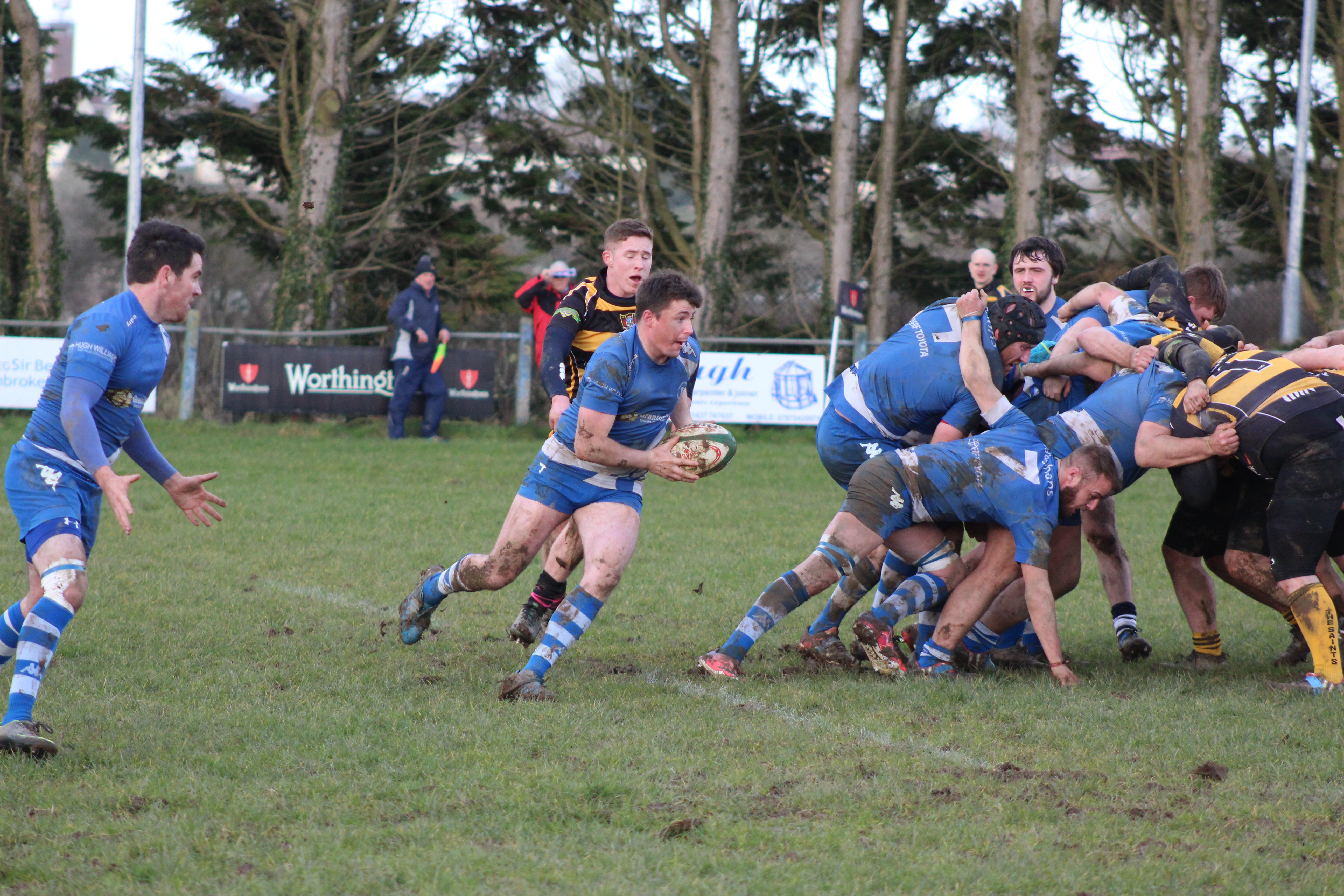 HAVERFORDWEST recovered from a poor start in their game with St Davids on Saturday (Feb 17), as they came from behind to record an eighth victory of the season.

As early as the first minute the Blues were on the back foot as a miss-placed pass saw the Saints kick the ball forward and when they caught up with the ball the Blues fouled which gave the visitors an early chance to take the lead.

Matty Mcleod was on kicking duties for the Saints but he sent his kick just wide of the posts.

Moments later, the Saints came forward once more but when a ruck was pulled down illegally, according to the referee, the visitors had a second chance to take the lead.

Mcleod again stepped up but he again sent his kick wide and the score remained 0-0.

The Saints were keeping the pressure on and that led to more Blues infringements before the visitors deservedly took the lead after ten minutes.

From a line out the Saints worked the ball out left and it was Rhys Morgan who powered his way over for the first score of the game.

Mcleod then found his shooting boots to send the conversion through the posts and give the Saints a 7-0 lead. Try: Rhys Morgan scores the opening try of the game for St Davids

However, almost immediately the hosts were level as a good break by Dan John saw him burst through and go over for a try. Ollie Hughes then scored with the conversion to level the game at 7-7.

Despite being pegged back the Saints continued to play well and even stole a line out from the Blues to set up their own attack.

With twenty minutes on the clock it was the home side who took the lead as good play from Hughes found Rhys Baker who went over in the right hand corner.

Hughes then converted from right out on the touchline to give the home side a 14-7 lead.

Early Blues infringements then came back as Dave O’Leary was yellow carded giving the Saints a man advantage for ten minutes.

They were unable to make their advantage count and it was the Blues who looked the more likely to score as the half came to a close.

A third score before the break would have been harsh on St Davids and it almost came but the referee called a forward pass when Josh Atherton appeared to be free.

That meant it was 14-7 at half time and the Saints were still very much in the game.

It was the Blues who started the second half better and they were rewarded when Hughes went over for a try of his own which he also converted to make it 21-7.

The Saints continued to have good spells in the game but were unable to find a way through as the Blues infringements of the first half seemed to disappear from their game.

The home side also came close to a fourth try which would have given them a bonus point but they were denied by a great tackle and the score stayed the same.

It was a great performance by the Saints and if they continue to play the way they did in the first half, positive results will soon come their way.

The teams must now wait for their next game due to the Six Nations but they return to action on Saturday, March 3, when the Saints are at home to Laugharne and Haverfordwest are at home to new league leaders Pembroke.

All Blacks keep Quins at bay